It Seems Like Not Regulating Homeschooling Doesn't Work Out So Well? 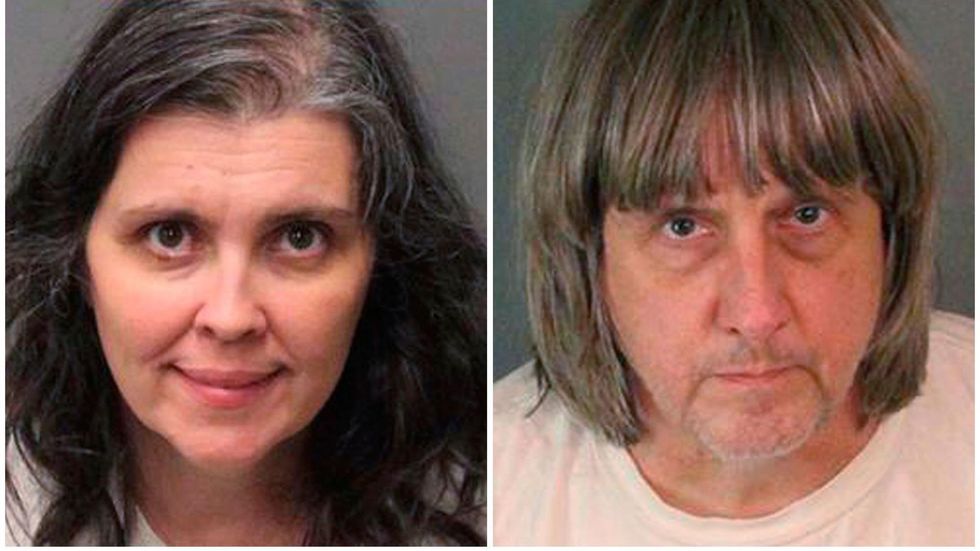 This past Sunday, 13 siblings, ranging in age from 2-29, were found in the home of David and Anna Turpin, malnourished and dirty and, in some cases, literally shackled to their beds with padlocks. They were discovered after one of the children escaped and called 911. Many of the children were so malnourished that they had to be hospitalized.

The Turpins were reportedly very religious and required their children to memorize the Bible.

The reason why this was all just being discovered now is because the children were homeschooled in California, a state which has extremely lax laws regarding the practice. They were never checked up on by anybody. All you have to do in order to homeschool your children in the state is to simply tell the government of your intent to do so. Had they been required to attend traditional school, had they even just been checked up on every once in a while, they could have been rescued a long time ago.

One of the functions schooling is supposed to serve is to provide a check against these things. This is so that if a child is abused they have someone to talk to, so if a teacher sees signs of parental neglect or child abuse they can solicit a welfare check on the family. With homeschooling in many states, there is no such check.

This means that parents like the Turpins have free reign, essentially, to torture their children. They are far from an isolated case.

The Turpin children were found chained to their beds. So was Calista Springer, a 13-year-old Michigan girl who died in a house fire in 2009 when she was unable to free herself. Christian Choate of Indiana was kept naked in a cage; he died in 2009, at age 13, but his death was not discovered until two years later. In Arizona, a 14-year-old girl was locked in a bedroom for more than a year and routinely raped by her father; she escaped by kicking down the door when the rest of the family was away and running two miles across town to the home of a friend from when she attended school.

In Ohio, a couple forced their 11 adopted special needs children to sleep in cages. As with the Turpins, those parents told investigators they believed they had done nothing wrong. Two sisters in Florida were locked in makeshift cages and whipped with leather straps. In nearby Georgia, Mitch Comer spent four years locked in a bedroom in his family’s home. When he turned 18, his parents put him on a bus to Los Angeles with pamphlets for homeless shelters.

And those are just cases of extreme abuse. They don't include the children who are simply not learning anything, or the children who suffer from social isolation. In 2014, transgender teenager Leelah Alcorn was pulled out of school by her parents, homeschooled and sent to conversion therapy. The combination of abuse, lack of support and social isolation led her to kill herself.

People can and do have very different experiences with homeschooling, and a lot of that depends on both their parents and the amount of regulation and oversight involved in the process. A few years ago, my friend and former co-worker Bronwyn Isaac wrote about her positive experience being homeschooled in Seattle, Washington, where the practice was more heavily regulated.

In Seattle, and surrounding towns, it was required that you portfolio your learning to the state in order to receive credits and eventually graduate with a high-school diploma. For many, myself included this meant attending an “alternative school” a few days a week where we attended classes for a handful of subjects, which we’d then supplement with independent subjects at home.

However, my other friend and former roommate, Jennifer Johnston, who got the Christian homeschooling treatment in Ohio, had a very different experience altogether, and now opposes homeschooling except for "kids who really can't attend traditional school," and believes it provides the perfect cover for parents who are abusive or neglectful.

I am outspoken against home education because of the lack of regulation. You can basically pull your kid out of school and never teach them and no one can do anything to stop you.

As an example, she cites 12-year-olds in her homeschooling group that could not even read, and an 8-year-old homeschooled child she met who was not only socially isolated, but whose entire education so far involved reading geology books.

Perhaps even more disturbing is the fact that only two states -- Pennsylvania and Arkansas -- require any kind of background check on parents before allowing them to homeschool their children. Pennsylvania won't allow parents who have been convicted of a number of things within the last five years to homeschool their children, and Arkansas prohibits convicted sex offenders from homeschooling -- which should really be the bare minimum.

The state of New Hampshire, legislators are currently debating whether or not to reinstate regulations on homeschooling that were done away with in 2012.

Homeschooling advocates like Ann Marie Banfield are not happy about this, and insist that such regulations don't actually benefit anybody.

“I can’t think of anyone who benefits from regulating the homeschoolers,” Banfield said. “It’s just not necessary. It’s not a big problem in the state, and there is an avenue if there is a problem with a homeschool family. You report it to the state, and the state can investigate. You’re supposed to be innocent until proven guilty.”

I would say that those regulations probably benefit the children? From my admittedly small sample group of people I happen to know who were homeschooled, it certainly seems as if there is a direct correlation between heavier regulation and having had a positive experience with homeschooling.

Perhaps unsurprisingly, a large number of homeschooling "alumni" are now very vocal about their opposition to the practice. The website Homeschoolers Anonymous provides a venue for them to discuss their often-traumatic experiences. Their stories are harrowing, particularly because so many of them could have been prevented with even minimal oversight.

While completely banning the practice of homeschooling would be unlikely, there needs to be far more regulation than currently exists. If all these former homeschoolers are saying there is something seriously wrong with the way they were educated, if so many of them are reporting abuse, if we keep seeing stories like the Turpin's house of horrors, something clearly needs to be done. These are children and they deserve to be protected and they deserve to be educated.

Homeschooling students must be checked up on and regularly evaluated, there must be general welfare checks, parents must undergo background checks and perhaps attend some form of training in order to qualify, there must be ways of evaluating these children to ensure that they are keeping up with their peers in traditional school -- and if certain regulations are not adhered to, those children must be put in school. We can't have situations where abusive parents are "homeschooling" their children in order to provide a cover for abuse.

If parents are doing a great job of homeschooling their children, that's wonderful. But those wonderful parents should be willing to accept a certain amount of oversight so that children with less-than-wonderful homeschooling parents do not end up in situations like the Turpins.