It's An April Ryan/Sarah Huckabee Sanders Death Match, And You Know That White Lady Ain't Winning 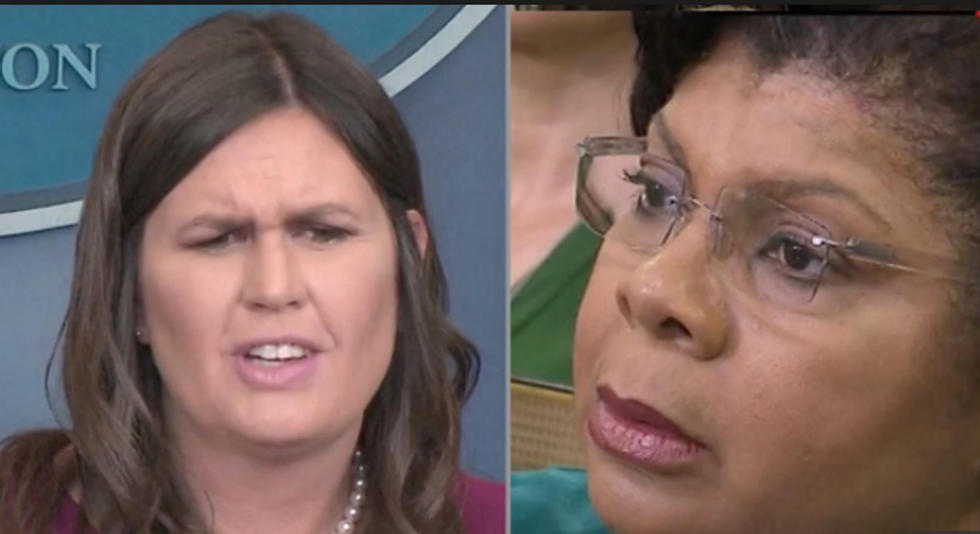 Is it bad that I want to see a Sarah Huckabee Sanders / April D. Ryan Deathmatch every day? It’s only been a few days since the last round but I feel like the consistent disrespect that Sarah Huckabee Sanders and the entire PussyGrabber Regime throw at her will only make April D. Ryan’s questions more bold and the reactions more strident. I want to speed up the process of ending The PussyGrabber and I think April Call Me D-Nice Ryan can help us get there.

I don’t know if you’ve noticed, but Sarah Huckabee Sanders really has a problem with April Ryan -- all black people, obviously, since Huck recently stated that police-sanctioned murder of black folks is not a federal matter -- but she has caught a case for April D. Ryan especialmente! Huckabee Sanders is a High Priestess of the Rotten Vadge (isn’t that the title of her Jim Carrey portrait?). Rotten Vadges are those ladies who are white first and women last. She's hellbent on continuing to insult Ryan with her drill-sargeant whispers coated with vocal fry.

So why is the hit always out on April Ryan? I suspect it started in February 2017 when The PussyGrabber, still on his honeymoon with Reince (Reince! Doesn’t that seem like a decade ago?), suggested that Ryan set up a meet and greet with the Congressional Black Caucus as a response to her question regarding inclusion: He knows them negroes all chop it up.

POTUS Frump asked whether Ryan should set up a pot luck with the blacks because he loves fish and grits as much as Taco Tuesday! Hard pass on the okra though, no veg for him! Mr. Wants to Fuck His Daughter must have had the veteran correspondent confused with His Numba One Black Girl At the Time Omarosa, who threw all sorts of inappropriate parties at the Whitest House. The CBC clapped back at the hapless Comb-Over POTUS in April Ryan's defense, so he must've greenlit the mistreatment of Ryan by every fool that works for him.

In March 2017, Hitler Scholar Sean Spicer, who clearly had his issues with everyone and his own emotions, successfully carried on the tradition of curating special sexist racist turd moments for Grown Ass Professional Woman April D. Ryan when he famously chided her "to stop shaking her head."

Did you know that Spicer was a graduate of the Kevin McCarthy School of Public Speaking? Makes sense, right?

In November 2017, Ryan brought up The PussyGrabber's twitter compulsion. Sarah Huckabee Susan Sarandon Sanders said, “I’m sorry, April. I’m going to keep moving," but when Ryan would not relent, Huckabee Sanders spat back, “April, I’m starting to regret calling on you first," with her signature forced "smile." That was an indication that Ryan is fully under the Pressed Secretary's skin and she ain't going nowhere despite the ongoing disrespect in addition to consistent death threats from the Foul Carnie Deplorables.

Another chapter in December 2017 had the press corps discussing The PussyGrabber's twitter assault on Senator Kirsten Gillibrand. After three other journalists brought up the same question in the same context, Huckabee Sanders went predictably unprofessional when Ryan's turn came around, stating only someone whose “mind is in the gutter" would interpret POTUS's tweet as sexual innuendo.

That's logic for you in The PussyGrabber Bacchanal of the Grotesque. Sure, the relationship between the White House Press Secretary and press corps has had testy moments throughout history, but this administration has taken it to a Sunken Place Jamboree of epic proportions. Maybe Huckabee Sanders was still upset about #Piegate (now you know that was a stock photo, Sarah Huckabee Miss Hilly Sanders. Ain't you tired, Miss Hilly? Ain't you tired? No?).

Sarah Huckabee Sanders has taken up the mantle to continue to disrespect the disrespected with gusto. White dudes often get grins when they going in as Brian Karem from The Sentinel did when he yelled at and went off on Sanders for “inflaming the Press Corps.” He gave her a figurative fat lip while she grinned, not at all ruefully as she’s known to do, until she finally called all of the media “outrageous.”

And then there was that time just last week when The April D. Ryan Show had the gall to ask if The PussyGrabber was stepping down. Valid fucking question when an FBI raid of POTUS's personal attorney had just occurred. Sarah Hulkabee Sanders had a fit, claiming the question was "absolutely ridiculous" with her cracked face surprised by the question. Hulk Smash!

What Sarah Huckabee Sanders doesn’t realize is that Her Majesty The Queen April D. Ryan hasn’t even begun to ask the truly uncomfortable questions that she'll continue to ask for all of us. She’s going to keep asking not at all ridiculous and quite fabulous questions like "is The Pussygrabber un-American? Is he a racist?" (Maybe she didn't call him The Pussygrabber. BUT SHE SHOULD.) Personally, I vote for “Has your racist rapist boss considered a plea bargain? Yet?” I expect, however, that a more realistic question soon to be posed might be, “We know you love a Big Mac, Mr. President, but did that young lady eat asparagus before filming? Looks like she might’ve eaten asparagus.”

Wonkette is ad-free and paid for ENTIRELY by YOU! Pay the ladies.