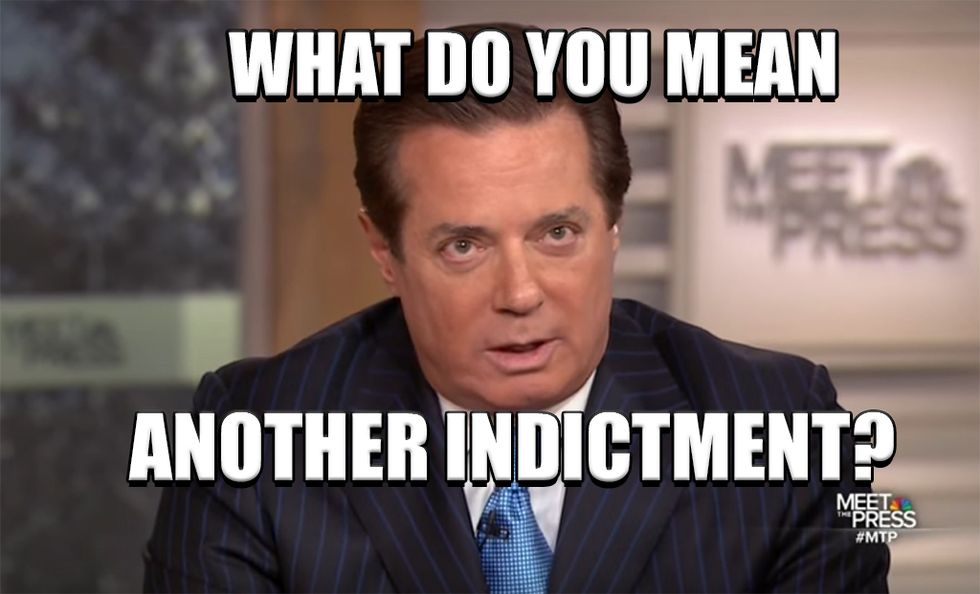 Morning Wonketariat! Here's some of the things we may be talking about today, but first check out some fishies!

There's a distinct possibility that Robert Mueller may slap a superseding indictment on Paul Manafort as his team uncovers even more dirty money and schemes.

In between rounds of golf, Trump has been on a Twitter tirade against the FBI over the holiday season, and is enlisting Congress creeps and talking heads to troll media outlets.

The FBI Agents Association is raking in Ameros in response to repeated attacks by Trump and his minions. The money helps the kids of fallen FBI agents go to college. Keep up the good work, jerks, college is expensive.

Congressional Trump-Russia investigators have had a chat with a Georgian-American businessman who may have helped set up that July 2016 meeting between DJTJ and the Russian lawyer lady.

Trump's cabinet members are hiding in their offices and refusing to release details of their schedules, potentially violating FOIA laws.

During a speech to the conservative Federalist Society, Scott Pruitt pondered the nature of "true environmentalism," stating that it's his duty to fuck up the planet, because if we don't burn all the oil and coal God put in the ground, "people may starve, may freeze," as there's no sun or wind in developing countries.

Grifty bastard Ryan Zinke's Interior Department has issued a new opinion on a 100-year-old law protecting migratory birds that was strengthened under the Obama administration because it hurt the pocket books of big energy companies.

Medicaid and Medicare chief Seema Verma wants to make it easier to warehouse olds by easing fines on nursing homes. Nothing says lovin' like geriatrics terrified of raising a stink.

A court has slapped HUD with an injunction for trying to stall affordable housing rules set to take effect on Jan. 1 that will let poors find cheap places to live.

The Library of Congress will no longer archive every public tweet, citing the increased length of tweets and the growing use of images. No, that's not a free license to start tweeting dick pics.

Tennessee Rep. Diane Black is stepping down from the House Budget Committee now that she's helped fuck over all the poors ahead of her 2018 gubernatorial run.

Officials from New York, Philadelphia and San Francisco are suing the Pentagon for hiding criminal convictions in the military justice system from the FBI's background-check database.

Deep in the heart of Trump Country, the brainwashed masses will make any excuse for Trump -- even if he lies, cheats, steals, or fails to make gold rain down from the heavens.

That Virginia House race that was already decided by ONE VOTE is being contested by its original winner, Shelley Simmonds, who is suing to toss the fudged ballot ahead of a drawing to decide the winner.

UN experts have been rolling their eyes at Trump's rhetoric, stating US cuts to the UN were part of unilateral negotiations, not some red meat for his bloodthirsty masses.

If you thought Trump's Muslim ban was terrible, you should meet Italy's Interior Minister Marco Minniti. It's suspected he's been working with North African militia groups to stop the flow of refugees into Italy in an effort to curb stomp Europe's migration crisis.

The British government is asking B. Barry Bamz and the fam to skip the royal wedding of Prince Harry and Meghan Markle because they're worried Trump might get extremely butthurt and start a mean tweetstorm.

Putin critic Alexei Navalny has been barred from running in the Russian elections, and told he'd better not try to organize a boycott, either. That's not going over well with the European Court of Human Rights and the Council of Europe, as if Putin cares about trivial international criticism.

A new report by the Justice Department's Inspector General finds "systemic" problems when dealing with sexual harassment complaints, like slapping offenders on the wrist -- or worse, just sweeping grab-ass allegations under the rug.

That pro-Trump singer is suing Corey Lewandowski for sexual assault after he ALLEGEDLY slapped her ass at Trump's DC trash palace.

"Alt-right" asshats have been helping fuel the Bitcoin bubble due to their fear that Uncle Sam might pick their pockets.

Speculation is mounting on whether billionaire Tom Steyer may run in 2020 as his NeedToImpeach.com website hoovers up even more info and sends out "thunderclaps" across social media.

Mike Huckabee saw a movie and now he thinks Donald Trump is like Winston Churchill, neglecting Churchill's humility, oratory skill, Nobel Literature Prize, excessive drinking and smoking, distinguished military service record during WW1, 50+ years of parliamentary service, 30+ years as a Minister, 9 years as Prime Minister, his outreach to foreign leaders, and the fact the Churchill never coddled Nazis, he bombed them them. But if Trump is Churchill, maybe he could at least establish socialized health care?

We're 100% reader funded, so if you don't give us some money to pay the bills we give you newses and nice times!