It's Election Day! Virginia, New Jersey, Get Your Butts To The Polls! 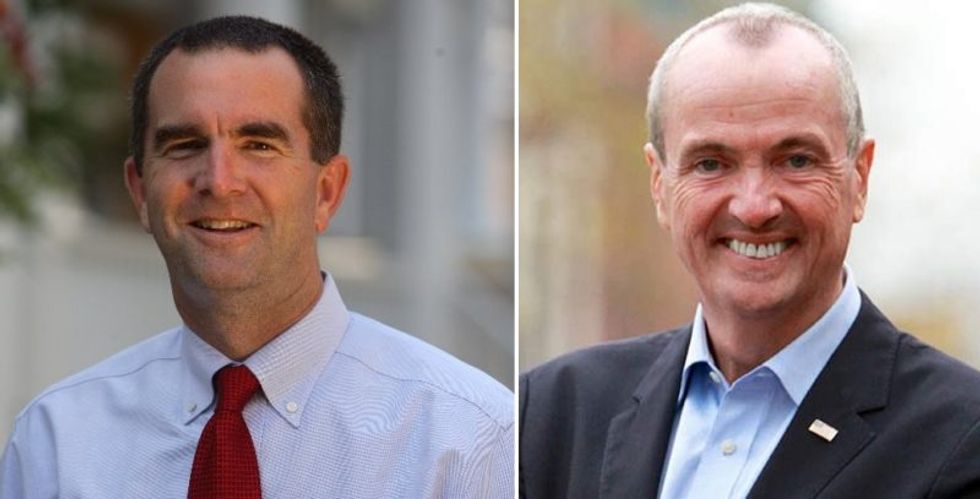 It's votin' time! Voters in New Jersey and Virginia will choose new governors, and in Virginia at least, the race between Democratic Lt. Gov. Ralph Northam and former Republican National Committee chair Ed Gillespie is being touted as a test of whether Trumpism without Trump can win an election for Republicans. In New Jersey, it's more a matter of who gets to clean up after Chris Christie, who hasn't really been interested in governing since Bridgegate. Won't it be nice to be mostly able to forget Chris Christie, at least until the next dumbass thing he says on cable TV?

Donald Trump Attacks VA Dem Ralph Northam, Gets More Than He Bargained For

Ed Gillespie, who for his entire political career has been a boring establishment Republican, has been doing his damnedest to run a Trumpian campaign full of culture-war issues to fire up the angriest possible voters, without quite inviting Trump himself to come campaign for him. Not that Trump hasn't tried, like that time he lied about Virginia's economy in a Tweet intended to attack Northam, and gave Northam and current Gov. Terry McAuliffe, who's term-limited, the chance to explain Virginia actually has better job growth than the national average. Trump was at it again this morning, of course, explaining that if Northam wins, he'll invite all the murderous drug gangs to tea at the governor's mansion:

And there he goes with the nonsense about Virginia's economy again. The polls leading up to today's election have been all over the place, but most have Northam and Gillespie very close. This is going to be a turnout election, so if you're in Virginia or you know someone in the state, make sure you / they get to the polls.

Watch Out Virginia! Ralph Northam Held Down Your Mother While MS-13 Raped Her, With Votes

Virginia's having a gubernatorial race. Time for shit to get stupid!

Scariest ad since Barry Goldwater nuked a little girl in a field of daisies.

WaPo reports that voters for both candidates have turned out in reaction to negative ads -- a lot of Democrats who were turned off by Gillespie's MS-13 gonna rape you ads, and some Republicans who say they were shocked -- SHOCKED -- by Northam's refusal to condemn anti-Gillespie ads run by a Latino PAC, depicting a Gillespie supporter's pickup truck menacing little minority kids. They even found one guy who said he was disgusted by the pickup truck ad ("very despicable and pushed me over the edge"), but who really likes Gillespie because he promises to crack down on "sanctuary cities," so thank heaven he's offended by stereotypes of Republicans as anti-immigrant.

Turnout is expected to be heavy for an off-year election; early voting was heavier than usual, and so is absentee voting, which set a record for the state:

The more than 147,000 absentee votes cast as of Friday night is the most for a nonpresidential year in Virginia history.

That's encouraging! Also, Democrats have increased their presence in down-ballot races. After years of not contesting many seats for the state legislature, this year, Democrats have fielded candidates in 54 of the 66 seats held by Republicans in the House of Delegates, which has been held by the GOP for 20 years. This could be a Big Freaking Deal, as Politico 'splainers: If Northam takes the governorship,

and Democrats can make pick-ups in delegate races in 2017 and 2019, they’ll have the power in 2021 to undo the GOP gerrymander that was instrumental in creating the Republicans’ 66-seat supermajority. Across the country, for Democrats to start exercising real power, they need to regain control of legislatures in blue-tinted swing states like Virginia.

With redistricting on the way after the 2020 census, it's going to matter more than ever which party controls state legislatures. Funny thing: You know who masterminded the Republican takeover of state legislatures before the last census? Ed Goddamn Gillespie, who's now trying to Trump himself into the Virginia governorship. Get your asses out to the polls, folks.

In New Jersey, the nationally-ignored gubernatorial race is between Democrat Phil Murphy, a former Goldman Sachs executive (ew), and Republican Kim Guadagno, currently Chris Christie’s lieutenant governor (EW!). New Jersey leans blue, went for Hillary Clinton in the presidential election, and is sick and tired of Chris Christie (who has a historic low 15% approval rating), so Murphy is favored, but that's no reason for Dems to stay home, because holy crap wouldn't that be awful if complacency let Christie's loot goober sneak into office?

At least Murphy has the decency to seem a bit embarrassed by his having been with Goldman Sachs, a name he tries to avoid saying during the campaign:

His website’s reference to his career at Goldman Sachs says Murphy “started his career at the bottom, working his way up to help lead a major international business by learning how economies grow and create jobs.”

Fortunately, if being a Wall Street Banker is a drawback for Murphy, having served as part of Christie's government is an even bigger yucch factor for Guadagno, who is having a difficult time talking about her experience without mentioning the guy. She insists she's running on her own record, but voters seem to notice the Christie stink all over her candidacy.

Now get out there and vote, ye Wonkers -- even though our headline says "Virginia and New Jersey," remember there are local elections all over the country today -- just don't expect Yr Wonkette to cover the tight race for Boise City Council tomorrow, OK?

Yr Wonkette is supported by reader donations. Please click here to help us keep the lights on and the writers paid!