It's The Anniversary Of Roe V. Wade So Get Yer Bortions While You Still Can 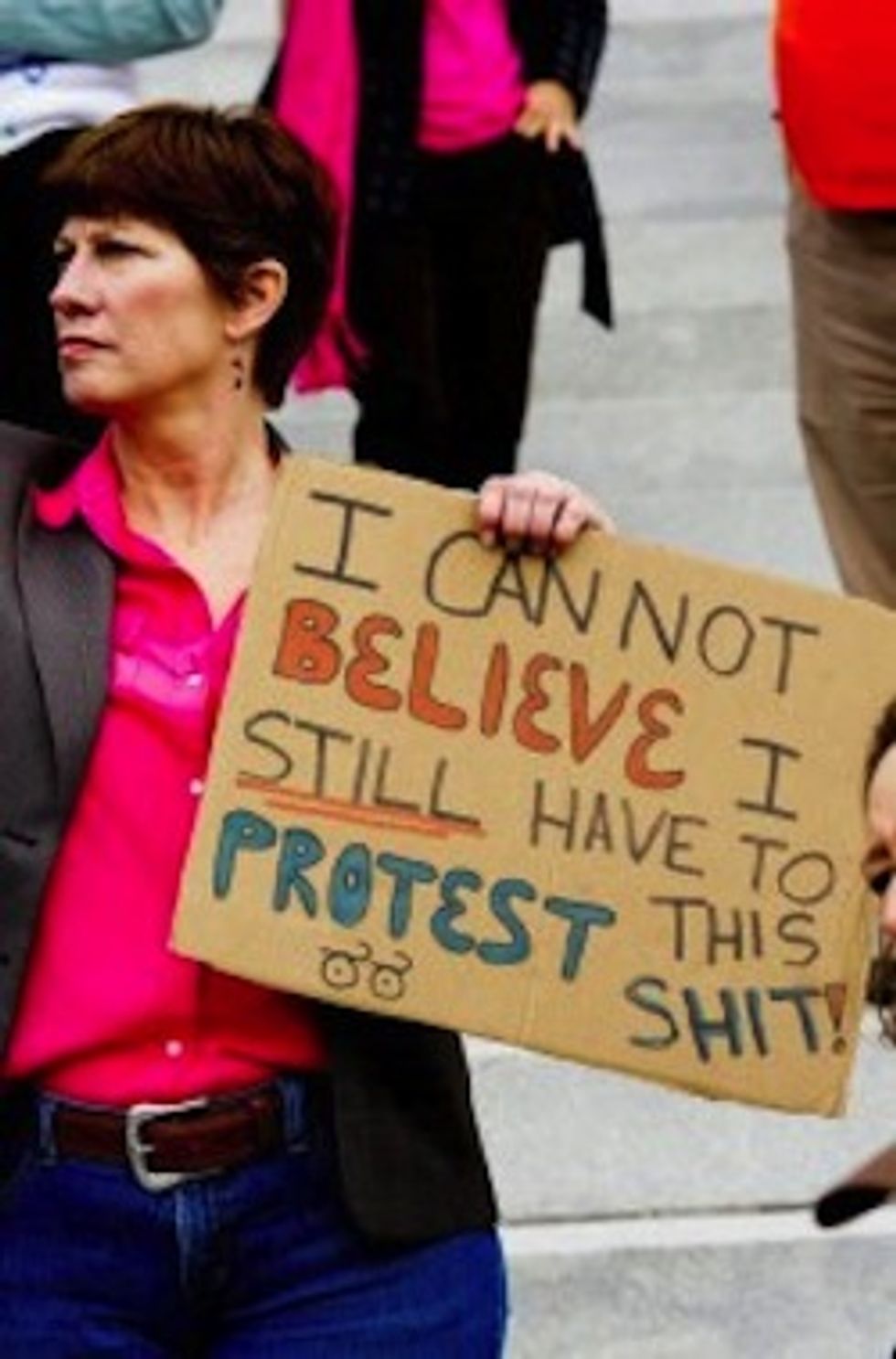 Forty-one years ago today, the Supreme Court made the bold declaration that what a woman does with her uterus is her own fucking business (before a fetus is viable, and then it gets kind of murky). And we Vagina-Americans have been fighting to remind the country that no, seriously, this is our legal right for reals, ever since.

Republicans, meanwhile, being Republicans, have been trying to insert asterisks into Roe ever since. Like Rep. Henry Hyde (R-Scumbag), inventor of the heinous Hyde Amendment, which says taxpayer dollars cannot be used to pay for a legal medical procedure. And there was the Partial Birth Abortion Ban (passed with the help of several Democratic acccomplices, AHEM), which banned a procedure that is not actually a procedure but a definition Congress invented that basically says a combination of procedures used to perform abortions is especially ewwww and icky and so that should be illegal because ewwww and icky. But of course this is for the ladies' own good because ladies are dumb and do not understand what abortion means and, as Justice Anthony Kennedy mansplained in upholding the Partial Birth Abortion Ban, even though "we find no reliable data," certainly women MUST regret their abortions, and they MUST sometimes be depressed and have low-self esteem about it, so it is better for them if they just don't get to have abortions. For their own good. And their self-esteem. Gee, thanks for your concern, Justice Kennedy. Please go fuck yourself with a wire hanger.

The current Congress has some cool new ideas this year about how to pretend Roe is not actually the law, like maybe rape victims seeking abortions should be audited by the IRS. So compassion!

And of course we've had state after state after state come up with all kinds of donkeyshit legislation (that's a technical term) to restrict abortion so that it's basically illegal. Like, you can only have an abortion if you have eleventeen appointments with your doctor first, and your doctor has to describe to you how if you don't KILL YOUR BABY, it might grow up to be blond and blue-eyed and be a star quarterback and maybe the next Jesus and/or Mozart so are you SURE you want to kill your baby, you whore? Go home and think about it for 24 hours, or even 72 hours, and then come back, hear the speech again, look at some pictures, and then MAYBE you can have that abortion if you still really want it. Whore.

Many of those laws have been overturned because of that whole Roe v. Wade thing that says abortion is legal so you can't actually make it illegal because it is legal, you dumbasses. But that does not stop them from trying again and again and again some more.

And in case it was unclear, Republicans have vowed this year to focus on hating abortion even more because maybe we don't know how much they hate it (we do, fellas, we really do), and they think that's a winning electoral strategy. (Ask not-Sen. Todd Akin and not-Sen. Richard Mourdock how that worked for them in 2012.)

Since the Supreme Court's decision in 1973, the great defenders of "life" (where "life" means unborn babies, but not people who are executed because that's totally not the same thing, and funny how "pro-lifers" are also super pro-death penalty and also pro-war, but hey, let's not bother to point out the hypocrisy because that would be mean), we've also seen thousands and thousands of terrorist attacks on abortion providers and their patients because nothing says "pro-life" like bombing a clinic or assassinating a doctor IN HIS CHURCH. (Now is a good time, because it's always a good time, to remind you that Cheryl Sullenger, the senior policy adviser for Operation Rescue, one of the nation's most prominent anti-choice organizations, served actual time in actual prison for trying to blow up an abortion clinic. You know, for life.)

As they do every year on this day, these lovely people who worship the fetus but hate the ladies what carry them will be doing their little March for "Life" on the National Mall in D.C., where they will shout lots of argle bargle about how women's reproductive rights are basically just like the Holocaust and demanding that the Supreme Court immediately impeach itself so that men do not have to regret their abortions.

Sigh. We are depressed (whatcha gonna do about that, Justice Kennedy?) that more than four decades later, we are still fighting this stupid war to remind the country that we are TOO allowed to make our own decisions about whether and when to pop some babies out of our bodies. We are even more depressed that we have less access and more restrictions now than we did in 1973. We are damned near suicidal that when we look in the mirror, we do not see PROPERTY OF THE STATE tattooed on our lady parts, but apparently it is there in invisible ink only men can read.

So we are going to go to the nearest abortion clinic -- which, in most parts of the country, is now several counties and many hundreds of miles away, since those bastards have been so effective at shutting down clinics -- and get ourselves some abortions while we still can, before the "pro-lifers" asterisk our rights right out of existence altogether.