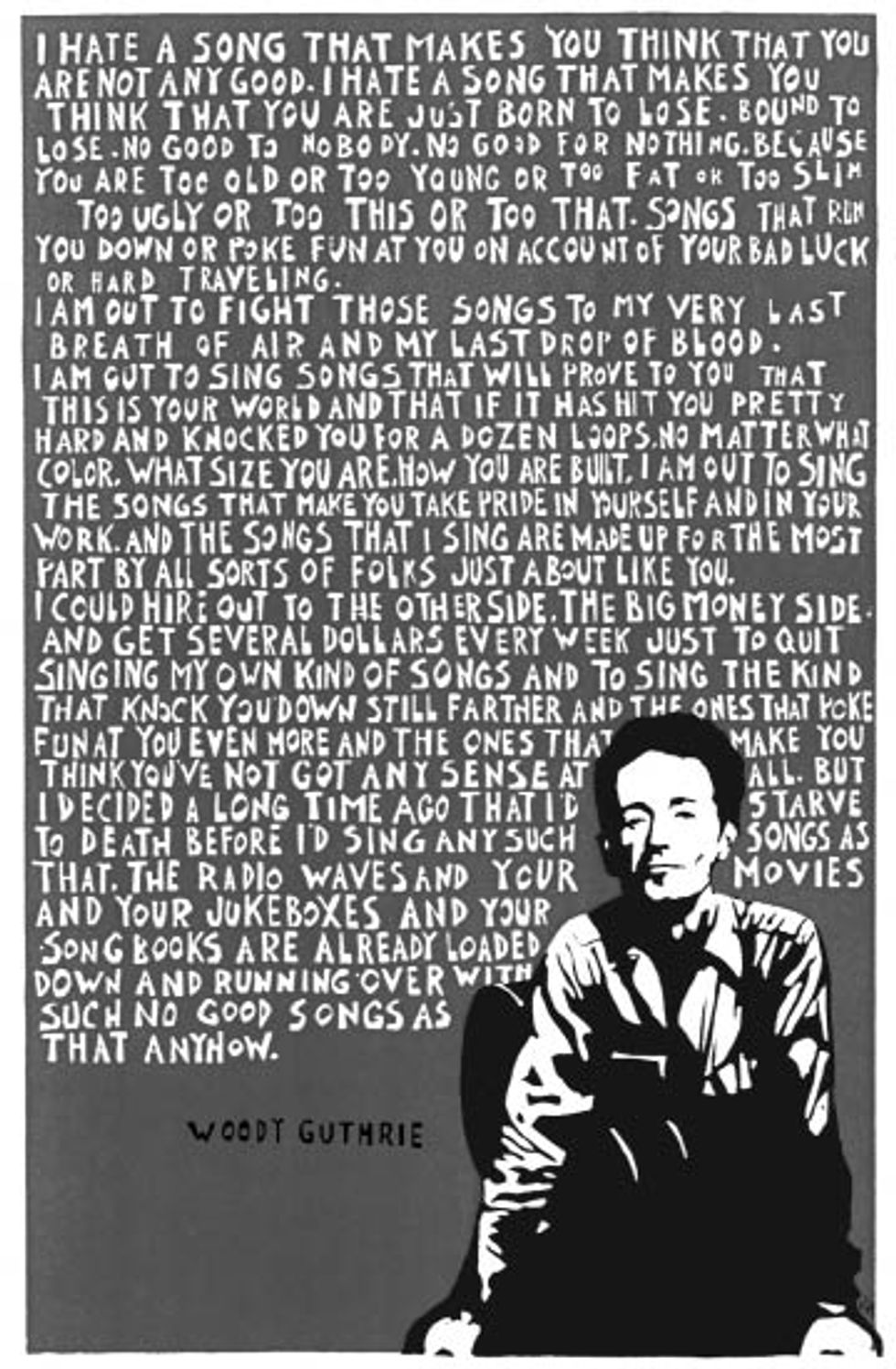 You may have noticed, a couple weeks ago, thatGoogle's "doodle" for Independence Day was a tribute to Woody Guthrie's "This Land is Your Land." Lord knows the Wingnutosphere noticed; where a sane person would stick to objective facts and condemn the doodle for its excessively busy, icepick-to-the-visual-cortex graphic design, Big Government's perpetually Red-'bating Ben Shapiro decided to go full Donald Sutherland at the end of Invasion of the Body Snatchers, pointing and shrieking at the doodle's "communist-oriented" theme and the allegedly America-hating sentiments of the song's original 1944 lyrics:

There was a big high wall there that tried to stop me;

But on the back side it didn't say nothing;

This land was made for you and me.

Guthrie had another variation of the stanza he liked to use:

As I went walking I saw a sign there

But on the other side it didn't say nothing,

That side was made for you and me.

Same difference. The original lyrics also had another stanza asking whether America was really that great:

In the squares of the city, In the shadow of a steeple;

By the relief office, I'd seen my people.

Is this land made for you and me?

Not exactly Founding Fathers ideology there. But Guthrie was no Founding Father. He was a Communist fellow-traveler who wrote a weekly column for the The Daily Worker.

Actually, these may be the most factual paragraphs Ben Shapiro has ever written; his only error is suggesting that any of that should frighten us.

Other rightblogs also noted, again correctly, that Guthrie wrote the song as a critique of "God Bless America," albeit with a pearl-clutching note of horror that anyone might not worship that fine anthem (As an aside, could we just quietly say that, eleven years on, it would maybe not be an insult to The Troops if we went back to singing "Take Me Out to the Ballgame" during the 7th inning stretch? Yes, we know, why do we Hate America?)

So on the occasion of the centenary of his birth, let us take a moment to celebrate the career of Mr. Woody Guthrie, proud socialist and proud American, a man who saw no contradiction between loving his country and saying it NEEDED TO GET ITS SHIT TOGETHER.

We will not attempt a full retrospective of Guthrie's career, because there are plenty of those out there already: Start with the official Woody Guthrie website. Then, for a good general piece, this Fresh Air story from the past week is awfully nice, as is this Democracy Now! show featuring singers Pete Seeger and Billy Bragg, as well as Guthrie biographer Will Kaufman. For a more thinky discussion of Guthrie's career as a lefty, Scott Borchert's 2011 review of Kaufman's Woody Guthrie, American Radical is a good read -- he even cites Gramsci and says "co-optation"! And so, some loose thoughts about Woody Guthrie and his Relevance for Modern American Society in Today's Modern American Society of Today:

All during the Recent Unpleasantness, we had these lines going through our head:

Yes, as through this world I've wandered, I've seen lots of funny men

Some will rob you with a six-gun, and some with a fountain pen

As through this world you travel, you'll meet some funny men

Some will rob you with a six-gun, and some with a fountain pen.

Add in some robo-signing and collateralized debt obligations, and you've got an anthem for Today.

Freedom, Social Justice, and Infrastructure: "The Biggest Thing That Man Has Ever Done," 1941:

Like any good midcentury socialist, Guthrie saw the enormous dams of the Bonneville Power Administration as an unadulterated good: a source of cheap, clean power, flood control, drought relief, and prosperity. For Guthrie himself, they also meant a one-month, $266.66 contract in May 1941 to write songs for "The Columbia," a film promoting the BPA (see Robert C. Carriker's nifty "Ten Dollars a Song: Woody Guthrie Sells His Talent to the Bonneville Power Administration"). Worries about ecological impacts, especially on salmon migration, had to wait until later decades; the songs Guthrie wrote in the Pacific Northwest are full of muscular nature-subjugatin' and can-do sleeve-rollin':

Uncle Sam took up the challenge in the year of 'thirty-three,

For the farmer and the factory and all of you and me,

He said, "Roll along, Columbia, you can ramble to the sea,

But river, while you're rambling, you can do some work for me."

Incidentally, production of "The Columbia" was interrupted by World War II and it was not released until 1949. In 1953, Dwight Eisenhower was so worried that Guthrie's communist-inspired river songs might have the power to promote sedition that he ordered all prints of the film to be destroyed. Happily, this did not happen, and the film is now in the public domain, which sounds suspiciously Red in itself. In 1987, the Washington Legislature adopted Guthrie's "Roll On, Columbia, Roll On" as the state's official folk song.

Guthrie was passionate about defeating Nazi Germany, and saw ending racism and corporate capitalism as part of the same fight. In a wartime letter to his second wife (excerpted in the Borchert article linked above), Guthrie attributes his anti-fascism to

“a personal hate so strong that it makes you want to kill in order to keep the people you love from being slaves…because if you really love anybody or anything or any principle or any science or belief, you will hate, hate, hate, and keep hating anybody or anything that tries to hurt, or kill or destroy that which you love. Unless love has got this hate, it’s not love at all, it’s a cave full of mysticism, and one of the most dangerous forms of cowardice”

There's no "With votes" in that statement. Unlike modern chickenhawks who cheer on wars from the sidelines, Guthrie put his guitar-slinging butt on a Merchant Marine ship, and surviving two torpedo attacks as well as a punch in the face from a crewmate who took exception to Guthrie shouting "God bless the Red Army!" -- guts, yes, a sense of diplomacy, no. Guthrie also had no patience for the notion that America would defeat fascism all by its red white and blue self; "What Are We Waiting On?" (1944) explicitly invokes an anti-fascist "union" of nations:

When I think of the men and the ships going down

While the Russians fight on across the dawn

There's London in ruins and Paris in chains

Good people, what are we waiting on?

Good people, what are we waiting on?

Yes, I thank the Soviets and the mighty Chinese vets

Allies the whole wide world around

To the battling British, thanks, you can have ten million Yanks

If it takes 'em to tear the fascists down, down, down

If it takes 'em to tear the fascists down

Guthrie’s extreme passion began to show in songs that glorified the killing of enemy soldiers and even the bombing of enemy cities -- a sort of glee that is off-putting from this distance, in full historical view of the sheer human wreckage of the Second World War. His songs captured the brutality of the war but in a way that was largely uncritical of the entire war-making enterprise.

Are you surprised at my tears, sir? Strong men also cry...

Finally, let's go back to "This Land Is Your Land," this time as performed by Pete Seeger and Bruce Springsteen at the Obama Inaugural concert, 2009. Note the inclusion of those lyrics that got pathetic fearmonger Ben Shapiro so exercised.

(Pete is pushing 90 here. God DAMN we are going to weep for a week when he goes...and maybe punch anyone in the nose -- with votes of course-- if they question his dedication to America)

So Happy Bastille Day, and Happy 100th, Woody Guthrie! We hope this little sampling will inspire you all to go destroy freedom help U.S. America get its shit together, or at least hum a good tune about doing that.