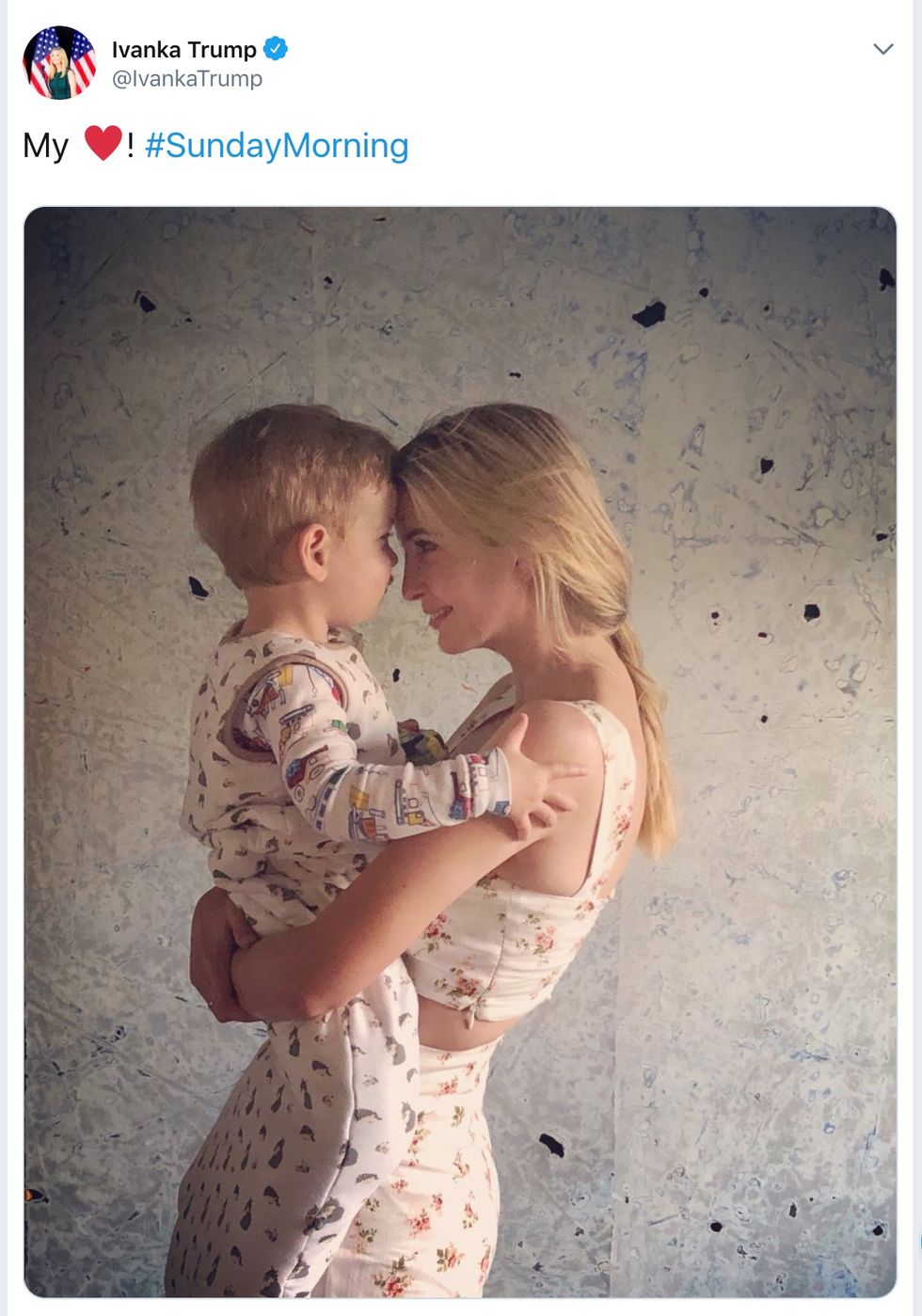 "Grandpa separates families at the border!"

On Sunday, Ivanka Trump spent the entire day being dragged for an oblivious tweet (at best it was oblivious; the alternative is she did that shit on purpose) of her and her child spending a lovely Sunday morning making kissyfaces while her father literally snatches babies from the arms of immigrant mothers at the border. People were not amused and let her know it many many times.

Not sure if Ivanka even noticed the outcry about border separations of parents from their children, and whether if she did she would care. (She wouldn't.) She doesn't like to be reminded of poor people, like the ones in her sweatshops. And since Ivanka's poverty wages to her workers in countries like Indonesia separate families because parents literally cannot afford to live with their children, it is simply a case of "like father, like daughter."

Oh hey I’m Ivanka, I still got my baby, hope nobody snatches yours XOXO https://t.co/XU7GIOH0pc

I found these stunning old photos of Ivanka Trump. pic.twitter.com/OJ0hLFkYuS

Pretty sure me and Evan owned her.

If you thought that was the end of things and that maybe Ivanka would go away and leave us alone, too bad for you. Now she wants to sell Chinese people a baby blanket and a coffin! Two things you never ever want to see in the same sentence. Ok, so, she’s not really trying to sell baby coffins, or maybe she is, but not exclusively baby coffins. Coffins come in all sizes, and what better business is there for a Trump than selling boxes to put dead bodies in? That’s right. It just fits.

This is the 13th trademark China has approved for her company, Ivanka Trump Marks LLC, in three months, and yes, it is suspect as hell. Many are wondering if this is related to Trump deciding to give a helping hand to Chinese smartphone maker ZTE (it is), or if it’s just regular ass corruption (it is). In the Trump world "corruption" and “business” mean the same exact thing. Ivanka can now sell all kinds of stuff to the Chinese that they probably don't need, and China can keep its relationship with Trump from turning out like Qatar. Pretty sure China doesn't want to have to pump half a billion dollars into Ivanka Trump's brand to get back in "good graces" with Trump.

But don't worry, everybody. Chinese officials say there is absolutely nothing to see here, this is all perfectly normal. And many experts agree, if by normal they mean "regular corruption" not "ZTE related corruption," sure. We are getting pretty used to Trump and Family using other nations' money like it's their own petty cash box at the office. Regardless, we are still interested in getting to the bottom of the sudden ease with which she obtains trademarks in China, and ethics experts are sounding the alarms over possible conflicts of interest. As usual. Apparently we are stuck with Ivanka Trump until we find a way to get her father to go the hell away, like Melania apparently did.

Don't forget to donate today, and together we will try to save America from an Ivanka presidency.