Ivanka Trump Would Thank You To Shut Your Stupid Face Hole About Her Gross Perv Daddy! 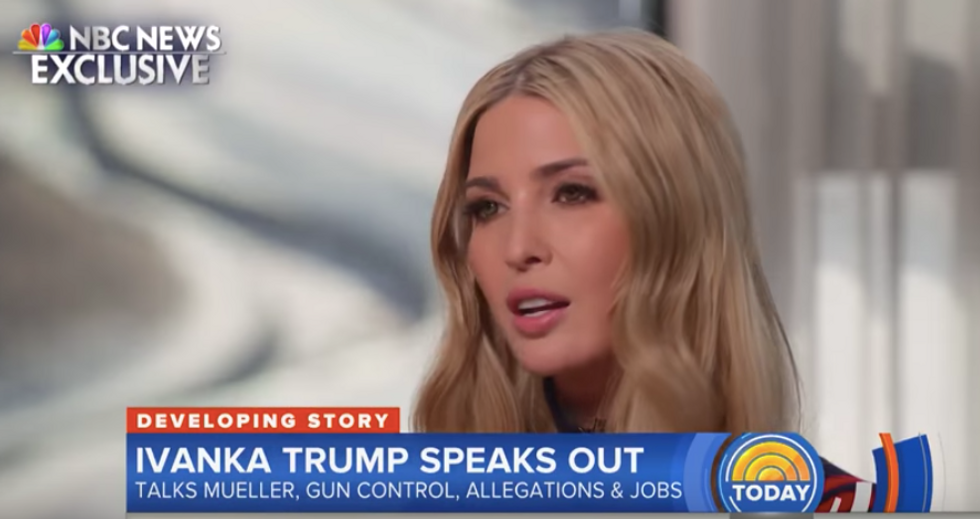 Princess Ivanka did not come down to the NBC studios to be sassed, Peter Alexander! She has graced you with the royal presence, and you will mind your manners, young man.

Ivanka Trump is just back from South Korea, where she and Sarah Huckabee Sanders used their powerful ovaries to cheer on America's Olympic athletes. A White House official told the Daily Mail, "Sarah's going as a female to help cheer on all of the female athletes and highlight the women's sports and success our female athletes have had at this year's Olympic games." Gimme an X! Gimme an X! Gimme a USA!

Wait 'til Gus hears that in addition to her trip to the Olympics on the US taxpayers' dime, Ivanka Trump sat down for a kibitz with South Korean President Moon Jae In on North Korean nuclear sanctions. CNN reports,

Trump delivered a personal message to President Moon from President Trump about today's North Korea related sanctions announcement at a small meeting at the Blue House. They also discussed the continued effort on the joint maximum pressure campaign against North Korea.

Ivanka Trump, who still has no permanent security clearance, was conducting nuclear diplomacy on behalf of the United States. Ivanka Trump, who licenses her name to shitty clothes and is the pretty face of her father's money-laundering condo business ALLEGEDLY. In a country where we have no ambassador because the White House nixed the competent guy who told them a "bloody nose strike" on North Korea was a ridiculous idea. Cool, cool.

Well, if Daddy says it, it must be true! Totally appropriate for the first daughter to brief a foreign head of state? TRUE. Guns for teachers? SURE. Not a pornstar-payin' pussygrabber? IT IS MY RIGHT TO BELIEVE!

“Do you believe your father’s [sexual misconduct] accusers?” -@PeterAlexander

“I think it’s a pretty inappropriate question to ask a daughter if she believes the accusers of her father when he’s affirmatively stated there’s no truth to it.” -@IvankaTrump pic.twitter.com/23AVPgcOdE