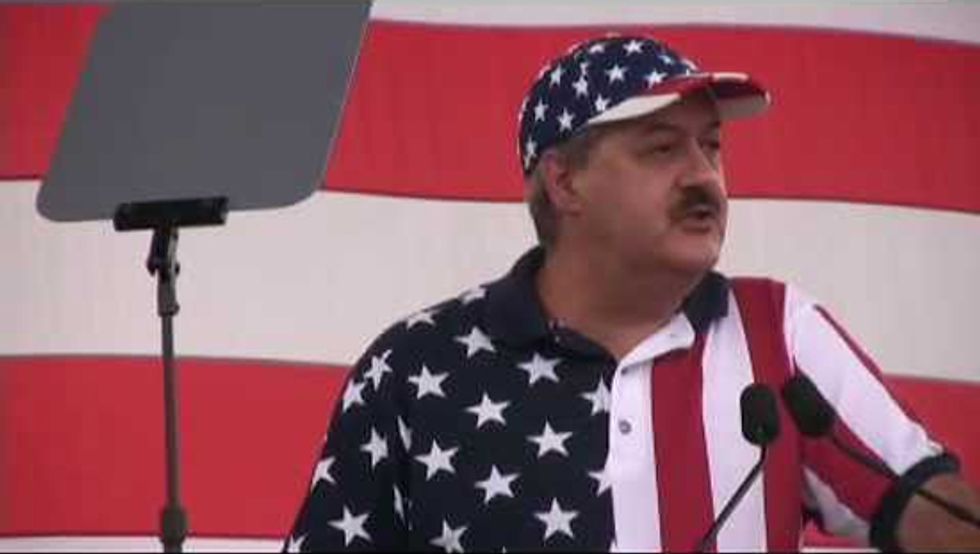 Since Yr Wonkette is heading to West Virginia to take away all their guns (shh! don't tell!) or at least hold a great big Drinky Thing in Morgantown, WV, tonight (5:30-7:30 p.m. at the Black Bear downtown, 132 Pleasant St., see you there!), we turn our eyes this week to the Mountain State, where all that excellent labor activism by noisy teachers has reminded folks that the state has a long history of union activism and even by-God progressivism. Not that you'd necessarily know it from the current crop of Republicans running the place, but those teachers reminded people that, oh, hey, unions matter, and maybe all those tax cuts didn't bring magical prosperity. Very interesting things could grow out of that strike.

That said, West Virginia for the moment remains a very red state, where Donald Trump still has a 61 percent approval rating, and incumbent Democrat Joe Manchin III isn't likely to start wearing a pink pussy hat to reach out to the Resistance. Ballotpedia rates the state a toss-up for the 2018 Senate race, and it's on CNN's list of the 10 Senate seats most likely to flip this year. For all we like to put Joe Manchin, "Democrat," in quotes, keeping his paper-shooting ass in his Senate seat is nonetheless important if Dems want to take control of the upper house this year. If we were in West Virginia, would we enthusiastically vote for him? Probably not, but on the issues that matter most -- health care, tax cuts, even universal background checks for firearms purposes -- Manchin has been a reliable vote in the "D" column. Yes, our inner youthful idealist is pissed at us, too, but this is your corporate whore centrist pragmatist neoliberal sellout Wonkette saying Manchin sucks but he'd still be better than any of the Republicans running for the chance to run against him.

Which brings us to the dickweasels in the Republican field, starting with one of the most unequivocally evil people ever to seek elected office, Don Blankenship, the CEO of Massey Energy when the Upper Big Branch Mine blew up in 2010, killing 29 miners. Blankenship has long maintained that, despite multiple investigations that found the explosion was due to coal dust allowed to build up because of lax safety, the explosion was really due to a freak surge of natural gas that nobody could have prevented. Or detected, for that matter, since there's no evidence at all to back his version. Massey had an incredibly bad record on safety, and the Mine Safety and Health Administration (MSHA) report determined the explosion was completely preventable but for the "unlawful policies and practices" engaged in by Massey. The company was issued 359 citations after the blast.

Blankenship was convicted in 2015 of conspiring to violate mine safety regulations, for which he served a year in minimum-security prison. Yes, one year for the indifference to safety that killed 29 miners. He could have been put away for far longer -- 30 years -- if he'd been found guilty of securities fraud and lying to federal investigators, but the jury declined to do so. Blankenship declared himself a political prisoner, sent to Club Fed by Barack Obama simply for being a successful businessman (who killed 29 miners).

Blankenship's campaign for Senate is just one more stop on his long crusade to prove every mine inspector in the federal government was wrong, and they were all out to get him and steal his strawberries. Before he joined Dinesh D'Souza on the list of Guys Who Call Themselves Obama's Political Prisoners, he made a shitty "documentary" about his innocence and government perfidy, which he promoted in a jaw-dropping interview with Chris Hayes in 2014. It's truly a masterpiece of the amoral weasel being interviewed by a good journalist genre.

Blankenship's dogged insistence on deflecting every question is matched only by Hayes's refusal to buy it; Hayes just interrupts Blankenship in the middle of his canned answers and moves on to another question. It's good stuff -- unlike any given cell from Blankenship's body.

Blankenship is running against two more conventional Republicans -- rightwing, of course, but less likely to be called bugfuck crazy -- US Rep. Evan Jenkins and West Virginia Attorney General Patrick Morrisey. The two had mostly been campaigning against each other until fairly recently, but then Blankenship came along and poured over $1.1 million into TV ads, and now both Jenkins and Morrisey are looking at internal polling that shows Blankenship just a point or two behind. And Blankenship has plenty more of his own money to spend, with little more than a month to go before the May primary.

Blankenship is selling himself as an absolute ally of Donald Trump, and his ads accuse both the other Republicans of being insufficiently perfect at being complete rightwingers. Morrisey's wife works for a lobbying firm that took money from Planned Parenthood, so obviously he's not just fibbing about being "Pro Life," he's probably performed some abortions himself. It's a laughable sledgehammer of an ad, so of course it's effective:

And Jenkins is even worse, if that's possible, because he doesn't even agree with Donald Trump that climate change is a hoax. Yes, the ad really, really says that:

Other ads are aimed at settling grudges, accusing Barack Obama and Hillary Clinton of conspiring with Joe Manchin to send Blankenship to prison, because heavens, who ever heard of a CEO going to prison for anything in our great republic?

As a result of Blankenship's apparent progress from fringe candidate to maybe-contender, there's been a whole bunch of articles about his sudden seeming legitimacy -- if not in objective terms, because he's still a conspiracy-believing loon then in terms of his potential to be another Roy Moore, only one who has a chance to win because this time his evil past only involves killing miners and consistently hating unions, not being credibly accused of sexually assaulting teen girls. He's just rightwing enough, and enough voters may buy his insistence that he's the truest Trump analog in the race (not even we would dispute that) that there's some non-zero chance that Blankenship could win the nomination, and even defeat Manchin, who's on Blankenship's enemies list because Manchin said the Upper Big Branch explosion left Blankenship with "blood on his hands."

So far, the national Republican party has stayed out of the primary, since any move to help Morrisey or Jenkins could be played up by Blankenship as evidence that the Powers That Be are out to get him and rig the election -- the Donald Trump resentment playbook redux. Mitch McConnell and Blankenship already can't stand each other, and McConnell has said that he doesn't want Blankenship to win the nomination. Looks like the "mainstream" Republicans went and created another monster they can't quite control. It's almost as if they were stuck between a collapsed mine entrance and a dangerously combustible gasbag.

We should also note that Joe Manchin faces his own primary challenge from Paula Jean Swearingen, an environmental and social activist who has campaigned against mountaintop removal mining, and whose capsule bio notes that her grandfather and several uncles have suffered from black lung disease. It also includes this startling reminder that Big Coal didn't only bring jobs to West Virginia communities:

The girl who believed she was a redhead found out her naturally brown hair had been stained all her young life by the orange water in which she showered [...] Coming back to coal country, Paula Jean saw entire communities left in the dust when a mine shut down, small businesses drying up, miners and their children struggling with diseases brought on by the industry, and a whole generation struggling to find reliable, safe jobs that would put enough food on the table.

Swearingen's platform is unabashedly lefty. We like her! But: painful numerical realism of the sort that makes people hate that science fiction classic "The Cold Equations"? Going into 2018, Joe Manchin had $4.7 million cash on hand, and Swearingen has $57,000. Don't stow away on the spaceship this year, Ms. Swearingen.

Yr Wonkette is supported by reader donations. Please click here to help us bring you all the Senate races, one week at a time!