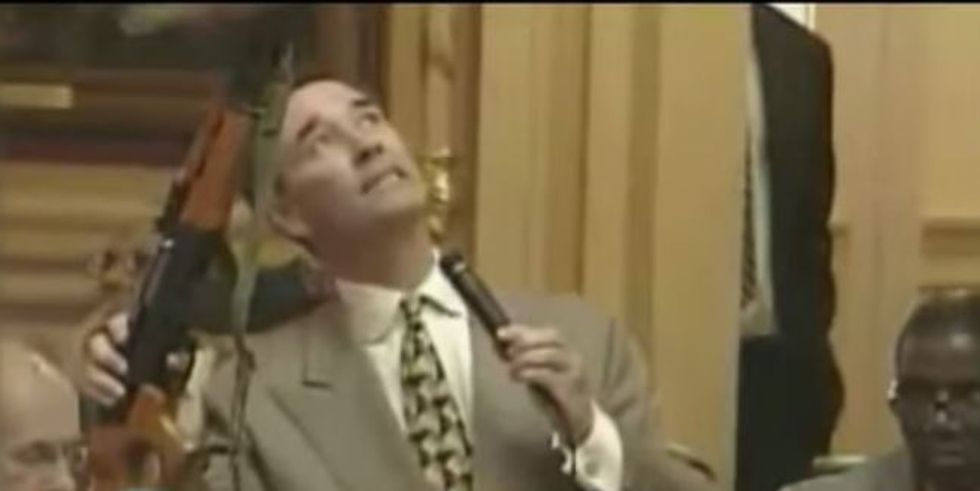 Joe Morrissey, everyone's favorite minor-corrupting member of the Virginia House of Delegates, went on trial for his political life on Tuesday, only weeks after taking a plea to avoid an actual trial for child pornography and resigning from office. Pushed off the Democrats' ballot line in a controversial private caucus, Morrissey ran in this week's special election for his tainted seat as an independent, despite the unique challenge of being in jail most of the time over those unpleasant accusations regarding his underage receptionist. Not even allowed to pester people for votes outside grocery stores during his daytime release from the slammer, Morrissey campaigned largely from the confines of his law office and clothed himself in concern for the humble voters. Just let them decide, he said, and they'll keep him as their man in Richmond.

[contextly_sidebar id="gRlZa0oxSjXEc3vLHbqRpJ3eap2lSJR0"]Yr Wonkette recognized Morrissey's selfless commitment to public service in his time of incarceration with a second-place nod in the state division of the 2014 Legislative Shitmuffin of the Year Award. We now report with some astonishment the possibility of a Wonkette Bump that does not involve the babby growing in our illustrious Editrix's belly, because Virginia's 74th House District has re-elected incumbent delegate (but probably not a Democrat anymore) Joseph Morrissey. He made his resignation effective on the day of the election, so he didn't even have to pack up his office, and when the Virginia legislative session starts Wednesday, he will be there to awkwardly scan the cafeteria for a lunch table to join, hoping they wrap up House business before he has to be back to the jail at the end of the day.

Virginia Democrats might have to suffer the sight of Joe Morrissey in the House of Delegates for another couple of years, but at least they can't be held responsible for what he does from this point on. Those political elites did everything they could to take Joe Morrissey down, even sending their jackbooted thugs to toss his office the day before the election, but Virginia's pluckiest jailbird will never stop fighting for his constituents in the halls of power except when it's bedtime and he has to go back to his cell.

The legislating-from-jail experiment started off a little shaky when Joe came home five minutes late on election night and the sheriff told him to be in half an hour early on Wednesday as punishment. He might miss some important stuff on the first day of the legislative session, but who wouldn't rush back to hang out with chums like these?

Other inmates could be heard chanting “Vote for Joe” on the floor where Morrissey’s jail cell is located.

Molotov, Del. Morrissey! You've done your bare-knuckle boxing ancestors proud. Mind that curfew, now. Already reeling as they are from the loss of Bob McDonnell, Virginia's criminals, more than ever, need a strong voice in state government.