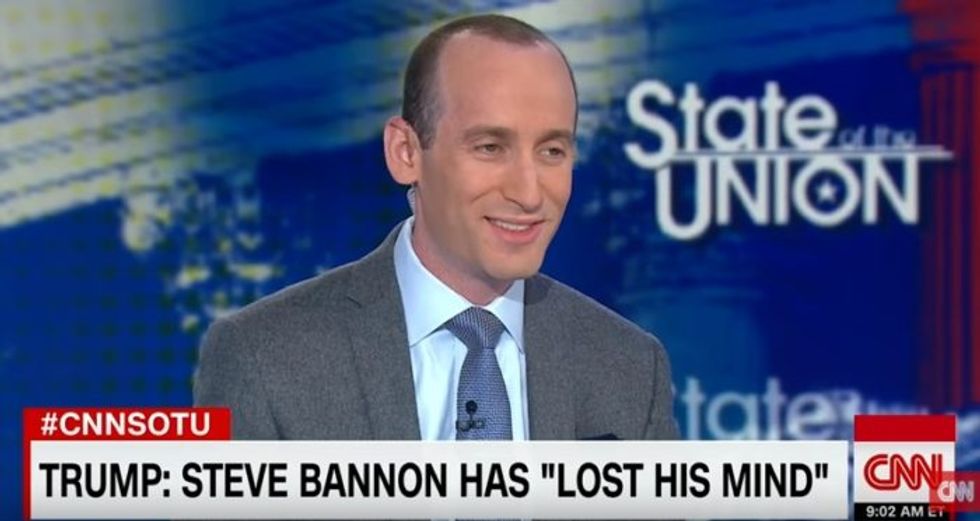 White House adviser and presidential lickspittle Stephen Miller bravely faced down Jake Tapper on CNN's "State of the Union" Sunday, refusing to answer Tapper's "questions" and instead informing America that Donald Trump is the smartest, most intelligentest, and also smartest president of modern times. The interview was ostensibly a chance for Miller to respond to questions about Michael Wolff's book Firing The Furries (that link gives yr Wonkette a cut), and while Miller addressed the book, he was far more interested in his own glorious duckspeak than in taking questions. In other words, it was Stephen Miller on a TV show.

After Tapper cut the ranterview short, Miller refused to leave the studio, according to Business Insider. He was asked several times to please go now, and refused, so "ultimately security was called and he was escorted out," according to "two sources close to the situation." WE WANT VIDEO.

The interview itself took a full two minutes before launching off to crazyland. In response to a question about whether Don Jr. would have met with Russians and not taken the opportunity to introduce his distinguished guests to dad, Miller started off with theatrical sorrow at Steve Bannon's uninformed speculation:

Steve Bannon's eloquence in that description notwithstanding, it's tragic and unfortunate that Steve would make these grotesque comments.

It was all very sad, and it makes everyone at the White House very sad. The book, Miller sighed, "is best understood as a work of very poorly written fiction." Then Miller got rolling, adding that Michael Wolff is a "garbage author of a garbage book."

Still speaking in sort of measured tones, Miller offered a stirring portrait of how very, very smart and eloquent Trump was on the campaign plane, telling a story about how quick Trump's brain was on its feet:

I saw a man who was a political genius, somebody who -- we would be going down, landing, in descent there would be a breaking news development. And in 20 minutes, he would dictate 10 paragraphs of new material to address that event, and then deliver flawlessly before an audience of ten thousand people.

Rather than chasing that bit of fascinating anecdotage -- we'd certainly like proof of this insane claim that Donald Trump has ever spoken in "paragraphs" -- Tapper went back to his fake news question about the Trump Tower meeting, and that flipped a switch for Miller. If the news guy was going to insist on repeating a question, well, that was simply more than the angermuppet was willing to stand for! Not only are all the allegations in the book a "pile of trash," CNN is a pile of trash too:

Your network's been going 24/7 with all the salacious coverage, and I know that it brings a lot of you guys a lot of joy to trying to stick the knife in.

From there, Miller was into full Attack Poodle mode, insisting that the book was full of versions of events that he'd been present for that he almost didn't recognize because they were so distorted. Tapper actually blew a chance when Miller said that, rising to the bait and insisting CNN had no interest in knifing anyone instead of simply asking Miller for an example of some specific event the book got wrong. Dammit, Jake, do some goddamn journalism instead of getting defensive.

Miller also went off on Bannon, who's just some guy who showed up around Trump for a little while, but never really mattered. You know who really ran the Trump campaign brilliantly? Donald Trump, the political genius. Did you hear that, boss? You're a political genius! After a bit more Trumpfluffing, Tapper interjected, "I’m sure he’s watching and he’s happy that you said that," which prompted Miller to accuse Tapper of being "condescending." No, that wasn't condescending, it was snide, and completely accurate.

Tapper at least tried to get in a question about Bannon's very definite involvement in setting a number of policies. How could Trump now claim that Bannon had "nothing to do with" his presidency? Sorry, Mister Cable News Bad Guy, no answers for you. Bannon's role has been exaggerated by everyone, he's an unperson, and besides, CNN never gives Donald Trump credit for how he's connected with "the kinds of people whose life concerns don't get a lot of attention on CNN," like all the decent people "getting slaughtered in sanctuary cities" by those criminal illegal aliens.

And did he mention that Trump's a genius? You bet he did.

Miller called Tapper "hysterical" and "condescending" a few more times, insisted that Donald Trump's tweets are nothing but unadorned truth and that they "tap into something magical that's happening in the hearts of this country," at which point we hoped he'd suddenly turn into a sparkly unicorn princess. Instead, Miller went on about how terrible CNN is, and what a genius Trump is, and Tapper had had enough:

You're not answering the questions [...] I get it. There's one viewer that you care about right now. And you’re being obsequious, you’re being a factotum in order to please him. And I think I've wasted enough of my viewers' time. Thank you, Stephen.

Or maybe Miller was being more of an alternative factotum. His boss sure was pleased with his performance, though:

Yr Wonkette is supported by reader donations. Please click here to help us watch Stephen Miller so you won't have to.