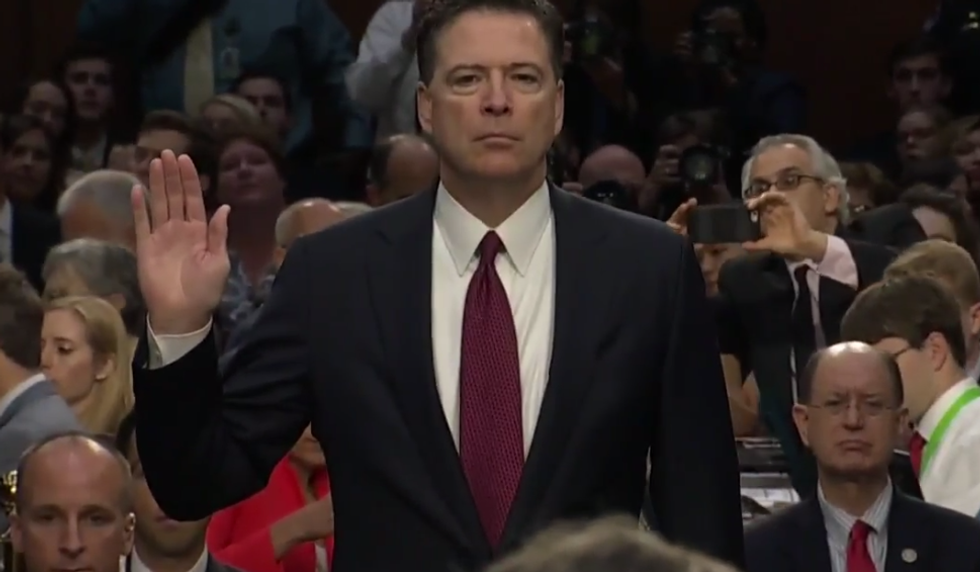 Good morning, did you see the RNC's AMAZING NEW LYIN' COMEY WEBSITE, the one that will murder James Comey's book in its crib? You should check it out, because it is an achievement in website-making!

Comey's book comes out Tuesday, but look who's already awake and having a tantrum in his own crib:

Oh goodness gracious! Somebody send a haz-mat team to the Executive Time room, because SOMEBODY GOTS A FULL DIAPER!

(Also, how funny is that there are a full 16 minutes between those two tweets? That, gentle readers, is how slow-brained your president is.)

(Also too, should we note how funny it is that Trump is calling Comey a LEAKER and a LIAR, considering how he's in the process of pardoning Scooter Libby, who LEAKED the name of an undercover CIA agent and then LIED about it to the FBI, or would that just be too obvious? Oh well, fuck it.)

Ashley Feinberg notes that this is likely to continue, as President Do-Nothing's plan for this TGIF is to do ... nothing!

Trump is raging at Comey because, while Comey's book may not be out yet, it has most certainly leaked into the hands of journalists, who are spilling all its embarrassing secrets.

Let's look at a few of our favorite excerpts!

TELL MELANIA I AM NOT INTO PEE STUFF, JAMES COMEY! TELL HER!

“He brought up what he called the ‘golden showers thing’ . . . adding that it bothered him if there was ‘even a 1 percent chance’ his wife, Melania, thought it was true,” Comey writes in “A Higher Loyalty.”

“He just rolled on, unprompted, explaining why it couldn’t possibly be true, ending by saying he was thinking of asking me to investigate the allegation to prove it was a lie. I said it was up to him.”

This happened at Comey's private dinner with Trump on January 27, 2017, one of the many times Trump tried to grab Comey by the pussy (we mean obstruct justice) but he couldn't get there. Note that Trump is pretty sure Melania Trump is pretty dang sure there is at least a "1 percent chance" Trump's funny little orange dingle-penis might get its jollies watching Russian pee hookers do the traditional Russian pee hooker dance on a bed the Obamas once slept in. What a trust-filled marriage they must have!

But Comey writes that Trump was just asking him about this constantly, like in a phone call on January 11, before Trump was inaugurated, when he said a pee party was UNPOSSIBLE because he didn't even sleep over in the Moscow Ritz-Carlton and besides, he is a germaphobe, so he cannot be that close to SO MUCH PEE. Comey:

“I decided not to tell him that the activity alleged did not seem to require either an overnight stay or even being in proximity to the participants,” Comey writes. “In fact, though I didn’t know for sure, I imagined the presidential suite of the Ritz-Carlton in Moscow was large enough for a germaphobe to be at a safe distance from the activity.”

March 30, 2017, another time Trump was trying to use Comey to obstruct justice:

“Can you imagine me, hookers?” Comey says Trump told him before adding “he has a beautiful wife and the whole thing has been very painful to her.”

CAN WE? CAN WE IMAGINE? Yes, Melania is very beautiful, and also we bet she really isn't a fan of thinking it's quite plausible her husband has Russian urinary adventures all the time.

January 6, 2017, when Comey and the intelligence chiefs briefed Trump at Gold Dipshit Tower in Manhattan:

According to Comey’s account in a new memoir, Trump “strongly denied the allegations, asking — rhetorically, I assumed — whether he seemed like a guy who needed the service of prostitutes. He then began discussing cases where women had accused him of sexual assault, a subject I had not raised. He mentioned a number of women, and seemed to have memorized their allegations.”

Huh, that is weird! It's almost like he remembers their allegations as if he had been there, doing "allegations" to the women!

Trump may be obsessed with pee, but he's also a liar without a soul!

In his memoir, Comey paints a devastating portrait of a president who built “a cocoon of alternative reality that he was busily wrapping around all of us.” Comey describes Trump as a congenital liar and unethical leader, devoid of human emotion and driven by personal ego. [...]

“[Liars] lose the ability to distinguish between what’s true and what’s not,” Comey writes. “They surround themselves with other liars. . . . Perks and access are given to those willing to lie and tolerate lies. This creates a culture, which becomes an entire way of life.”

Funny how Trump didn't seem to care that a hostile nation had attacked our election!

Comey writes more about the big pre-inauguration intel briefing at Trump Tower and says it was remarkable to him that, upon learning that Russia had successfully interfered with the election, all Trump seemed to care about was verifying that he won because DONALD TRUMP IS AWESOME and not because RUSSIA STOLE HIM THE ELECTION:

Trump asked only one question, Comey writes: “You found there was no impact on the result, right?”

James R. Clapper Jr., then the director of national intelligence, replied that the intelligence community did no such analysis.

Comey recalls being struck that neither Trump nor his advisers asked about the future Russian threat, nor how the United States might prepare to meet it. Rather, he writes, they focused on “how they could spin what we’d just told them.”

And then, Comey writes, Reince Priebus and Sean Spicer and Trump started gossiping about how they could tell everybody Russia DID NOT change the result, and James Clapper was constantly like "I didn't say that, shitheads!" but they just ignored him.

In his upcoming interview with ABC News, Comey adds:

“No one, to my recollection, asked, ‘So what’s coming next from the Russians? How might we stop it? What’s the future look like?'”

It's almost as if our nation is being run by people who don't actually give a shit about our nation.

Here are some other #ComeyBurns on Trump from the book!

There are also parts where Comey defends how he handled the Hillary Clinton email thing 11 DAYS BEFORE THE ELECTION.

WHATEVER, we're not even interested in reading this part. We still firmly believe Comey fucked that whole thing THE FUCK up and probably cost Hillary the election, but also believe that -- as he writes in the book Senator Chuck Schumer told him after the election -- he was in an "impossible position," mostly because pro-Trump rogue elements in the New York FBI office were threatening to fuck him, by leaking salacious bullshit about the "new Hillary investigation." But anyway, still, fuck James Comey for all that.

Comey says Loretta Lynch privately told him he did the right thing, though, to which we reply OH GO ON A DATE WITH BILL CLINTON ON THE TARMAC AT THE PHOENIX AIRPORT, LORETTA. (Not that we think there was anything wrong with that, aside from "bad optics.")

We weren't sure if we were going to read this book, but now we think we are. (Or at least we'll SAY we are, and then forget.) From what we can tell, Comey is just absolutely seething with dripping contempt for Trump, which means we have something in common. Also we like how he #BURNS Trump every chance he gets, for no other reason besides meanness. Perhaps he would like to try out writing for Wonkette sometime!

If you would like to read another Comey thing, there is a book review in the New York Times. We didn't read it, because fuck that, but maybe you'll like it.