James Comey Wouldn't Want To Hurt Russia's Feelings This Close To An Election! No, For Real 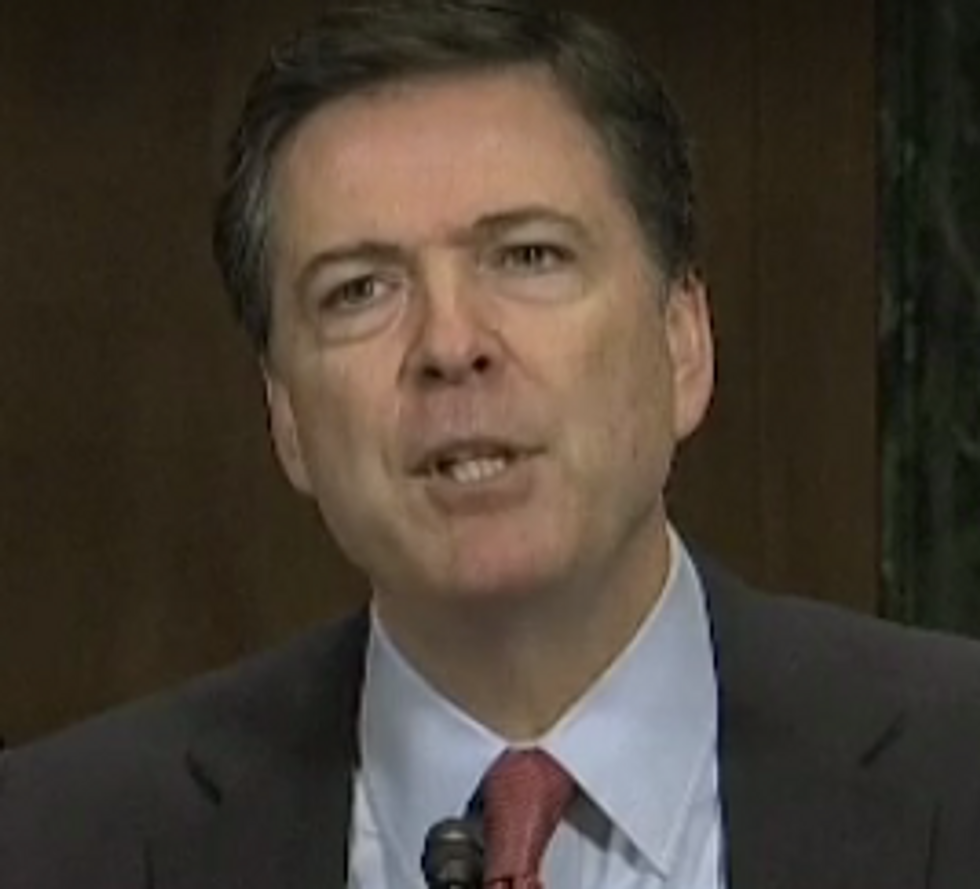 Not in the tank for Russia, he promises!

FBI Director James Comey has said he had a SWORN DUTY to keep dingleberry congressmen like Jason Chaffetz, and thus the American people, informed of any striking new developments in the Hillary Clinton email investigation, which is why he was MORALLY OBLIGATED to pen a letter to Congress on Friday that said, "Beats me! Anyway, Hillary emails." And he's been lambasted ever since, by Democrats, sane Republicans, and pretty much everybody else, for violating decades of Justice Department standards and practices of avoiding even the appearance of trying to meddle with an election. Hell, even Trump-supporting Fox News judge Jeanine Pirro was like "Um, not so much!"

[wonkbar]<a href="http://wonkette.com/608106/hot-take-maybe-james-comey-is-stupid-and-craven-and-terrible-and-the-worst"></a>[/wonkbar]But according to a SCOOP! from CNBC reporter Eamon Javers, there was one time very recently when Comey had standards! It seems he was super concerned about the United States announcing publicly that Russia was hacking and trying to meddle with our election, because it would be simply uncouth to say such a thing so close to the election!

FBI Director James Comey argued privately that it was too close to Election Day for the United States government to name Russia as meddling in the U.S. election and ultimately ensured that the FBI's name was not on the document that the U.S. government put out, a former FBI official tells CNBC.

The official said some government insiders are perplexed as to why Comey would have election timing concerns with the Russian disclosure but not with the Huma Abedin email discovery disclosure he made Friday.

OK, know what? Fuck this guy ten ways from Sunday and right up to next Tuesday, which happens to be the day of our U.S. American election.

As we all know, Russia was indeed named as the perpetrator, and as CNBC notes, that statement was signed by the Department Of Homeland Security and the Office of the Director of National Intelligence, because we guess they're not craven pussies like James Comey.

[wonkbar]<a href="http://wonkette.com/608114/harry-reid-will-cut-a-bitch-james-comey-james-comey-is-the-bitch-whom-he-will-cut"></a>[/wonkbar]Harry Reid's mean letter to Comey suggested that the FBI director doesn't think it's pertinent to share information the bureau is sitting on, about collusion between the Russian government and the Trump campaign. We think that's a way YOOGER deal than "Somebody Hillary Clinton knows might have emailed a recipe and a LOLcat to somebody," but that's just us. But if it was unverified information, part of an unfinished investigation about Russia giving Trump one million reach-arounds, it would indeed not be appropriate to share it!

But now we learn that, IN GENERAL, Comey didn't want to share information about Russia, a nation that's arguably one of the greatest threats to the free world and no friend to the United States, actually literally fucking with the machinations of our democracy? Theoretically, that would be information that has literally nothing to do with either candidate, but we're pretty sure we know which candidate Russia is helping here. It would seem to be the same candidate James Comey is helping, ALLEGEDLY AND OBVIOUSLY.

Put another way: does RUSSIA have standing for the United States to avoid maligning it too close to our election? Is RUSSIA running for president? (Rhetorical question, forget we asked.)

The official said FBI investigators can get a "preliminary read" of the newly discovered emails within a couple of days and come to an initial conclusion about whether there is classified material in the files. "The questions is whether they will decide to share that read or not," the official said. "Normally in the FBI we would not, but we're not in normal land anymore."

PREDICTION: If there is a #smokinggun, we will hear about it the second Jason Chaffetz and Donald Trump and the former Russia Today simultaneously upchuck it into our faces, because James Comey sent them a group text. If there is NOT, shhhhhhhhhhhh. Wouldn't want to "mislead" the American people by suggesting Hillary Clinton is not literally Satan incarnate.