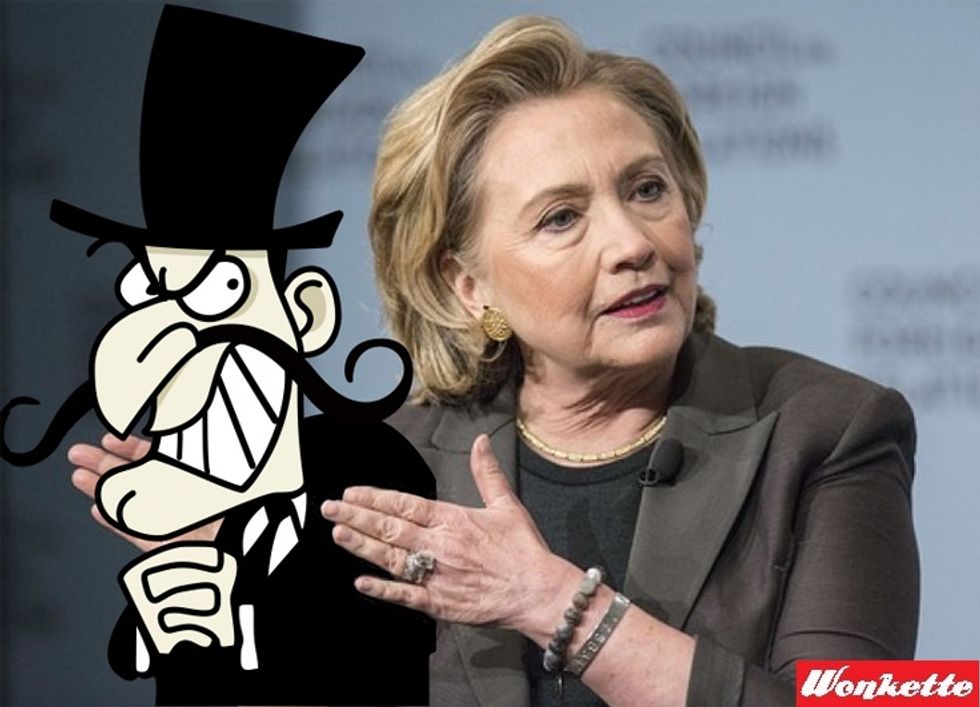 The Iceback infiltration is even worse than we feared!

Following last week's stunning news that Clinton campaign staffers are eager to register voters who are leaning toward Hillary, legendary undercover sting-thing James O'Keefe warned that he had still more evidence of shocking malfeasance in the Hillary Clinton campaign. And Tuesday, O'Keefe revealed the horrifying extent of foreign influence on the Clinton campaign, with a video of a woman who admitted she's a Canadian citizen being turned away by a staffer who wouldn't let her buy a T-shirt, explaining to the poutine-licker that American campaign swag can only be bought by Americans. BUT THEN, captured on video for all to see, when an O'Keefe operative standing in line behind the Canadian offered to buy the shirt, the campaign let the transaction go through, completely making a mockery of American campaign finance law and allowing a foreigner -- who could have been an ISIS terrorist for all we know -- make off with a T-shirt what is meant only for 100 percent Americans. Truly a sad sign of the depths to which our politics have descended.

So here is the huge GOTCHA for which O'Keefe's "Project Veritas" actually reserved a room at the National Press Club to announce his big reveal. We hope you are ready for this incredible documentation of criminal activity on a grand scale, as captured at Hillary's announcement rally in June:

And there's the crime, right there, at the 2-minute mark: Canadian lady tries to buy a T-shirt, top Hillary staffer Molly Barker says, no, sorry, can't take your money, because Canadian, but thanks. And then the Project Veritas lady with the hidden camera suggests, "She traveled all the way from Canada to support Hillary. You could give her ... she's paying cash." Clinton staffer says, "It's not my rule, I'm very sorry."

Cut away to a table displaying a Hillary brochure, a printout headed "FEDERAL ELECTION CAMPAIGN LAWS" (actual contents: ecchi manga printed out on a dildo boat), and a particularly sinister looking Canadian flag. O'Keefe intones: "The law is very clear. Foreign nationals cannot contribute to presidential campaigns. But it didn't take long for these campaign staffers to think they had found a way to skirt the law, and take the Canadian's money!" The scene shifts back to the swag tent, as the dramatic tension builds. The Canadian -- who Project Veritas swears they just happened to bump into in line, as one does with the people of that nation -- asks if she could give the money to the nice Project Veritas lady, so an American could make the donation and then give her the shirt. TRAP SPRUNG!

The Project Veritas "journalist" asks, "Canadians can't buy them, but Americans can buy it for them?" Barker replies, "Not technically. You would just be making the donation." O'Keefe, in voiceover, explains the crime that has just gone down: "Not technically means not legally." And remember, this all happened because by pure happenstance, one of O'Keefe's camera drones happened to stand next to an unidentified Canadian who happened to suggest a way the two of them could skirt election laws.

"The Canadian woman wanted to support Hillary's campaign, and Molly Barker broke the law by allowing our journalist to become the middleman."

Such serious fraud! Oh, and also, by making the donation for a foreigner, the Project Veritas lady was probably also breaking the election law, but it was for a good cause -- showing that Hillary is a lawbreaking lawbreaker -- so that's OK.

Or maybe no laws were broken at all? As the LA Times notes, you might just as well say that the Canadian didn't give any money to the Clinton campaign; instead, she gave an American $75 to cover the cost of a shirt the American had bought.

The press assembled for the Great Big Announcement was a bit underwhelmed. The Daily Beast's Olivia Nuzzi asked, "Is this a joke?" Nuzzi notes that O'Keefe's volunteer donated the cash to the Clinton campaign under a false name, which is a bit on the illegal side, too. Or maybe that's just more proof of Clinton's criminality, not demanding ID from cash contributors buying shirts. So, as Nuzzi says, while campaigns can't accept foreign donations, the same regulations also state that:

[I]ndividuals cannot “knowingly provide substantial assistance” by “acting as a conduit or intermediary for foreign national contributions and donations.” Individuals can’t legally make donations under a false name, either, meaning that if you’re keeping score: Clinton’s campaign appears to have violated the law once, and O’Keefe’s organization twice.

At the presser, O'Keefe acknowledged that his group had indeed broken the law, but said that really, it was no big, because what they'd done was roughly equivalent to "jaywalking," while the Clinton campaign's crime was proof of an entire culture of corruption and illegality. And probably MURDER!

The Clinton campaign issued a statement Monday night, before the grand unveiling, downplaying the severity of the campaign's many crimes:

“This video shows a Project Veritas operative yet again unsuccessfully trying to entrap campaign staffers who very clearly rejected any foreign donation," said Jesse Ferguson, a spokesman for the Clinton campaign. "Our staffers understand and follow the law, as demonstrated even in their selectively edited video. Project Veritas, on the other hand, has been caught trying to commit fraud, falsify identities and break campaign finance law -- not surprising, given that their founder has already been convicted for efforts like this."

Jeez, a guy gets caught just one time trying to break into a U.S. senator's office and you have to keep dragging that up?

O'Keefe promises that even more shocking undercover videos are on the way, so get ready for astonishing footage of Clinton staffers re-feeding parking meters instead of moving their cars, and perhaps something really dastardly like Huma Abedin changing lanes without signaling.