James O'Keefe DID TOO Find A Evil Liberal Genius, Shut Up DOKTOR ZOOM! 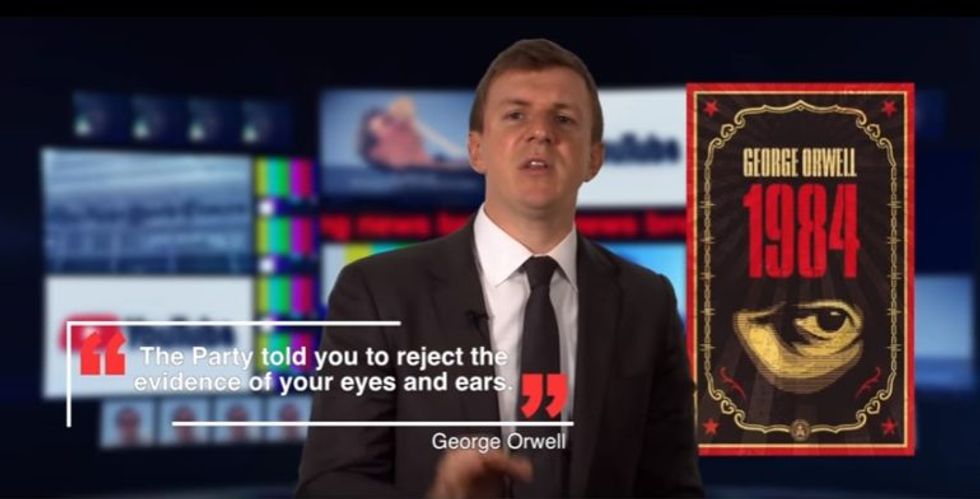 Well OF COURSE he invokes Orwell, that ol' socialist.

Yesterday, we told you all about the latest "investigation" by America's Greatest Undercover Journamalist, James O'Keefe, whose "Project Veritas" (Latin for "be outraged at whatever footage we can scrape together") had proven that a low-level guy who posts New York Times videos to social media has decidedly leftish politics, and really likes to brag about what a big deal he is, and therefore the mainstream media can't be trusted.

Why is James O'Keefe attacking this self-important confabulator? He should be recruiting him!

In our story, we noted that while the target of the exposé, one Nick Dudich, definitely said mean things about Donald Trump and made up a dumb story about being James Comey's godson, Project Vertigo didn't actually show any evidence that Dudich had managed to actually slant the news through his fairly minor position as a guy pushing other people's work onto social media platforms. Well! That caught the eye of somebody at Project Vanitas, because they called us out on the Twitter machine:

So we went and looked at their new video and print article, which has the catchy title "American Pravda, NYT Part II: Exploiting Social Media and Manipulating the News." In it, we see Dudich bragging to Project Verbosity's never-seen "reporter" about how he can place NYT videos where they'll either get lots of views or sink into obscurity. The video then moves on to argue that because YouTube's "news" section highlights videos from major newspapers and news networks, YouTube chooses which voices America gets to hear, and that's not fair!

As proof that Dudich is doing a bunch of liberally biased exploiting and manipulating, we see him feeding a male "reporter" a load of cowflop about what an influential guy he is:

O'Keefe says, in a voiceover positively reeking of gravitas, that "Dudich's biased treatment" of that story portraying Facebook in a negative light "is a clear violation of his company's ethical handbook," all for the sake of protecting the many friends Dudich claims he has in Silicon Valley. We then get another clip of Dudich talking to the lady "reporter" who got most of the hidden-cam video in the first video, telling her how he knows all the coolest proprietary stuff about YouTube. Somehow, the guy whose boasts about being James Comey's godson were proof he's an unreliable liar is now treated as an absolutely credible source. He says he knows how to game YouTube rankings and has lots of friends on the inside, so obviously that's proof of liberal bias all over the news. This bastard made a video critical of Facebook vanish, just because he wanted to protect the interests of all his buddies in the tech industry -- Outrageous!

One tiny problem with that narrative: That Facebook story Dudich boasts about burying, so nobody would see it? Since it went up September 18, it's gotten over 170K views. In fact, after the NYT's obit on Hugh Hefner (198K views), a thing about "How Junk Food is Transforming Brazil" (194K views) and an incomprehensibly popular (171K views) story about luxury t-shirt designer Virgil Abloh, the Facebook piece is the fourth most-viewed video on NYT's YouTube page in the last month.

Even assuming some spike in views yesterday from people who saw the Project Very Bad video, it looks like this Dudich boy is abysmally bad at burying news. Maybe Dudich was talking about "Keeping Indian Folk Painting Alive," which only got 566 total views. America will never know the ugly truth about Indian folk painting, for sure.

Dudich does claim he has an advantage in getting good placement for NYT videos, because "my friends curate the front page" of YouTube -- another boast Project Vermiform takes at face value. They meet with Earnest Pettie, a guy at YouTube who Dudich knows, and based on a seriously skewed interpretation of what he says, O'Keefe scolds YouTube for putting their finger on the scale and giving NYT videos "preferential treatment." This is where the evidence of "bias" really starts falling apart, because it turns out Earnest Pettie is far more interested in talking about neato tech than in bragging about what an awesome, powerful guy he is.

Pettie, a "Brand and Diversity Curation Lead" at YouTube, does say a nice thing about Dudich, describing him as "one of the people I think who has more knowledge about YouTube as a platform than probably anyone else that I know," but that's a far cry from Project Volatile's claim that Pettie "helps push Dudich's videos to the top" -- Pettie says nothing of the sort. But Pettie does talk, enthusiastically, about a relatively new feature in YouTube, the "news carousel" that appears at the top of Youtube's News page:

And what nefarious shenanigans in skewing the news does he confess to on hidden camera? (Also, why a hidden camera? He's happy to talk about his job.) He says the "news carousel" helps connect viewers with videos from YouTube's news partners, which include major newspapers and TV news networks. The New York Times is one of those partners, so we guess that's how Pettie supposedly "[pushes] Dudich's videos to the top" -- along with stuff from ABC, Fox News, Al Jazeera, the Today show, RT UK, and ESPN. The horror.

Here's what James O'Keefe considers proof that YouTube is a horribly biased unfair slanter of the news, exactly like Pravda. Asked if YouTube's algorithms can be fiddled with "to say, less of that?" ("That" presumably being content that YouTube wants to suppress.) Pettie explains,

Realistically, that's what the... that's what the news carousel kind of does. So like, it's above the search results so, at the very least, we can say this shelf of videos from news partners is legitimate news because we know that these are legitimate news organizations. And if at that point, somebody decides they're going to scroll past that and go find Alex Jones, well, they were looking for him to begin with anyway.

OMG they are picking winners and losers and not including Highly Respected Journalist Alex Jones among the legitimate news! This information tyranny, O'Keefe vows, will not stand, man. (Also, it turns out Pettie, interviewed in September, was a bit of an optimist -- YouTube's search algorithm needed tweaking after the site tossed up tons of conspiracy videos when people searched for information on the Las Vegas mass shooting.)

You can almost hear the men of Delta House humming "The Star Spangled Banner" as O'Keefe makes the perfectly reasonable argument that the very best standards for what counts as "news" are no standards at all:

"Illegitimate news," what does that even mean? [Hey! Pettie never even says anything about "illegitimate" news organizations -- Dok] Who decides what is legitimate and what is illegitimate? Why do they have the power to make someone legitimate or illegitimate just because they don't like them? Is that really the environment, the news environment, that we want to live in?

Then he brings out the Big Intellectual Guns, invoking a dear old lifelong socialist of the last century who would have eaten O'Keefe's lunch with vigor and spit out a satire on the silly little booger:

You know, George Orwell wrote a book called 1984, and in that book, he said "The Party told everyone to reject the evidence of their eyes and ears" -- it was their final, most essential command. We finally have irrefutable proof that this kind of thing is happening. It's happening on platforms that have almost universal control over the information we have access to, and honestly, it's worrisome. Stay tuned.

We guess in O'Keefe's understanding of the media landscape as mapped onto 1984, the Party is anyone who doesn't recognize that the government is making the frogs gay.

So there's Project Vespa's proof that the New York Times is systematically slanting a news. A guy who works (or worked) there bragged about deep-sixing a video that actually got more views than most other recent NYT content, and a guy at YouTube confesses that they give preferential treatment to reality.

If you want a vision of the future, imagine a human face looking at cat videos -- forever.

Yr Wonkette is supported by reader donations. Please click here to donate -- if you don't, we'll see you on the Telescreen.