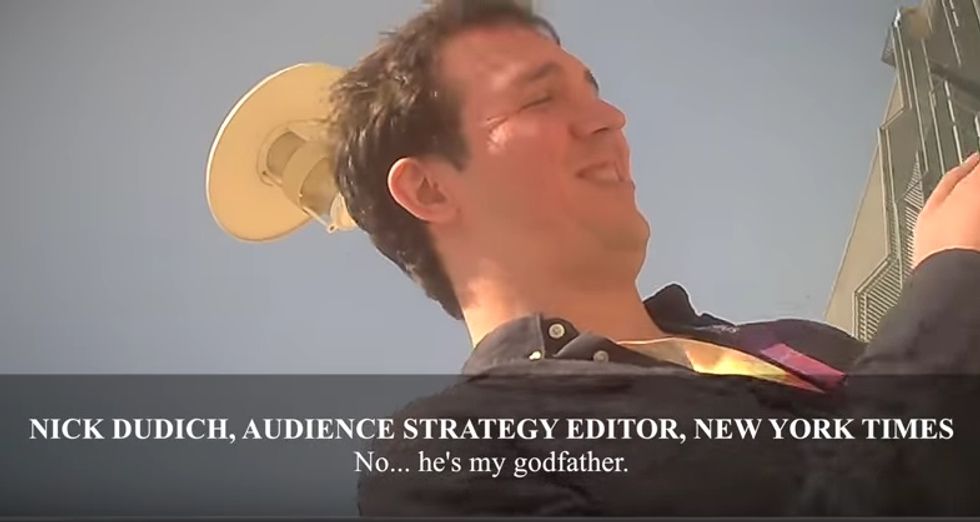 Surely this will bring the lamestream media to its knees

America's Greatest Journalist, James O'Keefe, and his "Project Veritas" (Latin for "very tight underpants") are back with another hard-hitting investigation of shocking liberal bias in the lamestream media, in which one of O'Keefe's hidden-camera operatives catches a low-level twentysomething twit at the New York Times bragging about what an influential, connected guy he is. What! A low-level person in media with an inflated sense of his own importance? Stop the presses!

The typical O'Keefe method involves the undercover asshole manipulating someone into saying or doing something inflammatory, or inventing a wildly implausible scenario to show terrorists could bring Ebola virus into the USA by speedboat. This time out, though, O'Keefe actually does appear to have found a bona fide schmuck who works at the New York Times, one Nick Dudich, an "audience strategy editor" whose job is to place NYT-produced videos on various social media platforms like the Times Facebook page or YouTube channel.

The Project Very Tossed reporter catches Dudich talking trash about Donald Trump, going on a fair bit about his own politics, and outright making up a story about being James Comey's godson. While Dudich is definitely happy to say he detests Donald Trump and fantasizes about using his position at the Times to somehow bring down the president, it's worth noting that O'Keefe doesn't offer a single example of Dudich actually slanting the news. How could he? Despite having a job title with "editor" in it, Dudich isn't actually producing anything; he's posting other people's work to social media, at least until he gets shitcanned thanks to O'Keefe's exposé.

Here's the SHOCKING VIDEO that tears the lid off the biased New York Times, or at least finds one millennial dumbass who probably won't be working there much longer. And yes, the title for the whole stupid project really is "American Pravda," since obviously the New York Times gets its marching orders from either Moscow or the Deep State. Kind of hard to call it "government-controlled media" when the Republicans are in office.

We learn that before being hired to embed videos on social media, Dudich worked for both the Obama and Clinton campaigns, or at least he volunteered for them in some capacity, he says. He might be embellishing his role there, too, but O'Keefe treats him like he was a key operative -- and now here he is, slanting the news!

Dudich mocks the idea of journalistic objectivity, and suggests "That's why I'm here" -- to somehow influence the news by picking videos that will go on Facebook. O'Keefe solemnly quotes the Times ethics handbook here:

Journalists have no place on the playing field of politics. Staff members are entitled to vote, but they must do nothing that might raise questions about their professional neutrality or that of The Times.

We also get a segment of Dudich talking about how he'd like to bring down Trump; conveniently, O'Keefe has edited out whatever question prompted Dudich to say any of this:

I'd target his businesses, his dumb fuck of a son, Donald Jr., and Eric...

Target that. Get people to boycott going to his hotels. Boycott... So a lot of the Trump brands, if you can ruin the Trump brand and you put pressure on his business and you start investigating his business and you start shutting it down, or they're hacking or other things. He cares about his business more than he cares about being President. He would resign. Or he'd lash out and do something incredibly illegal, which he would have to.

This looks like one of those trademark O'Keefe selective edits. What was the question? Perhaps "If you were devising a campaign's media strategy to do the most damage to Donald Trump, what would it look like?" We don't have any idea what the context for that bit of video is, but O'Keefe is happy to let the viewer assume Dudich's discussion of what he'd do, or might want to do, is a description of his actual job duties at the Times. O'Keefe long ago stopped releasing the unedited video he works from, so we'll never know what the "reporter" asked Dudich. Pure speculation: Maybe she pretended to be recruiting him to do media for an anti-Trump PAC.

The Project Verdigris hidden camera also catches Dudich in a great big lie about being James Comey's godson, after which he spins a tale about having belonged to Antifa at some point in the past, where he punched Nazis and KKK guys in the face for the FBI, at the direction of his godfather James Comey:

The video devotes several dramatic minutes to debunking the Comey story, including a hilarious sequence complete with exciting graphics of maps and an airplane, while O'Keefe intones,

We sent the journalist to scour church records where we believe Dudich had been baptized. We sent undercover journalists to California, New England, Washington DC, and to Dudich's aunt's house in North Carolina.

And yes, they even use a hidden camera while interviewing Dudich's aunt and his father, because -- no reason, really, but if you're going to be undercover, then goddammit, you're undercover. His dad says he's never even met Comey and has no idea why Nick would make that up. The unnamed Veritas operative then confronts Dudich with his falsehood, and the lad admits he made that all up because "It's a good story."

Shame on him! Why, that's almost as outrageous as James O'Keefe's first media stunt, when he went on "Fox & Friends" all dressed up like a pimp from a '70s blaxploitation movie, even though he wore a plain ol' suit to his selectively edited meetings with ACORN affiliates.

The video ends with O'Keefe doing his Serious Face and worrying very sincerely about journalistic ethics:

But the fact remains that Nick Dudich lies. And he's a gatekeeper at the New York Times. And that fact should be worrisome to the bosses at the "paper of record."

Then -- without a single example of Dudich's politics actually showing up in his work -- it's time to hop on O'Keefe's Flexible Flyer for a trip down the slippery slope:

If the Times can't sniff out people like Nick Dudich, journalists with such questionable integrity and character, who else are they letting spread disinformation in their name? Or is this more systemic? Does the Times lack journalistic integrity altogether?

The Usual Suspects in the wingnuttosphere have been going wild about this shocking exposé of the deep anti-Trump bias in everything the New York Times does, and the Times has responded to the kerfuffle, noting Dudich was hired only in the spring of this year, and releasing a statement from spokesperson Danielle Rhoades Ha:

Based on what we’ve seen in the Project Veritas video, it appears that a recent hire in a junior position violated our ethical standards and misrepresented his role. In his role at The Times, he was responsible for posting already published video on other platforms and was never involved in the creation or editing of Times videos. We are reviewing the situation now.

Translation: This guy isn't a reporter, he's not making or editing videos, he exaggerated his importance, and has probably already been fired.

Then again, given his demonstrated skills of exaggeration and self-promotion, he might make a dandy addition to the staff of Project Veritas. Or perhaps Dudich will say he smelled a rat and was trolling O'Keefe's "reporter" the whole time. Anything's possible in a James O'Keefe joint.

Yr Wonkette is made possible SOLELY by reader donations. Please click right here to send us money, because darned if our wife, Morgan Fairchild, who we've seen naked more than once, ever gives us a dime.