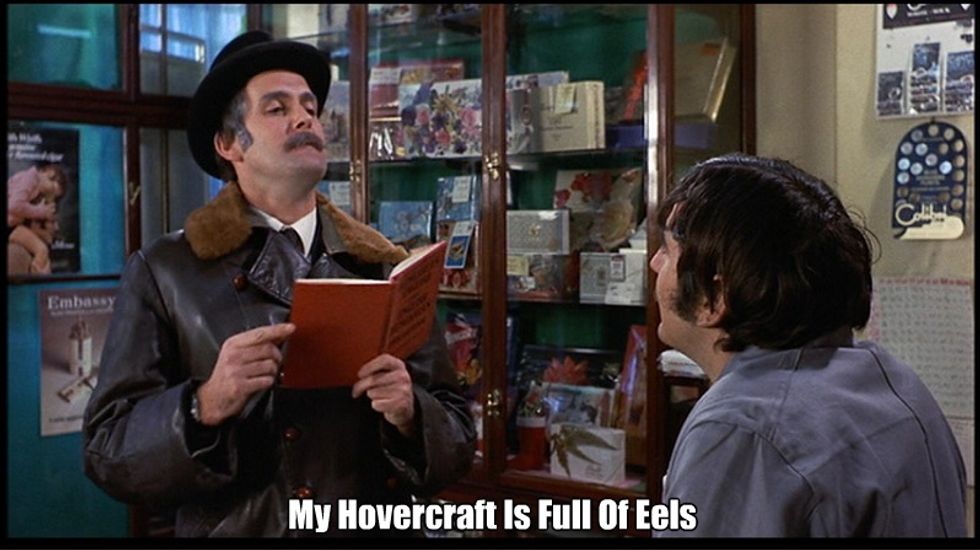 He's a very talented guy; he'll be able to pull it off.

Oh, goody -- the other shoe has dropped. Friday, we brought you the exciting news of James O'Keefe stepping on his undercover dick while trying to infiltrate George Soros's Open Society Foundations (OSF). Everything was going just peachy, he explained, until he forgot to hang up the phone after calling Dana Geraghty, a program specialist at OSF, and ended up leaving a seven-minute message of himself discussing his dirty tricks plan with others at his "Project Veritas," a group whose very name may violate truth in labeling laws. If he were honest, he'd call the place "Project Veritasiness." O'Keefe solemnly acknowledged in an interview with Andrew Breitbart's Exquisite Corpse that he was certain the Soros people “shared this recording with members of the media, who may be publishing it at some point.”

Well, give James O'Keefe for being accurate one time in his life: the same day Breitbart ran its story on O'Keefe's cunning plan, the New Yorker ran a lovely piece by Jane Mayer about the muffed infiltration attempt and about the role of private opposition research groups in political campaigning. Mayer obtained a copy of the recording from Ms. Geraghty, who was not especially impressed with James O'Keefe's tradecraft, as they call it in the spy business (or at least in novels about the spy business). Geraghty routinely lets calls from unfamiliar numbers go to voicemail, and noticed O'Keefe's message immediately when she checked her online inbox:

“Who leaves a seven-minute voice mail?” Geraghty asked herself. She clicked on it.

“Hey, Dana,” a voice began. The caller sounded to her like an older American male. “My name is, uh, Victor Kesh. I’m a Hungarian-American who represents a, uh, foundation . . . that would like to get involved with you and aid what you do in fighting for, um, European values.” He asked Geraghty for the name of someone he could talk to “about supporting you guys and coördinating with you on some of your efforts.” Requesting a callback, he left a phone number with a 914 area code -- Westchester County.

She heard a click, a pause, and then a second male voice. The person who had introduced himself as Kesh said, “Don’t say anything . . . before I hang up the phone.”

“That piqued my interest,” Geraghty recalls. Other aspects of the message puzzled her: “Who says they’re with a foundation without saying which one? He sounded scattered. And usually people call to get funding, not to offer it.” Victor Kesh, she suspected, was “someone passing as someone else.”

Presumably, Geraghty won't be calling any radio stations to dedicate "Smooth Operator" to O'Keefe anytime soon. Mayer's article goes on to summarize the rest of the call; the New Yorker also helpfully provides a transcript and the audio of the call as broadcast on WNYC's "New Yorker Radio Hour,” embedded below because we missed the link the first time we looked, durr.

So what huge secrets do we learn about the O'Keefe investigative clown car? For one thing, Geraghty isn't impressed by their stealthiness. She tells Mayer the brain trust -- for all its investments in teensy recording devices and attempted dirty tricks -- wasn't especially good at internetting:

The accidental recording reached farcical proportions when Kesh announced that he was opening Geraghty’s LinkedIn page on his computer. He planned to check her résumé and leverage the information to penetrate the Soros “octopus.” Kesh said, “She’s probably going to call me back, and if she doesn’t I can create other points of entry.” Suddenly, Kesh realized that by opening Geraghty’s LinkedIn page he had accidentally revealed his own LinkedIn identity to her. (LinkedIn can let users see who has looked at their pages.) “Whoa!” an accomplice warned. “Log out!” The men anxiously reassured one another that no one checks their LinkedIn account anyway. “It was a little chilling to hear this group of men talking about me as a ‘point of entry,’ ” Geraghty says. “But -- not to sound ageist -- it was clear that these people were not used to the technology.”

Oh, the stinger has been STUNG. James O'Keefe, you are OLD. Get with the times, dude. You didn't fool that 28-year-old Soros operative even one little bit. Maybe you should try wearing a rubber Osama bin Laden mask next time.

Mayer and her Sorosbot informants aren't quite finished having a laugh at the Gang That Couldn't Compute Straight, either. Geraghty sent a copy of the message to her boss at Open Society, Chris Stone, who told Mayer the O'Keefe crowd might be scary if they were the least bit competent:

“The Watergate burglars look good compared to these guys,” Stone told me last month. “These guys can’t even figure out how to use an Internet browser, let alone conduct an undercover operation. You read the transcript and you can’t help but laugh.” He went on, “But the issues here aren’t funny. There’s some kind of dirty-tricks operation in play against us.”

It would appear that Mayer's own investigation of the recording and O'Keefe's operation is what triggered his "exclusive" revelation to Breitbart: she asked him specifically about the "Victor Kesh" call to Geraghty. After he initially refused to comment on "what he called 'investigations, real or imagined,'" she let him know she'd heard the tape. So he hurriedly went down to the New York offices of Open Society to do his dumb video that we reported on Friday, so at least he'd have something semi-scandalous on tape -- mostly people brushing by him and refusing to talk to him as they left the building. Also, as for the contention by O'Keefe's Polish collaborator, Matthew Tyrmand, that Soros is funding opposition to Poland's right-wing government, a spokeswoman for the Open Society Foundations, Laura Silber, told Mayer,

We were asked if we fund the Polish opposition -- we don’t, directly or indirectly. We do support groups that advance the rule of law and human rights, which are under threat in Poland today.

See? If that's not a confession, we don't know what is!

Go ahead and read Mayer's whole piece, which only starts with O'Keefe's bungled ratfucking attempt and then looks at how dark money is funding all sorts of opposition research and astroturf "activists" who'll dig up dirt on almost anyone for the right price. It's good solid reporting, and Mayer didn't have to resort to any stupid stunts like dressing up as a pimp, not even once.