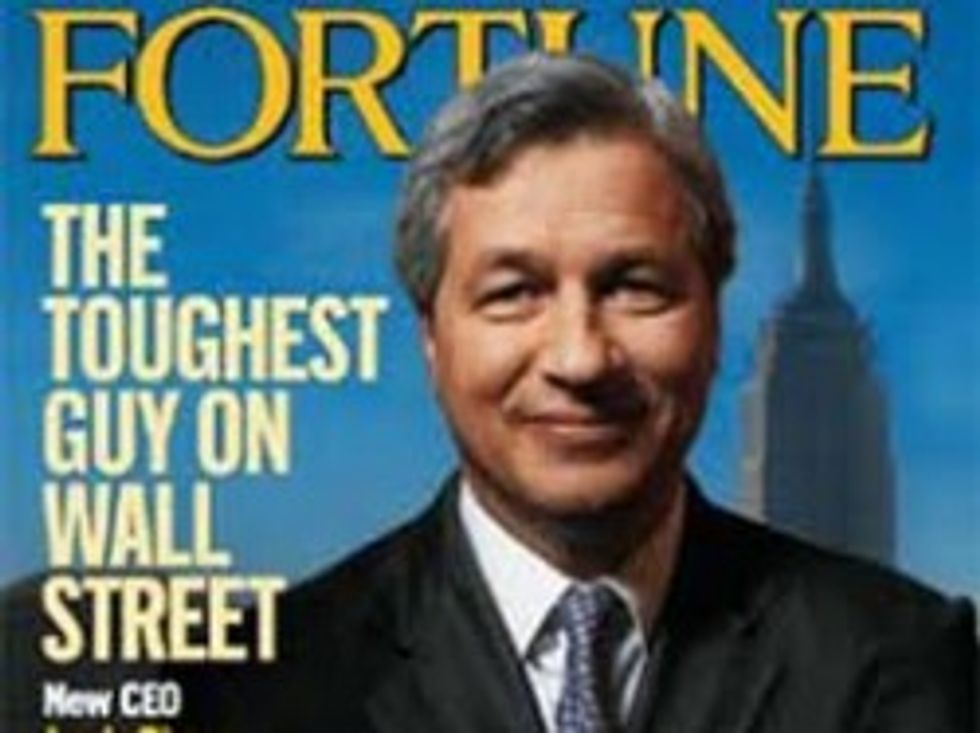 Remember that whole thing a few years ago, something about how the banks ruined the housing industry, your employment prospects, your children’s employment prospects, and the entire country, really, and in turn got billions of dollars from the taxpayers and continue to rake enormous bonuses and pretty much set the economic policy of the entire nation? Think hard now — remember that? And remember how basically nothing happened to make sure that banks weren’t too big to fail, and how no one went to jail, and how the bankers kept making lots of money while we all went about trying to restore the pieces of our shattered lives? Do you find it “stunning” that such unaccountability acting in combination with the lack of serious financial regulations has meant that JP Morgan kept screwing around with synthetic credit default swaps and lost about two billion or so dollars?

Because Gretchen Morgenson from the New York Times finds it “stunning” that this atmosphere of lax enforcement has led to JP Morgan head Jamie Dimon acting all “sloppy” and “stupid."

WHAT goes around comes around. Sometimes it happens sooner than you’d think. That round wheel turned on JPMorgan Chase last week, which disclosed that it had suffered a $2 billion trading loss in credit derivatives. That such a hit had befallen the mightiest of banks was perhaps more stunning than the size of the loss.

Stunning indeed. Who would have thought that “the mightiest of banks” wouldn’t be able to self-regulate? But it’s cool, no need to get upset or try to do something about any of this, there’s this little thing called “karma,” maybe you’ve heard of it?

So where does the karma come in? The loss, and the embarrassment it held for Jamie Dimon, the bank’s imperious chief executive, came just one month after a private dinner party in Dallas at which he assailed two respected public figures who have pushed for policies that would make banks like JPMorgan smaller and less risky. One was Paul Volcker, the former Federal Reserve chairman, whose remedy for risky trading by too-big-to-fail banks is known as the Volcker Rule. The other was Richard W. Fisher, president of the Federal Reserve Bank of Dallas, who has also argued that large institutions should be slimmed down or limited in their risky trading practices.

Yup. Karma is a motherfucker, because now, Jamie Dimon is embarrassed! Sure, he and his buddy John Thune (R-S.D.) have it all under control, but still! That was EMBARASSING! His company that he still gets to be in charge of for some reason lost money and EVERYONE KNOWS, and now that they know, some senators are trying to get him to accept the fact that rules apply to him, which as we all know, they certainly don't. But back to this “private dinner party,” which this intrepid Times reporter found out about through granting anonymity to an “attendee” who was scared of making the bank mad for some reason:

The party, sponsored by JPMorgan for a group of its wealthy private clients, took place at the sumptuous Mansion on Turtle Creek hotel…During the party, Mr. Dimon took questions from the crowd, according to an attendee who spoke on condition of anonymity for fear of alienating the bank. One guest asked about the problem of too-big-to-fail banks and the arguments made by Mr. Volcker and Mr. Fisher.

Mr. Dimon responded that he had just two words to describe them: “infantile” and “nonfactual.”

Hear that? First of all, you are liar liar pants on fire. And second of all, Jamie Dimon doesn’t need nobody telling him to “slim down,” no way José! If he wants to engage in “risky trading practices” that put taxpayer money and the health of the entire economy at risk, that’s HIS business because this is AMERICA and we believe in FREEDOM. Also, his bank came out of the credit crisis as “one of the relatively healthy big banks”(thanks to a taxpayer gift of around $ 12 billion dollars but who’s counting?) so while the government is under his roof, it will play by HIS RULES, missy.

AS overseer of the bank that emerged in the best shape from the credit crisis, Mr. Dimon has gained in stature in recent years. Hailed for his management skill, he has also become the financial industry’s point man in the war against tighter regulation of derivatives and proprietary trading. Almost since the financial crisis began, JPMorgan Chase and its legion of lobbyists have swarmed lawmakers and regulators in an effort to beat back efforts to bring transparency to derivatives and to separate risk-taking activities like proprietary trading from commercial lending units.

JPMorgan has not been alone in these efforts. But it has had more clout because of its position as the grown-up in the financial industry’s playground.

Hear that guys? These are the GROWNUPS in the discussion. Let that sink in. Anyway, your job? Your kids' jobs? Your kids' education? Your house? The things that tie all those things together? Pfft, whatever bro, chill out. Freedom.