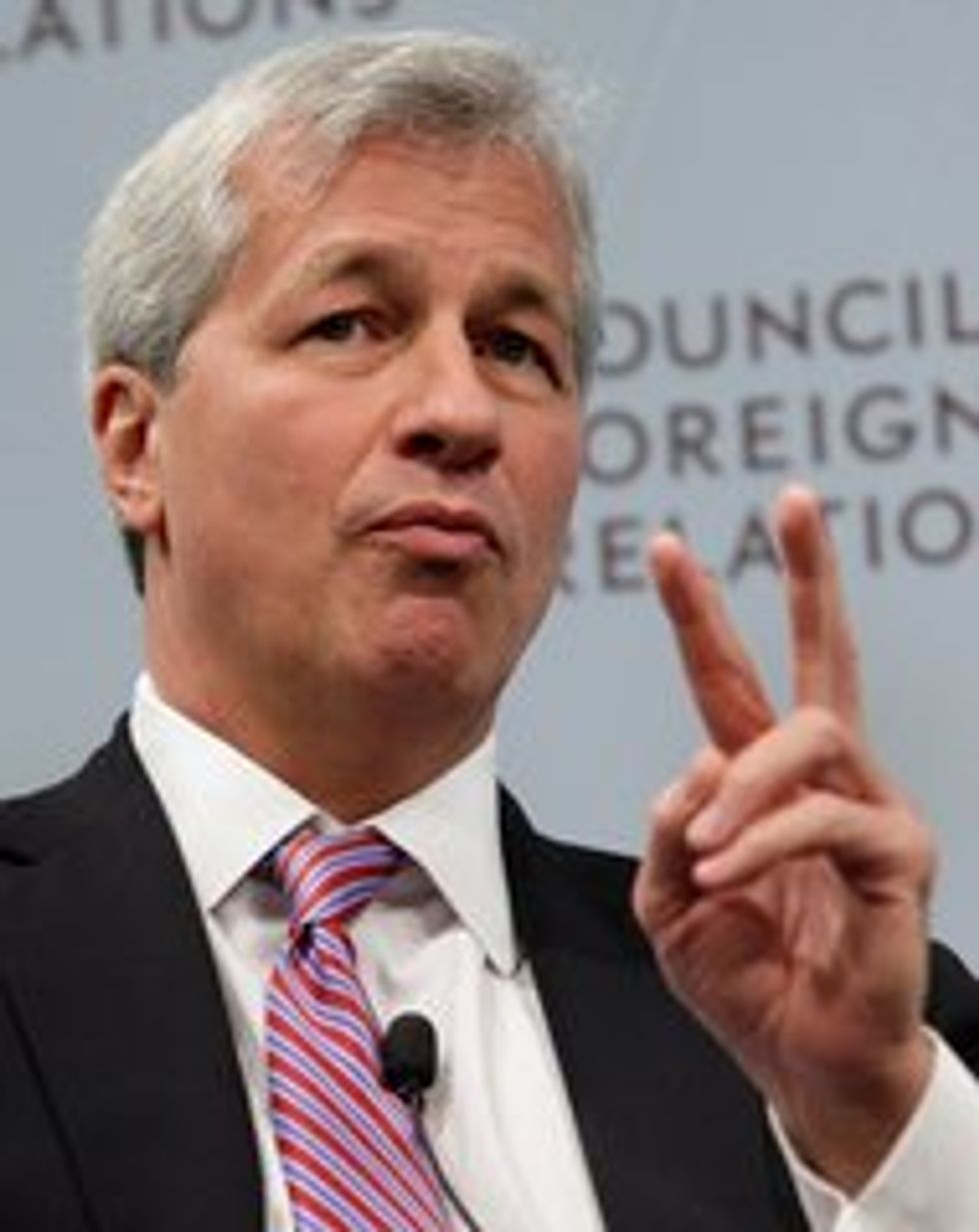 A year after an embarrassing trading blowup led to millions of dollars being docked from Jamie Dimon's paycheck, the chairman and chief executive ofJPMorgan Chase is getting a raise.

Of course he is, because share prices have increased and this is the only thing that really matters. Did JP Morgan, under Jamie Dimon's watch, preside over a global financial crisis, enable Bernie Madoff to conduct a years-long pyramid scheme, and rack up billions of dollars in fines due to a multi-billion dollar trading fiasco executed by the so-called "London Whale," along with earning what may be the largest fine in the history of American financial regulation? Did it also engage in reckless manipulation of energy prices and silver prices, launder money for drug cartels, and break securities laws in mortgage deals? Yes, it definitely did many of these things and probably did most of them, but this just means that Jamie Dimon was able to see the bank through "a difficult period" and thus deserves a raise:

The debate pitted a vocal minority of directors who wanted to keep his compensation largely flat, citing the approximately $20 billion in penalties JPMorgan has paid in the last year to federal authorities, against directors who argued that Mr. Dimon should be rewarded for his stewardship of the bank during such a difficult period. During the meetings, some board members left the conference room to pace up and down the 50th-floor corridor.

And to be fair, it is really really hard to run a big bank, particularly when you are only getting $14 billion in taxpayer subsidies and are not allowed to completely self-regulate.

Now, if you are a Real American who had your life ruined in 2008, or are perhaps coping with monthly student loan payments that will follow you beyond your grave, or are maybe facing an uncertain retirement wherein your savings are in fact shrinking before your eyes because low interest rates are not keeping up with the pace of inflation due (in part) to fiscal policies that soundly support banks instead of Non-Corporate Americans, you cannot be expected to understand this decision, but that is because you, like Salon's Alex Pareene, are not sophisticated to understand the fact that rich people should not be held accountable for their actions in the same way you or I should.

The moral of the story: crime does not pay, unless you are a rich white man in charge of a global financial institution, in which case it pays very handsomely.