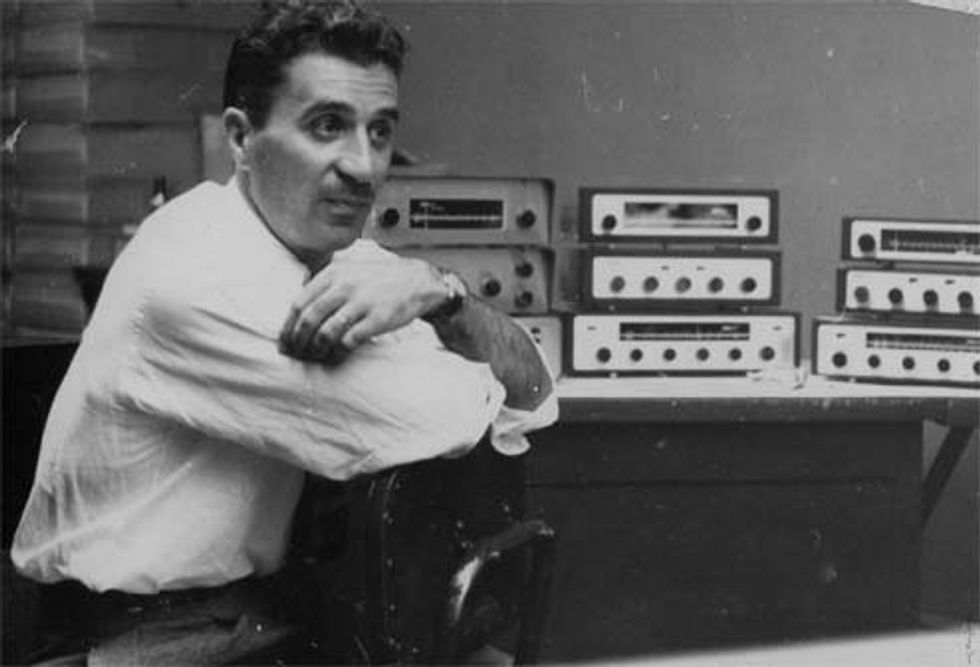 Ever since you first learned that Newsweek was being sold, you have wondered: who will buy this money-losing magazine? Will it be someone hilarious, like the Politico or NewsMax? Today, at long last, the answer was revealed, and it is ... Sidney Harman, 91-year-old speaker impresario and husband of Congresslady Jane Harman? Sure, why not, we can't see any conflicts of interest arising from that tie-up!

Below is the only known (freely available) picture of Mr. Harman, sitting among the piles of high-tech equipment that he will use to modernize Newsweek's hitherto low-tech operation:

With experience reading printed matter that goes back to at least the Hoover Administration, Sidney knows how magazines are run! He also is well-known for "quality of working life" initiatives at Harman Kardon; one of the reasons his bid was the one accepted by Kaplan Test Prep Inc. was that he promised to fire the fewest people. So maybe this is good for Newsweek, at least until the whole operation converts into a Tumblr feed, six months from now?

Some might argue that having a major media outlet owned by the spouse of an elected legislator is a troubling proposition, but CNN had faith in Andrea Mitchell's ability to cover the Fed, so we're sure those worries are unfounded. Future cover stories like "AIPAC Is Awesome And Bose Speakers Will Make You Go Deaf" will be easily-dismissed coincidences. [Ad Age/WSJ]