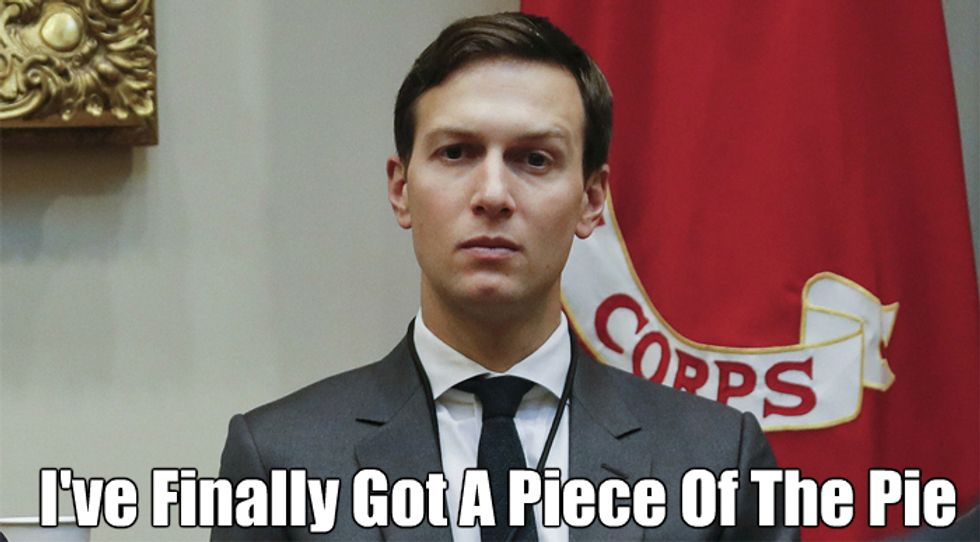 It's a piece of human flesh pie.

We all knew that Jared Kushner and his family were adept users of the EB-5 visa program, which allows rich foreigns to buy themselves a nice green card and eventual citizenship for the low, low price of a $500,000 investment in any U.S. project that "creates jobs." They've been doing it forever, as we learned during last year's campaign. It's a heck of a deal for the investors, who get to jump the line for a shot at citizenship, and for real estate developers, who are delighted to use the lure of EB-5 visas to get big infusions of cash for expensive real estate developments. The only tiny problem, if you look at it in such trivial terms, is that the whole point of the program is to attract cash and development into low-income areas with high unemployment, when in reality the projects being built are luxury towers, which are a lot more fun and lucrative to build and sell. The Washington Post brings us this charming story of how Kushner and his real estate buddies game the system for fun and profit, saving millions in the process.

Records show that consultants working with Kushner Companies and its investors got really creative in defining the "neighborhood" where the tower at 65 Bay Street in Jersey City was located, coming up with a map that defined its immediate locale as

a swath of land that stretched nearly four miles and included some of the city’s poorest and most crime-ridden neighborhoods. At the same time, they excluded some wealthy neighborhoods only blocks away.

The tactic — critics liken it to the gerrymandering of legislative districts — made it appear that the luxury tower was in an area with extraordinarily high unemployment, allowing Kushner Companies and its partners to get $50 million in low-cost financing through the EB-5 visa program.

Lookie! Here's a convenient visual aid to show you how the waterfront luxury complex was located in a poor neighborhood, so obviously that $50 million was helping to make life better for poor folks:

Now, the Post is careful to point out that this is all perfectly legal, and that everybody does it, because everyone does well in the deal: investors, developers, even state officials, who are happy to increase the tax base. It's just that most skuzzy developers don't end up serving as the Chief Son-In-Law of the United States, in charge of everything the president isn't in the mood to do. And of course, the poor neighborhoods the program is allegedly designed to help are completely left out of all the pie. As with so many things, the poor just really have lousy lobbyists and consultants. See the big pockets of high unemployment, miles away from 65 Bay Street? People living there sure as hell didn't get construction jobs, much less employment cleaning the apartments. We're betting if any of them so much as went into the lobby, that'd be cause to call building security, if not the cops.

The Post went out and interviewed some residents of the tower's alleged "neighborhood," and wouldn't you know, they were astonished to learn their poverty had helped fund the thing:

“That’s very sad,” said Pastor Shyrone Richardson of the World Outreach Christian Church in the struggling Bergen-Lafayette section of Jersey City. “Unfortunately, the people who are benefiting from this are not the people in this area.”

Richardson’s church is in a five-block area where nearly 1 in 5 were jobless and three fatal shootings occurred in 2015, according to an analysis of crime and census data.

Apartments in 65 Bay Street go for up to $4,700 a month. The views of Lower Manhattan are pretty impressive, and there are all sorts of nice luxury shops and restaurants nearby -- carefully left out of the map used to qualify for the EB-5 visa program. The unemployment rate there? 2.6 percent in 2015. And what a great deal that EB-5 funding is!

Under the EB-5 program, a wealthy foreigner can get a fast-track residence visa by investing at least $500,000 in a project in a “targeted employment area.” To qualify, the area must have an unemployment rate 1.5 times the national average. For developers, the terms of the investment are more favorable than a bank loan.

The Post notes that the Trump administration is currently looking at possible changes to the program that might outlaw such gerrymanding, and that Jared Kushner is recusing himself from those deliberations. Therefore, if the rules allowing gerrymandering are kept, you can be sure no one had the Kushner family's well-being in mind. To think otherwise would be terribly cynical.

Kushner Companies have financed at least one other luxury building project using the same nifty EB-5 loophole: In addition to the Trump Bay Street tower, which Yr Wonkette wrote about during the primary campaign, there's also the "Journal Square" development that made news early in May when the Kushners did their glitzy investment pitches in Beijing and Shanghai. That project, with about $150 million coming from EB-5 visas, also relies on a map connecting the towers to low-income neighborhoods that are miles away from the actual buildings.

As we mentioned in our first story on foreign investors buying green cards, nobody even knows how many jobs are really created by construction projects funded by the EB-5 program, much less whether any of the jobs actually go to people living in the neighborhoods used -- on paper at least -- to qualify. Nifty! But Mark Giresi, Kushner Companies CEO, insists that there's nothing funny going on, because maybe some people from poor parts of Jersey City would get jobs. It could totally happen!

“In large urban markets like Jersey City these types of real estate development projects create much-needed jobs, particularly in the construction industry across areas of the city that cover multiple census tracts,” Giresi said in a statement [...]

Giresi said the Bay Street project created more than 1,280 construction and other jobs and that 1 Journal Square is projected to create 6,600. Under the EB-5 program, each $500,000 investment must create at least 10 jobs.

As it happens, the limited number of EB-5 visas granted each year tend to fund luxury developments in tony neighborhoods with convenient pockets of poverty close enough to qualify for the program, but not so close that any unsightly poors will wander into the buildings once they're finished. Did any of those jobs Giresi talked about go to people in the nearby blighted neighborhoods? Strangely, WaPo couldn't seem to find any. Maybe they were all still dancing in the streets over the collapse of the World Trade Center.

In interviews along Martin Luther King Drive in Jersey City last week, there was a common reaction. “It’s like we’re being used,” said Helen Gathers, a registered nurse who has lived in Jersey City for 38 years.

Down the block, Laville Penn, a 54-year-old who was released from prison in early 2016 after a drug-possession conviction, was looking for employment. He had been searching for steady work in construction for more than six months, he said, but had found only temporary day jobs.

Now, hoping to pick up some hours, he stopped by a lot where a friend was doing contract demolition work. Penn said the high-rises built in Jersey City are typically union jobs. “It’s difficult to get into the union if you don’t have certification or experience,” he said.

Please sir, may we have some more?

Clearly, these are just lazy takers who simply don't have the gumption to make something of themselves, even though there's that terrific anti-poverty program designed to bring jobs to their neighborhoods. Better cut Medicaid, disability, food stamps, and job training programs some more to give them an incentive to work, because everyone knows those programs are full of fraud.

Come. Let the anger consume you.

And how about the EB-5 program, which wealthy developers (and slumlords! Don't forget Jared's a slumlord, too!) are using to get wealthier? Sounds like a prime example of an anti-poverty program that's not getting anyone out of poverty, and is actually being abused. Any chance it'll be reformed? Don't bet on it: It's a big job creator!