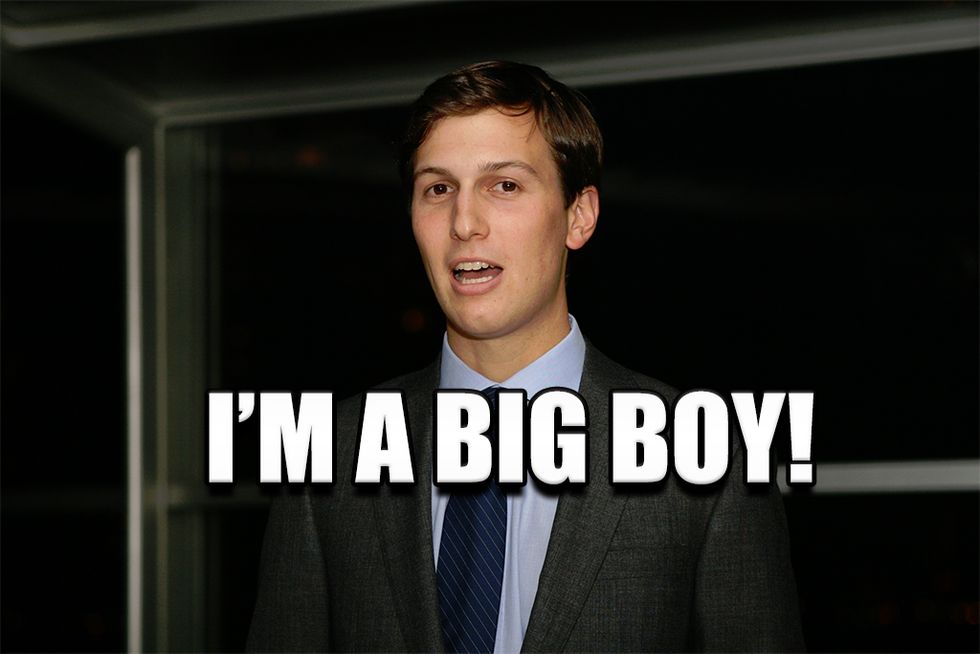 They get security clearances so... gradually.

Jared Kushner is all grown up now and finally has a permanent security clearance, according to a "person briefed on the matter," which is the term used by both the New York Times and Washington Post, so we'll assume the news came straight from Jared. The "person familiar with the process" also said the permanent clearance was granted without any involvement of the "president."

What a relief! No more being shut out of the President's Daily Brief, which -- since Kushner was frozen out of access to classified materials in February -- have devolved into CIA briefers sitting on a couch and calling each other "Brian," "Steve" and "Chick In the Middle" in a vain attempt to keep Donald Trump's attention.

Now that Jared is able to see the highest levels of secure information, he's likely to whip up a Middle East peace plan in a jiffy, or at least start leaking shit to his royal buddy the Saudi Crown Prince again, so ol' Mohammad bin Salman, AKA “MBS,” will know whom he can have assassinated or tortured with no reactions from the US. Allegedly.

Also, Kush's personal attorney, Abbe Lowell, said -- after confirming the security clearance news -- that Jared has been very cooperative with the Mueller investigation, and has been interviewed twice for many hours, because he's just that damn honest:

“In each occasion, he answered all questions asked and did whatever he could to expedite the conclusion of the investigations,” Mr. Lowell said.

In WaPo's story, the "person familiar with the matter" let drop that the first session with Mueller's team centered around questions about Michael Flynn, while the second session, in mid-April, was much longer and covered topics such as

his work on the Trump campaign, the transition and in the White House, according to the person familiar with the matter. This person said Kushner was asked in the April session about Trump’s decision in May 2017 to fire Comey.

The person familiar with the matter also admitted he still can't stop chuckling over the fact that evangelical backers of Donald Trump still haven't freaked out over "our building at 666 Fifth Avenue... I mean Kushner's building, of course."

Yr Wonkette is supported by reader donations. Please click here to help us build our new HQ at the base of Devil's Tower.