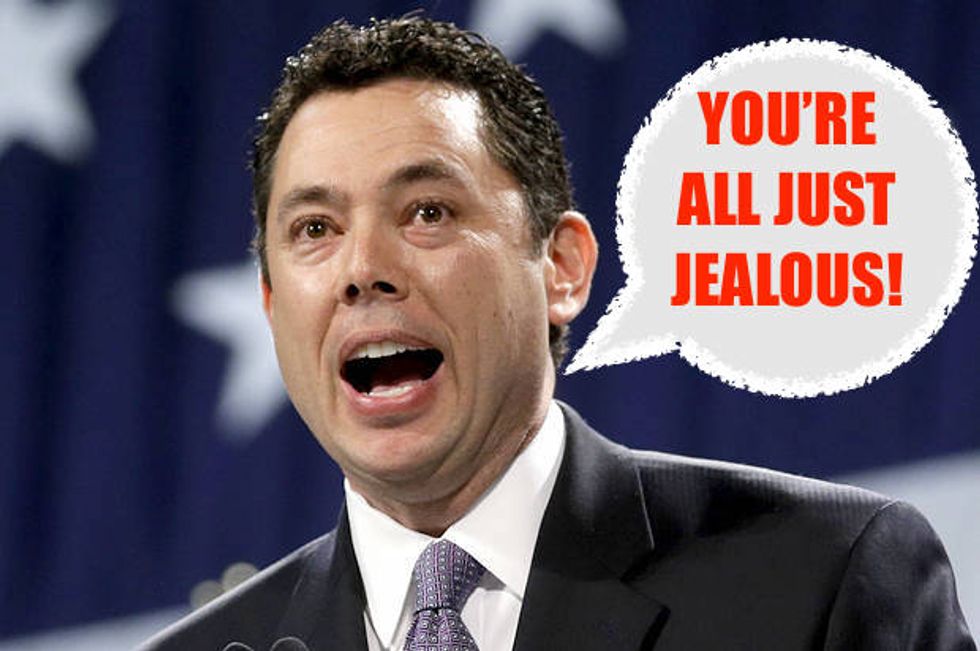 Today in All The Money We Are Making Protesting Republicans Even Though We Love Them Dearly And Agree With Everything They Want To Do: Jason Chaffetz is claiming that the many, many, many people who protested at his recent town hall were actually being paid to protest him, and that they were not even from Utah, probably, so there.

Via The Deseret News:

Chaffetz said the crowd that filled the auditorium at Brighton High School in Cottonwood Heights and spilled over into a protest outside included people brought in from other states to disrupt the meeting.

"Absolutely. I know there were," he said, suggesting it was "more of a paid attempt to bully and intimidate" than a reflection of the feelings of his 3rd District constituents.

In an astounding feat of cognitive dissonance, Chaffetz is also sad about how all these people -- who were definitely being paid to protest even though they are madly in love with Jason Chaffetz and want to have 10,000 of his babies -- will never be satisfied, and are being mean and bullying him even though he said that Kellyanne Conway was wrong to tell people to buy Ivanka Trump's dumb clothes. They want so much from him, these people who are only paid to want things from him and maybe do not even exist. Nothing he ever does is good enough! Waaahhhhhh!

"People are asking me to use the power of Congress to do a full-on fishing expedition to investigate him personally on things that are not required by law. I think my doing that would be an abuse of power," Chaffetz said.

There aren't enough pixels in the universe to list all the times Jason Chaffetz said he would investigate Hillary Clinton even after she'd been cleared infinity times. So we're just going to let his GRRR-MUMBLES about "abuse of power" stand. But what does this guy think about it?

“This wasn’t about Chaffetz being a Republican … This was about Chaffetz straining at gnats for Hillary and Obama, and swallowing camels when it comes to Trump,” said Jeff Swift, a Mormon Democrat from South Jordan who helped organize opponents’ turnout at the town hall.

Yeah, what that guy said.

A Trump supporter who attended the protest insisted that all those protesting -- in addition to being paid to do so, we are sure -- were also wild anarchists!

Don Peay of Utahns for Trump, who has close ties to the Trump family, said he walked out of the meeting that was punctuated by chants including "do your job" "you work for us" and "vote him out."

"It was an angry mob of anarchists. It wasn't just Trump. They hated everything," Peay said. "The behavior at the meeting was a hundred times worse than anything ever out of Trump's mouth."

Just to refresh your memory, let us take a look again, at this angry mob of anarchists being paid to bully Jason Chaffetz and break his heart! Like this lady, a Utah schoolteacher who is for sure this era's Emma Goldman:

At rowdy town hall, ex-teacher asks Chaffetz — chair of House oversight — “what’s your line in the sand” for Trump? pic.twitter.com/8U7IkpZtsS

Oh, for sure. You can tell that later that night, after she made a nice Jello salad for the next day's dinner, that lady went right out and threw a brick through a Starbucks whilst screaming "Property is theft." She just looks the type, no?

We now live in a reality TV universe, and "paid protesters" are the new "they're all just jealous."