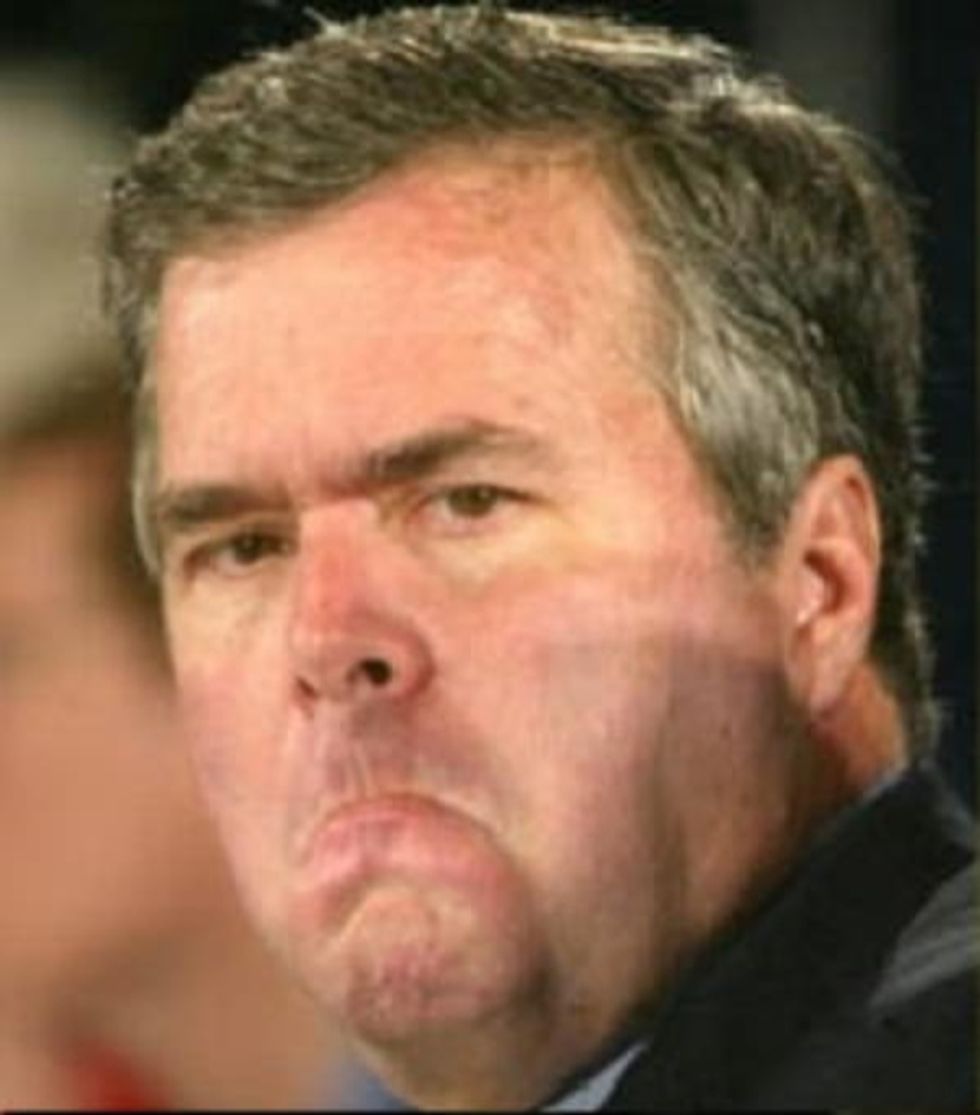 Jeb! Bush continued a family tradition this week: say something stupid, then say something even MORE stupid in an attempt to explain the first stupid thing.

You see, John-Elias-Bush Bush is having a lot of trouble figuring out what to call the U.S.-citizen children of undocumented immigrants, thanks to Donald Trump's beautiful plan to trash the 14th Amendment. Wednesday, in a radio interview, Jeb called those children "anchor babies," and then reporters were all over him asking why he'd use a provocative term that was popularized by anti-immigrant loonies like Iowa Rep. Steve King. It was all too much for poor Jeb, who, when faced with a challenge, doesn't so much have a fight-or-flight response as a "get pissy" reflex.

Following a town hall in New Hampshire Thursday, Bush whined to reporters that it's not a term he prefers, but it's the term all the cool kids are using, and so what's he supposed to call Those People? Jeb got got all snippy with a reporter, demanding, "Do you have a better term? You give me a better term and I'll use it. I'm serious."

Also, it was very rude of the reporter to ask the question while standing behind Jeb, who apparently is still traumatized from all the times George W snuck up and pantsed him. Pressed on the question of whether it was a "bombastic" term, Bush insisted, "No, it isn't. Give me another word!" Another reporter suggested "children born of undocumented immigrants to the U.S.," which is not another word, Jeb explained, it's "like a seven word" thing, and impossible to say.

Apparently, Mr. Bush was unable to hear Yr Wonkette shouting at the computer monitor, "Citizens. U.S. Citizens, you jackhole!" He's very unresponsive that way. In any case, it is not even Jeb's phrase, it is other people's phrase, and why are you getting all over Jeb when in fact he LOVES anchor babies anyway, kind of?

What I said is that it's commonly referred to that. I didn't use it as my own language. What we ought to do is protect the Fourteenth ... You want to get to the policy for a second? I think that people born in this country ought to be American citizens. OK. Now we got that over with.

So "anchor babies" is not Jeb's terminology, although it's not offensive anyway, and while, unlike many of the other passengers in the 2016 Clownigator, he's OK with birthright citizenship, he also wants to prevent anchor babies by keeping their parents out of Our Great Country. Why all this fuss over an innocent word like "anchor"? It's like when Sarah Silverman tried to get out of jury duty by writing "I love Chinks" on her juror information form. Let it go, people.

Poor Jeb. He's all torn between the need to throw some morsels of red meat to the anti-immigrant nuts in his party while trying to stay semi-credible for a dreamed-of run in next year's general election, once all the establishment-GOP money finally buys him the primary victories he needs. If only someone would give him a word to call American citizens who are American citizens because they were born in this country! Is there no one who can solve this taxonomic dilemma, which would surely tax the abilities of Solomon, even if he were helped out by both Funk and Wagnalls?

While Jeb seeks the counsel of the wise on that, we'll just wait for the next pyroclastic flow of pure stupid to come out of his mouth.