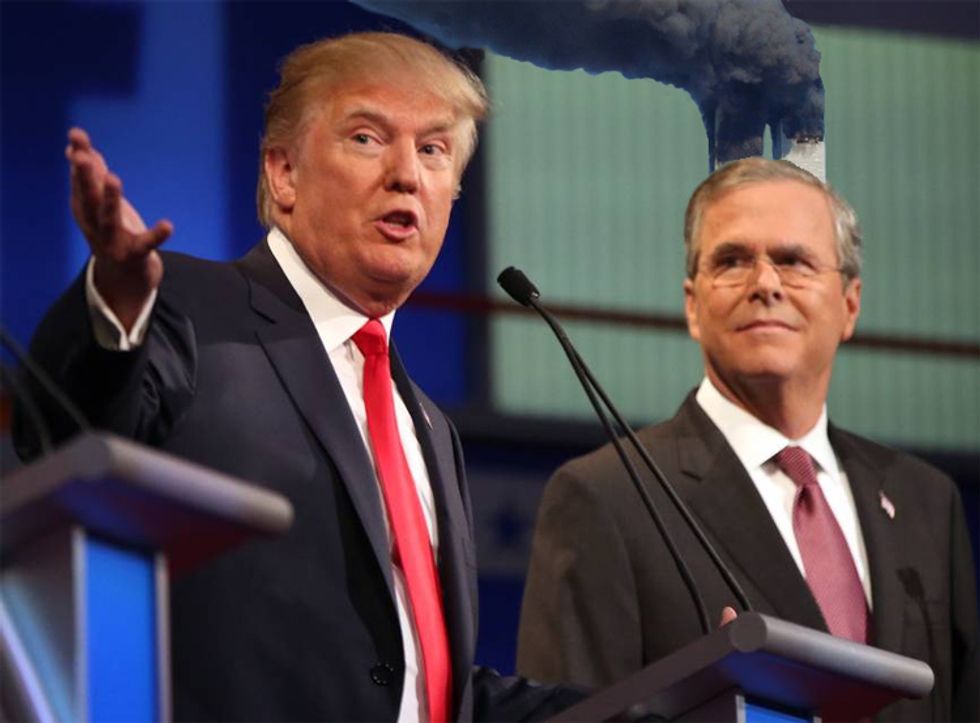 We're actually having a difficult time getting our heads around the latest Donald Trump/Jeb Bush spat, which slammed into the 2016 GOP primary contest Friday with the force of a hijacked 767 full of jet fuel, when Trump suggested that George W. Bush didn't keep us entirely safe during his presidency, seeing as how the 9/11 attacks occurred while he was president. In an interview with Bloomberg News, Trump said that he would be more competent than anyone else, for a certain value of "competence" at least, adding, "When you talk about George Bush, and say what you want, the World Trade Center came down during his time." Interviewer Stephanie Ruhle gave Trump the chance to back away, saying, "Hold on, you can't blame George Bush for that." Trump danced around the question of responsibility, but was quite certain about the chronology:

Apparently, this is unspeakable. At Commentary,the interview was so shocking that not even punctuation survived intact:

An outraged Noah Rothman explained that in suggesting Dubya had dropped the ball, Trump had resurrected and legitimized a "tired liberal conspiracy theory," the sort of crazy talk that had until Friday "been consigned only to underground leftist message boards," because apparently everyone knows that, in real reality, George W. Bush kept us safe, as we all remember. There he was, right on the rubble of the WTC, and if that wasn't keeping us safe, then what is?

We'd just like to double-check on what words mean, because we're pretty certain that saying George W. Bush could have been more on the ball when it came to paying attention to and following up on security briefings is not a "conspiracy theory." Even if he had, there's no guarantee the attacks could have been stopped. Saying he deliberately ignored information to get us into a war is a conspiracy theory, as is saying that 9/11 was an inside job. But it's not conspiratorial to point out that the Bush administration initially scaled back counterterrorism efforts and, after the infamous briefing on Aug. 6, 2001, Bush dismissed his CIA briefer by joking, "All right. You’ve covered your ass, now." That's more of a wossname eyewitness account, even if Donald Trump is a bloviating fool who would undoubtedly react to every daily CIA briefing by bombing and strafing Mexico City.

Not surprisingly, Jeb! didn't take Trump's unkind words sitting down! He eventually pulled himself to something resembling a standing position, then bravely retorted that Trump was "pathetic," to which Trump re-retorted that Jeb was in fact the pathetic one. That's about the closest to a reenactment of the Lincoln-Douglas debates we can expect from this year's candidates.

On CNN's State of the Union Sunday, Bush continued his defense of his big bro:

"Look, my brother responded to a crisis, and he did it as you would hope a president would do [...]

"He united the country," Bush continued. "He organized our country, and he kept us safe. And there's no denying that. The great majority of Americans believe that."

Jeb, the smart one in the family, said Trump's belated retort to Jeb's solitary applause line in the second Republican debate proved Trump "doesn't show that he's not a serious person as it relates to being commander in chief," which suggests that he shares his brother's gift for eloquence, at the least.

Elsewhere in the interview, Jake Tapper asked Bush, “If your brother and his administration bear no responsibility at all, how do you then make the jump that President Obama and Secretary Clinton are responsible for what happened at Benghazi?” This made Jeb squirm a bit (zip to the 2:20 mark for this bit):

Bush: Well, I... the question on Benghazi, which is, hopefully, we'll now finally get the truth to, is, was the place secure? They had a responsibility at the Department of State to have proper security. There were calls for security; it looks like they didn't get it.

And how was the response in the aftermath of the attack? Was there a chance that these four American lives could have been saved? That’s what the investigation is about, it’s not a political issue, it's not about the broad policy issue, is, were we doing the job of protecting our embassies and our consulates, and during the period, those hours after the attacks started, could they have been saved?

Tapper: That’s kind of proving the point of the critics I was just asking about, because you don’t want to have your brother bear responsibility for 9/11 -- and I understand that argument and al Qaeda is responsible -- but why are the terrorists not the ones who are responsible for these attacks in Libya?

Bush: They are! Of course they are! But if the ambassador was asking for additional security and didn’t get it, that’s a proper point. And if it’s proven that the security was adequate compared to other embassies, then fine, we’ll move on.

So: If, let's say, George W. Bush had been warned that al Qaeda was determined to attack and he didn't increase security, then obviously Hillary Clinton did 9/11, we think. In any case, the prospect of another Bush out to defend the reputation of the previous President Bush doesn't exactly reassure us.

Ultimately, we have to give credit to Think Progress -- not usually a barrel of laughs -- for its exhaustive investigation into the key question raised by Trump:

They make a pretty impressive case: Crazy as it sounds, it really does look like George W. Bush was almost certainly president on 9/11/01. It is as yet undetermined what conclusions history will draw from this fact.