Jeb Bush LOLs About How His Mom Used To Beat Him 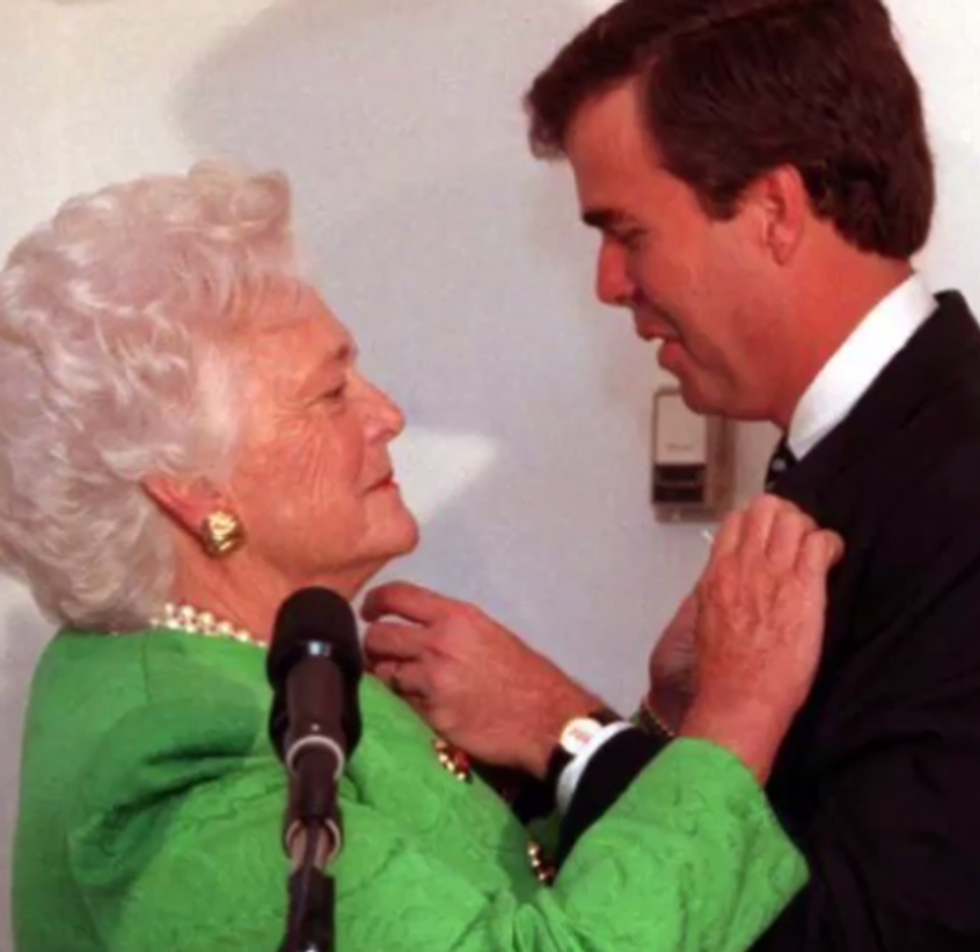 Oh Jeb. What did she do to you?

What up, Jeb? Besides losing for president and trying to win supporters who will never come, because you are so pathetic? Oh, we see, you're kiddin' around at a "campaign event" about how terrible and horrible your mother Barbara Bush is, just wink wink implying that she used to beat your ass all the time:

Former first lady Barbara Bush is "not as great as everybody thinks she is," Jeb Bush said during a lighter moment at a campaign event [...]

"I jokingly say that when we were growing up in Midland, in Houston, that mom was fortunate not to have a child-abuse hotline available," he said, as attendees laughed, explaining that "the discipline of learning right and wrong was her doing."

Haha, so funny! If there was a child abuse hotline back in the olden timey days, maybe Jeb! would have called it and gotten himself removed from all the LMAO abuse that happened in the Bush household! Why is Jeb telling his four supporters in New Hampshire this, and are any of those supporters licensed therapists? We are just asking.

[contextly_sidebar id="FuYD19CobLDOBk0iu0qvXDHX13rvibPs"]Sweet fucking lord, he speaks like a 4-year-old. It's also a confirmed lie, since Bar said last year that Jeb is for certain not her favorite, and Poppy said it's "bullshit" that anyone ever loved Jeb all that much.

[contextly_sidebar id="oLLVcOFPYaprHuICqItEDfYIwqT0kGGg"]And do we all remember Mama Bush's recent supposedly "pro-Jeb" ad where she SEEMS to offer a full-throated endorsement of Jeb, except not at all? Quite to the contrary, she says he SEEMS better than the other candidates. She's not sure yet, though. For Christ's sake, she didn't even want him to run for president, so you know, Marco Rubio, call Barbara Bush maybe.

[contextly_sidebar id="snaLZJ02KChknpjggghBNjggf7UA061K"]Anyway, so we know he's not her favorite son, AT ALL. And now we know his toddler-begging for her love may have something to do with how she used to beat him up, which is lending more credence than EVER to Wonkette's Official Theory Of Barbara Bush's Love For Jeb Or Lack Thereof, which is:

It’s like his entire life, he’s been living in the shadow of his dad and his brother, and he’s just really tired of how every single time he walks in the front door of the Kennebunkport manse, his mother Barbara drops her polite demeanor, stands up on the dining room table and starts flapping her arms yelling “LOSER! LOSER! SHOULDA BEEN AN ABORTION!” And Jeb’s all like “NOT AGAIN MOM!” but she can’t hear him because she’s cracked herself up so hard she’s looking for an inhaler.

We have yet to have our theory seriously challenged.

Is there a weird Daddy Issues angle to this bloggity funtimes post about Jeb Bush being a failure again? Of course! Earlier this month, he told the New York Times that, Bush Fact, he loves Bar more than he loves his daddy. (Why? We do not know, because we are not a total failure like Jeb Bush.) So isn't it weird that on Thursday, just after he said "My mom used to child abuse my bottom, giggle high-kick doy doy doy!" he proceeded to start for literal crying about how his dad is the GREATEST MAN WHO EVER LIVED?

Bush then got choked up in describing his father, former President George H.W. Bush, as "this perfect, idyllic man who to this day is the greatest man alive."

What the fuck OMG we can't even.