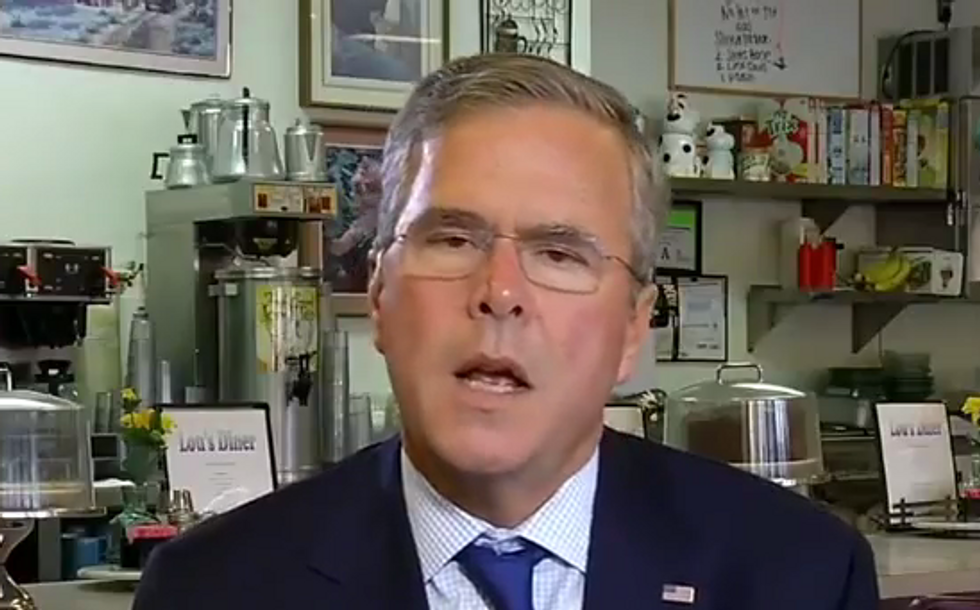 Oh, Jeb. Poor dumb sad sack of cringe-inducing pathetic loser J.E.B. Bush. What kind of stupid did you trip and fall into now? Trying to explain away a prior stupid and just making it worse, as per usual and also as per Bush family tradition? Oui:

“I made the mistake of saying that the Congress operates on a French work week,” he deadpanned. [...]

“I now know that the average French workweek is actually greater than the German workweek,” Bush continued. “So, my God, I totally insulted an entire country—our first ally—that helped us become free as a nation! And I apologize. That did a huge disservice to France. It didn’t really get to the magnitude of the problem: Three day work week.”

Congratulations, Jeb, you're officially the first person-shaped object in human history to surrender to the French. Or, as any of your big brother's pals might call them, those cheese-eating surrender monkeys from Old Europe. You do remember when we hated France, right? It was just after your brother kept us safe from 9/11, when we had to call a beloved potato dish from Belgium "freedom fries" because cranky toddler Republicans had to throw a tantrum for three fucking years after France and the other so-last-season countries throughout the world didn't want to sign up for Dubya's Excellent Adventure in the Iraq.

And now we have to laugh at you (not with you) again, all because you made a "joke" during the last Republican debate about how Marco Rubio sucks because he doesn't even bother showing up for work anymore, at the Senate, where his job is:

But Marco, when you signed up for this, this was a six-year term, and you should be showing up to work. I mean, literally, the Senate -- what is it, like a French work week? You get, like, three days where you have to show up? You can campaign, or just resign and let someone else take the job.

Goddamnit, Jeb, you stupid fuck-knob, we don't even disagree with you! We are always getting ALL CAPS SHOUTY FACE SO MAD at Congress, and we sure as hell don't care for Marco Rubio. And yet. And yet! Here we are, having to roll our eyes at you again, because you leave us no choice. You're also the last person who should be talking about having a job and showing up to work, because what the fuck is it you do again?

Oh right. We looked at your tax returns, and you do rich-guy stuff, like, um, cashing your checks from your rich-guy investments, thanks DAD. That's some hard work right there.

Awww, what's that? We're not even supposed to make fun of your Bush Apology Tour -- to France!!! -- because that's just another one of those interweb things that people in "the real world" don't care about, only in "the pundit world" with "this kind of bizarre tweeting out things that aren't relevant to anybody's real life." Yup, that's why Jeb's numbers are in the basement: the pundits.

Are we allowed to write bizarre tweets about Jeb explaining that he got all tripped up during the Republican debate because he didn't get the questions in advance?

“I don’t think any question that we prepared for was a question we were asked,” he continues, knocking the CNBC moderators, “because they didn’t do anything they said they were going to do.”

Christ, we wish we were making that up. If only those lousy CNBC moderators had slipped Jeb the questions -- and, why the hell not, the right answers too -- before the debate, then he coulda spoked words about them more better, maybe.

But we doubt it. Jeb's had a real long time to prepare his answer to the simple yes-or-no question about whether, knowing what we know now, he'd have invaded the Iraq like how his brother did, and he fucked that up ALL kinds of ways, for DAYS, remember that shit? And then a few months later, he was like, "It was Hillary's fault anyway!"

We will not even bother remembering who put Jeb's struggle with a hoodie out there for pundits to laugh about. (It was Jeb, that's who.)

So far, the Jeb Can Fix It 2.0 Express Train To Loserville is going exactly as we'd expected:

Pressed further on whether he is leaving the race as Trump has urged him to do, Bush said he is not.

“Ha, no. I mean, do we have to talk about Donald Trump? No, I’m not quitting. He’s entertaining, he’s fun. He says really funny things in the breaks in the debate, but I’m running for president of the United States, and it’s a serious endeavor," he said. "I do it with joy. There’s a lot of fun parts of it, for sure.”

Jeb says he's not quitting, and he's serious about that, stop laughing at him, everyone and all you bizarre tweeting pundits out there. Stop it right now! As soon as Jeb gets better at being Jeb, the guy who's been planning to run for president since the last century, then everyone will stop laughing at him and asking him why he keeps hitting himself like that. For reals, you guys. He's serious.