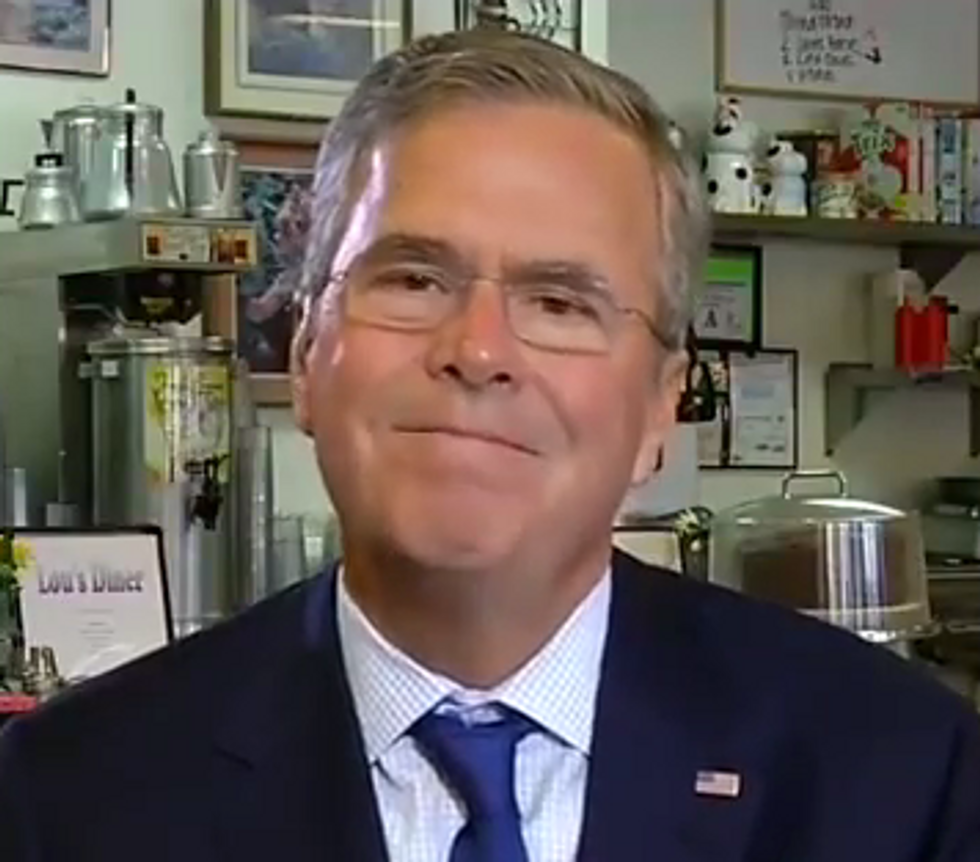 [contextly_sidebar id="mwOGwhSL3gu9Xmb8jNnbHYCzDdPuLg98"]For absolutely no reason whatsoever, Jeb Bush is quite proud of a lot of the things he did when he was the governor of Florida. Like remember that time his Florida National Guard boys did a bang-up job running the Abu Ghraib prison in Iraq, where nothing bad ever happened? Good times! Oh, and then there was the time he heroically forced braindead Terri Schiavo to stay "alive," because of how he's so "pro-life." Thanks for the memories, Jebbers.

But maybe even more exciting than that stuff is that time Jeb solved all Florida's educational problems with a voucher program that shoved struggling kids into Christian schools, so they could learn how Jesus loves them even if they are dumb like Jeb:

Today, 80,000 kids go to private schools because I took on really, really powerful interests. And we won. Dinesha got to go to a Christian school. And I know for a fact what happened that first week. It had to have been. A teacher put her arm around that child and said, 'I love you. You're capable. You can do this. Jesus loves you. We can do this together.'

And guess what? She overcame those two years she was held back. She graduated from high school.

AND ALL BECAUSE JESUS AND JEB LOVED DINESHA! Surely little Dinesha's problem couldn't have been solved by, say, strengthening public schools and funding them adequately, to make sure every child has a chance. Heck no. Would those godless liberal public school teachers have hugged Dinesha and said you're good enough to learn math because have you met my lord and savior Jesus Christ? We think not. Did Jeb mention that Dinesha is in college now, a place no public school graduate has ever set foot?

[contextly_sidebar id="1rsRjqNEy0D5N2xbTXIO1bJSUqBGbzeh"]Jeb forgot to mention (probably because he got distracted trying to figure out how do zippers work) that his little voucher program in Florida was making SO MANY new friends for Jesus, right up until 2006, when the Florida Supreme Court ruled it was unconstitutional:

Justices ruled then that the previous voucher plan violated the state's constitution, which requires the state to create one education system. The court let stand, without making a ruling, a lower court decision that the program also violated the constitition by providing public funds for religious institutions.

Oh yeah, that whole "separation of church and state thing," how quaint a notion! But it was OK, because the state just did some jiggery pokery and pure applesauce to how recipients got their voucher moneys (through "private scholarships" instead of directly from the state), and everything was all better.

According to the Orlando Sentinel, 70 percent of these schools are religious in nature, and many of them don't do adequate testing to see if being Jesus's BFF is actually the best curriculum for struggling kids. Which means, you guessed it, Florida doesn't even know whether this program actually works, all these years later.

Are all the kids just like Dinesha, now endowed with the educational brilliance only achievable when a private school Jesus teacher touches you and says Jesus is your friend? Or is this just a really good campaign story Jeb heard one time?

Oh well, doesn't matter. It's not important if Florida children are actually learning things in private Jesus schools, because as we have learned from Jeb's primary opponent Ben Carson, if you are A Idiot who's not prepared for your chemistry final, to cite one example, just pray real hard to Jesus and He will tell you all the answers.