Jeb! Losing So Hard, He'd Like To Now Remind You He IS A Bush 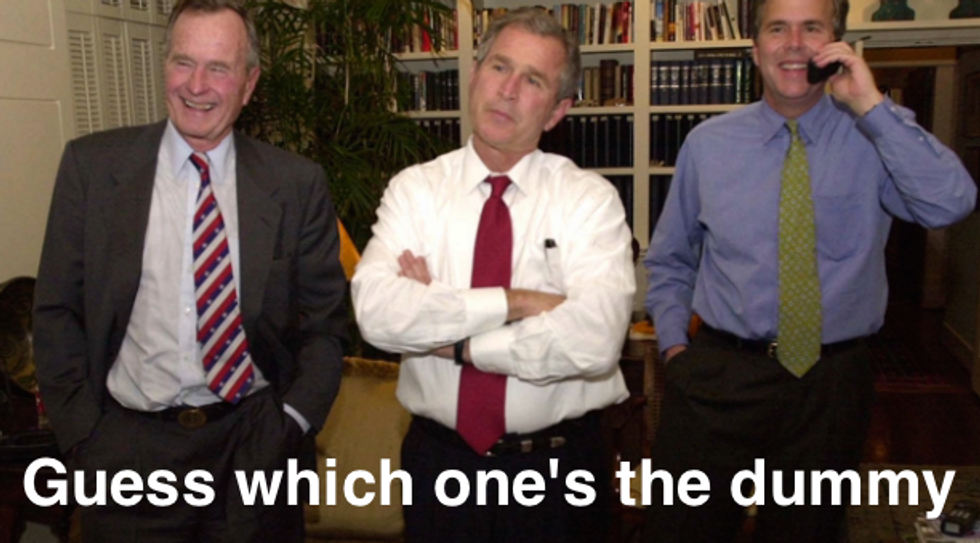 It's a trick question

Jeb! Bush has been losing this presidential election since before he'd even announced he was in it. And it's only grown worse since then. At first, he figured the S-M-R-T move was pretending his last name was Not Bush, because of how the country might still vaguely recall that his one-term daddy sucked, and then his two-term big brother really super sucked. So Jeb was like, "President Bush? No, I'm not familiar with that name," and insisted he is his "own person" with his own "life experience."

Turns out, though, that Jeb's "own person" and "life experience" is repellant to Republicans. So now it's back to basics: trying to legacy his way into the White House, like it's a frat house and his pappy taught him the secret handshake, by bragging about his terrific family genes. At an address to the Mackinac Republican Leadership Conference in Michigan, Bush insisted that he is A Expert on foreign policy -- unlike that hack, former Secretary of State Hillary Clinton -- because his name is Bush. And no, we are not kidding.

"I know how to do this because, yes, I am a Bush," he said. "I happened to see two really good presidents develop relationships with other countries."

Sure, we could point out that despite his phony distancing himself from his family earlier in the campaign, Jeb has always been running as a legacy candidate, with a team of advisers he inherited from Daddy and Big Brother. We could also fact-check Jeb's claim that the former Presidents Bush were "good presidents," on account of how Daddy was a one-termer whose greatest accomplishment was listening to Colin Powell (Powell Doctrine, drink!) and Dick Cheney tell him full-on war in Iraq would be the dumbest fucking thing any president could ever do, only to hand off Powell and Cheney to Junior, so they could show him how to do the dumbest fucking thing any president could ever do. The dumbest fucking thing, by the way, that Jeb also would have done, even knowing what we know now (and also knew at the time, cough cough), except that no, never mind, scratch that, his advisers tell him he wouldn't have done the same thing after all.

But nah. Why bother? We're already tired from fact-checking Jeb's HI-larious claim last week that his brother "kept us safe" because everyone knows the first major terrorist attack on American soil on your presidential watch doesn't even count. So instead, let us applaud, as if we are a roomful of Mackinac Island Republicans who just heard the words "Yes, I am a Bush" -- because yeah, they loved that line -- and welcome Jeb's full-circle embrace of his heritage. We have our doubts about the effectiveness of reminding voters Jeb is a Bush, and assuring them he has learned how foreign policy works from watching his family's tradition of presidential up-fucking, and promising to do presidenting just like a Bush. On the other hand, trying to sell voters on Jeb, just for being Jeb, is failing so spectacularly that this new angle certainly couldn't make things worse.