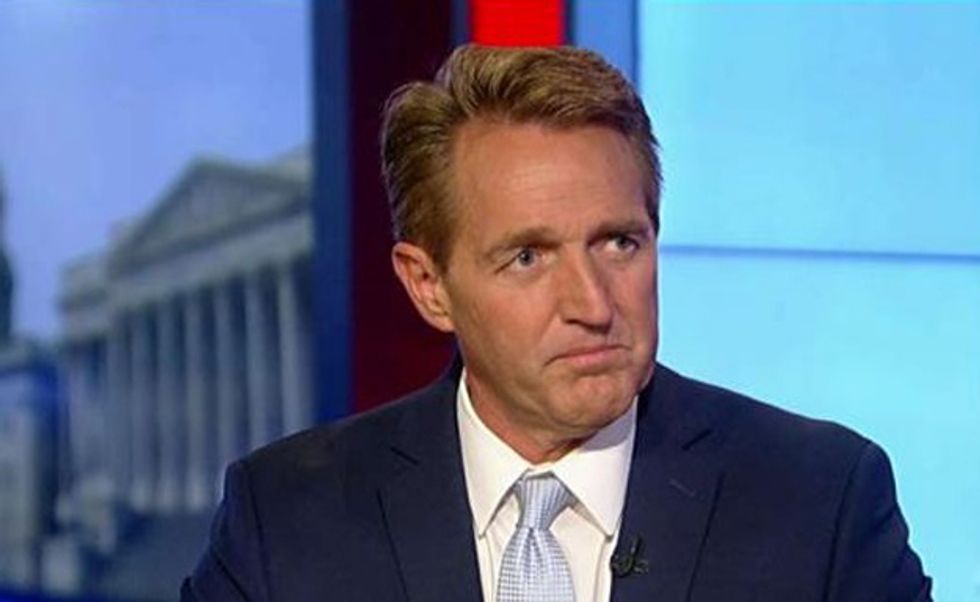 Fuck all y'all, I don't need this.

Arizona's junior senator, Jeff Flake, announced Tuesday afternoon he was done with this US Senate shit and will not run for 2018, because DAMN. Flake told the Arizona Republic the state of American politics has gotten too funky to handle, and that "there may not be a place for a Republican like me in the current Republican climate or the current Republican Party."

Flake has no fucks left to give -- or rather, he has too many fucks to waste them in a political world where giving a fuck gets you primaried from the right. Flake explained his decision to pack it in with a fairly amazing speech on the Senate floor, protesting the insanity that has come to be accepted as the "new normal," and said Americans can no longer be complicit with the behavior of certain presidents of the United States: "If we simply become inured to this condition, thinking that it is just politics as usual, then heaven help us."

He didn't quite name Donald Trump -- or perhaps didn't want to imply Trump doesn't have plenty of little helpers, referring instead to the "conduct of some in our executive branch" and their "reckless, outrageous, and undignified behavior."

And so he's done:

I rise today to say, enough. We must dedicate ourselves to making sure the anomalous never becomes the normal. With respect and humility I must say we have fooled ourselves long enough that a pivot to governing is right around the corner, a return to civility and stability right behind it. We know better than that. We all know better than that.

Flake said that ideally, Congress might get back to just writing laws, the way the Constitution says, and not be jerked around by the jerk in the White House, regardless of what madness comes out of his mouth -- a truly equal branch of government as James Madison wanted Congress to be. Unfortunately, the current president is too crazy to ignore, so that won't work (why yes, we're paraphrasing broadly). But if a Democratic president were as awful as Trump, Flake said, Republicans certainly wouldn't "meekly accept such behavior."

Flake acknowledged that "there is a segment of my party that believes that anything short of complete and unquestioning loyalty to a president who belongs to my party is unacceptable and suspect," but said it's time to show this president some tough love, for the good of America:

The notion that one should stay silent as the norms and values that keep America strong are undermined and as the alliances and agreements that ensure the stability of the entire world are routinely threatened by the level of thought that goes into 140 characters, the notion that we should say or do nothing in the face of such mercurial behavioral is ahistoric, and I believe profoundly misguided.

That's pretty good! Flake went on to invoke Teddy Roosevelt's insistence that it's the duty of the American people not to obey a president, but to keep a president honest, something that seems to be missing from TR's party these days:

To announce that there must be no criticism of the president or that we are to stand by a president right or wrong is not only unpatriotic and servile but is morally treasonable to the American public.

Flake moved on to the international arena, noting that under Trump (still unnamed), we've abandoned the idea that we should somehow care about and be connected to other countries through international agreements, and warned that if we aren't going to lead, Bad Things could happen:

[The] beneficiaries of this rather radical departure in the American approach to the world -- are the ideological enemies of our values.

Despotism loves a vacuum, and our allies are now looking elsewhere for leadership. Why are they doing this? None of this is normal.

There was also some damned fine Angels Of Our Better Nature rhetoric from this Republican:

We were not made great as a country by indulging in, or even exalting, our worst impulses -- turning against ourselves, glorifying in the things that divide us, and calling fake things true and true things fake.

And we did not become the beacon of freedom in the darkest corners of the world by flouting our institutions and failing to understand just how hard won and vulnerable they are. This spell will eventually break. That is my belief. We will return to ourselves once more. And I say the sooner, the better.

By the end, he was directly quoting Lincoln's first inaugural speech and its appeal to those better angels. It was a damned good speech, and an elegant refusal to actually give Donald Trump the middle finger while telling him he needn't bother going to hell, since he has a golf course there already.

Mind you, it would be nice if Flake's voting in the Senate this year were as independent as his defiant speech -- he's been in agreement with Trump's positions 92% of the time.

Also, we guess Jeff Flake pretty much singlehandedly stole the spotlight from any news that might have come out of Trump's little lunch with Republicans today. And we're left with a question:

Yr Wonkette is supported by reader contributions -- please throw us some moneys!