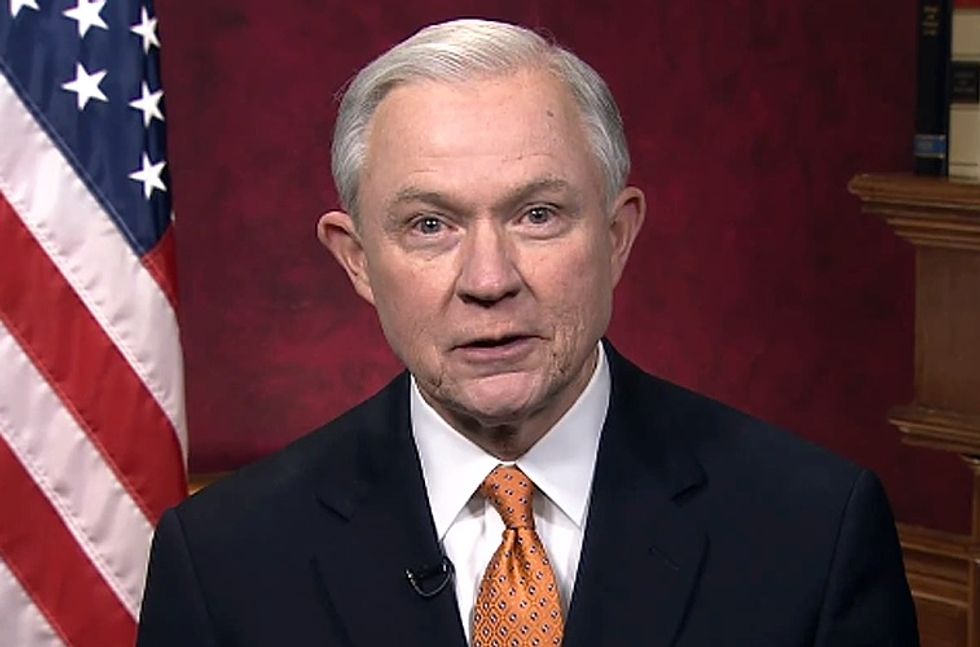 One of Donald Trump's top supporters, Alabama Sen. Jeff Sessions (R-Toontown), did what he could the other day to bolster Trump's credentials as a genuine conservative and Tough On Crime crusader, calling attention to Trump's support for the death penalty. Except for how, oops, it kind of reminded everyone why Trump may not have such a great relationship with The Blacks.

In a Thursday interview on Birmingham radio station WAPI, Sessions enthusiastically reminded listeners of the time when Donald Trump bravely called for New York to reinstate the death penalty, sure proof of his conservative bona fides:

He bought an ad -- people say he wasn’t a conservative -- but he bought an ad 20 years ago in the New York Times calling for the death penalty. I mean, how many people in New York, that liberal bastion, were willing to do something like that?

So he believes in law and order and he has the strength and will to make this country safer. And the biggest benefits from that, really, are poor people in the neighborhoods that are most dangerous where most of the crime is occurring. And I think people can come to understand that if the message continues to pound away.

And by golly, Trump DID spend $85,000 to buy full-page ads with the all-caps headline “BRING BACK THE DEATH PENALTY! BRING BACK THE POLICE!” -- can you tell that's Trump's own work? -- in reference to the notorious Central Park Five case, in which five black and Latino teens were accused of brutally raping a white jogger. The case led to a media panic about gangs of roving minority teens going "wilding" on whites. Yes, Sessions is proud that Trump wanted the death penalty reinstated for a non-capital crime. But what the hell, he likes talking about executing people whenever he can.

[wonkbar]<a href="http://wonkette.com/513200/donald-trump-reminds-us-black-people-not-allowed-in-park"></a>[/wonkbar]Oh, and there was one other small problem with Trump's call for swift executions -- the suspects were coerced into false confessions after interrogation sessions of up to 28 hours, and they hadn't committed the rape and beating at all. Their convictions were vacated in 2002 after a convicted serial rapist confessed to the crime; DNA evidence confirmed his involvement. The wrongly accused men sued New York City, which finally settled for $41 million in 2014.

Ah, but Donald Trump knew they had to have been guilty of something, because they were minorities out in public. When challenged on Twitter in 2013 about having been so wrong in calling for them to be executed -- after again insisting on a swift death penalty for another suspect, the Boston Marathon bomber -- Trump had a ready answer:

So congratulations, Sen. Sessions! Donald Trump really IS all about "Law and Order" -- especially the first half of every episode where they arrest the wrong suspect.

While Donald Trump is busy with yet another "presidential pivot" -- he's done so many that he could be the little plastic ballerina on top of Mom's music box -- Jeff Sessions helped us remember exactly what a great friend Donald Trump is to the African American community, which benefits the most from false arrests and forced confessions.

Now, maybe he could remind everybody of how Trump was sued by the Justice Department for refusing to rent to blacks?