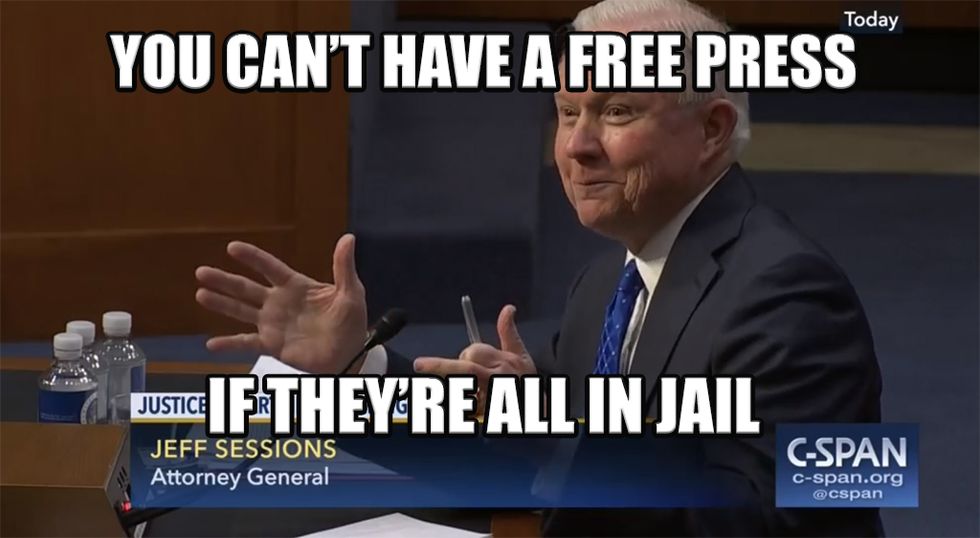 Happy Thirsty Thursday, Wonketariat! We have ALL THE NEWSES today, and so here's a look at some of the things we may be talking about later!

Efforts to put a band-aid on the ACA collapsed after Paul Ryan AND Trump called Patty Murray and Lamar Alexander's bipartisan bill a bailout for insurance companies. Alexander says he plans to introduce the bill anyway, just to piss everyone off.

Not only is Trump lying about calling the families of 20 Gold Star families, but he told one of those families he'd give them a personal check that got conveniently lost in the mail.

While he was desperately trying not to perjure himself (AGAIN) in front of the Senate Judiciary Committee, Jeff Sessions said he'd jail journalists "if we have to." Bring it on.

After being ignored like a common Democrat, Trey Gowdy is threatening to subpoena the Departments of Justice and Agriculture to find all the grifty jerks flying around in fancy jets.

Now that Swamp-Ass Season in DC is over, people are realizing that Trump's has flooded the district with lobbyists who aren't abiding by the rules HE set at the beginning of his administration.

Trump's diversions over the last three weeks seem to be keeping his base from realizing that he actually hasn't done a fucking thing beyond threatening healthcare for millions of people.

Let's be clear, we're not laughing AT this story about how Mississippi GOP Sen. Thad Cochran is so old he can't remember where the Senate chamber is because that would be mean. But DDAAMMNN, this might explain why he loved sexxxing farm animals as a kid. Or not.

Gay people are pretty darn pissed off after Trump picked a gay hatin' Jesus freak who wishes he could eat every meal at Chick-fil-A to be a judge in Texas.

A federal judge has ruled that a Central American teenager has a right to an abortion, no matter what Jeff Sessions' Justice Department, or the the great state of Texas, think.

Arizona's resident conspiracy theorist for congress, DOCTOR Chemtrail Kelli Ward, lost her chief strategist and press secretary. Naturally, the Daily Caller took this in stride by incorrectly calling them campaign aides for Jeff Flake, despite the fact that they used to be "reporters" for Breitbart.

Trump is expected to nominate former Bush 43 alum Joseph Simons to chair the Federal Trade Commission. This has to come as a low blow to acting chair Maureen Ohlhausen, who has been campaigning so hard for the gig that she's stated she was inspired to do the job by reading "The Art of the Deal." LOLOLOLoyalty.

New ALLEGED Defense Department regs have put a hold on people with Green Cards from enlisting in the military. ALLEGEDLY.

The city of Beverly Hills wants to tear down Trump's YUGE shrubbery wall, but the Secret Service keeps saying, "Dude, this job sucks, don't make it even harder."

Spain doesn't give a fuck what Catalonia THINKS it wants, the central government is about to bring "constitutional order" to the region after Catalonia's president, Carles Puigdemont, declined to back away from their moves towards independence.

Schools in Italy are brainwashing their youths to spot fake news in an effort to combat Russian fuckery. Molto Bene!

The Kiwis have made a hard turn to the left after electing Jacinda Ardern as prime minister of New Zealand. She'll form a coalition government with the Green Party, but it's also an opening to remind people about flying dicks.

The "Russian version of Paris Hilton," a 35-year-old journalist, announced she will run for president against Vladimir Putin. This is going to get ugly.

An infamous dark web thief was doxxed in a Reddit thread, and now the spooky parts of the Internet are going nuts.

FCC Chairman Ajit Pai has decided not to do anything about Trump's threats to pull broadcast licenses from teevee networks that say mean things about him. This is the nicest thing we'll probably ever say about Ajit Pai.

Silicon Valley lobbyists are SUPER DUPER mad that John McCain has teamed up with Democrats to force Facebook, Google and Twitter to disclose who exactly is paying for political ads in rubles.

Despite all the warnings, there was a smarmy Russian troll Twitter account posting pro-Trump crap, and that has Jack Posobiec beside himself with butthurt after realizing he is A Idiot.

People are sexualizing one of the kids from Stranger Things and it's fucking gross. The sexualization of minors is not only criminal, it's wrong. It doesn't matter if it's a celebrity, and it's not magically better if it's a woman doing it to a boy. Check yourself, sexual assault and rape is not funny.

Nixonian ratfucker and and former Trump aide Roger Stone published a column ALLEGING that Wisconsin Gov. Scott Walker rigged elections with Reince Pribus, before then accusing Hillary Clinton of arming "Isis" [sic] and then trying to jump on the Bernie bus.

Some Trumper was unhappy that Forbes called Donald Trump poor, so they left a mean voice mail letting Forbes know how "very intelligent, [and] very handsome" he is, and how high his IQ is, and how he totally doesn't hate anyone (except people who are black, Messicans, gay, women, poor, etc).

Watch and giggle with us as Alex Jones loses his shit after hearing about drag queens reading books to kids. There's something about 400-pound goblin demons, baby giraffes, and space aliens.

After Bill O'Reilly tried to talk some shit about Jake Tapper's ratings, Tapper took the gloves off and tweeted, "Low" would be sexually harassing staffers and then getting fired for it -- humiliated in front of the world. DAMN! Jake Tapper with the LOW BLOW!

Trump takes a lot of pride in his fake-as-fuck Renoir and refuses to believe that the REAL "Two Sisters (On The Terrace)" actually hangs in the Art Institute of Chicago.

And here's your late night wrap-up! The Daily Show has Michelle Wolf to solve the Weinstein problem;Jordan Klepper is warning against Amazon; Jim Jefferies had some talky time with Rep. Ted Lieu.