Jeff Sessions Would Do Anything For Trump's Love, But He Won't Do THAT 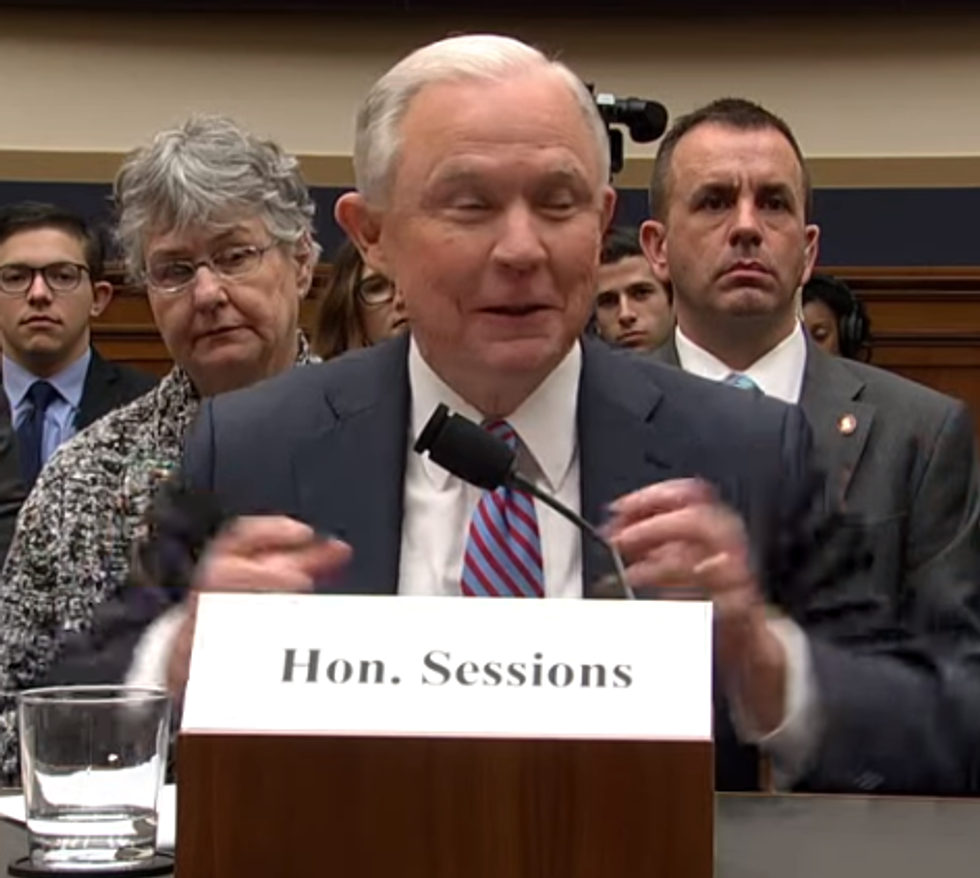 BREAKING DRIP DRIP DRIP NEWS for the "Donald Trump Can't Stop Obstructing Justice In The Russia Investigation" file Robert Mueller has been compiling. The failing New York Timesreports that, on top of Trump constantly yelling at and berating Jeff Sessions, and threatening to fire Jeff Sessions for following longstanding DOJ policy and recusing himself from the Russia investigation, Trump also personally inveighed upon Sessions last year, during one of his little getaways at Mar-a-Lago, to please un-recuse himself, so that he could shut down the Russia investigation. We know the conventional wisdom is that DOJ guidelines say you can't indict a sitting president, but Jesus Christ, COME ON, this is getting ridiculous.

We are in love with how NYT sets it up like a lovers' quarrel between two crusty senior citizens, one of whom is a leprechaun and the other of whom is a piece of tangerine-colored shit:

By the time Attorney General Jeff Sessions arrived at President Trump’s Mar-a-Lago resort for dinner one Saturday evening in March 2017, he had been receiving the presidential silent treatment for two days.

You can't just give him the silent treatment forever, Donald! Not after everything you've been through together!

So Jeff Sessions knew how to fix it. He would get on a plane, and he would go to Mar-a-Lago, and he would stand outside with a boombox like a common John Cusack, and then after that he would write "10 Things I Hate About Donald Trump" on his Trapper Keeper, but spoiler, it would really be 10 things he LOVES about Donald Trump. Maybe that would get Trump to stop doing the silent treatment to him?

When they met, Mr. Trump was ready to talk — but not about the travel ban. His grievance was with Mr. Sessions: The president objected to his decision to recuse himselffrom the Russia investigation. Mr. Trump, who had told aides that he needed a loyalist overseeing the inquiry, berated Mr. Sessions and told him he should reverse his decision, an unusual and potentially inappropriate request.

Jeff Sessions will do anything for love, but he won't do THAT.

So that was in March 2017. Trump screamed at Sessions all summer, and even almost accepted Sessions's resignation, because the attorney general's recusal was such a deep betrayal, and he couldn't get it out of his mind. Like come on, relationships between presidents and attorneys general can weather a lot of trials and tribulations, but RECUSALS? Why, Sessions might as well have had a romantic weekend with the Deep State and sexted Trump naughty pictures of it! How can they ever regain trust?

Rudy Giuliani says it was cool for Donald Trump to do this, because in Rudy Giuliani's squirrel brain, Donald Trump can do no wrong. He could shoot a puppy in the middle of 5th Avenue, right after he shot the puppy's owner IN FRONT OF THE PUPPY, and Giuliani would be there to 'splain why that is well within the president's authority:

“‘Unrecuse’ doesn’t say, ‘Bury the investigation.’ It says on the face of it: Take responsibility for it and handle it correctly,” Mr. Giuliani said on Tuesday evening.

And now that NYT is reporting on this, it's just re-opening old wounds for the president:

Rep.Trey Gowdy, “I don’t think so, I think what the President is doing is expressing frustration that Attorney General Sessions should have shared these reasons for recusal before he took the job, not afterward. If I were the President and I picked someone to be the country’s....

....chief law enforcement officer, and they told me later, ‘oh by the way I’m not going to be able to participate in the most important case in the office, I would be frustrated too...and that’s how I read that - Senator Sessions, why didn’t you tell me before I picked you.....

....There are lots of really good lawyers in the country, he could have picked somebody else!” And I wish I did!

At press time, Donald Trump was sitting naked on his bed with a guitar changing the words of Alanis Morissette's "You Oughta Know" to make them about Jeff Sessions. Because for real, would the Deep State really go down on Jeff Sessions in a theater, the way Trump would? (Allegedly.)

Donald Trump is pretty sure the Deep State WOULDN'T.