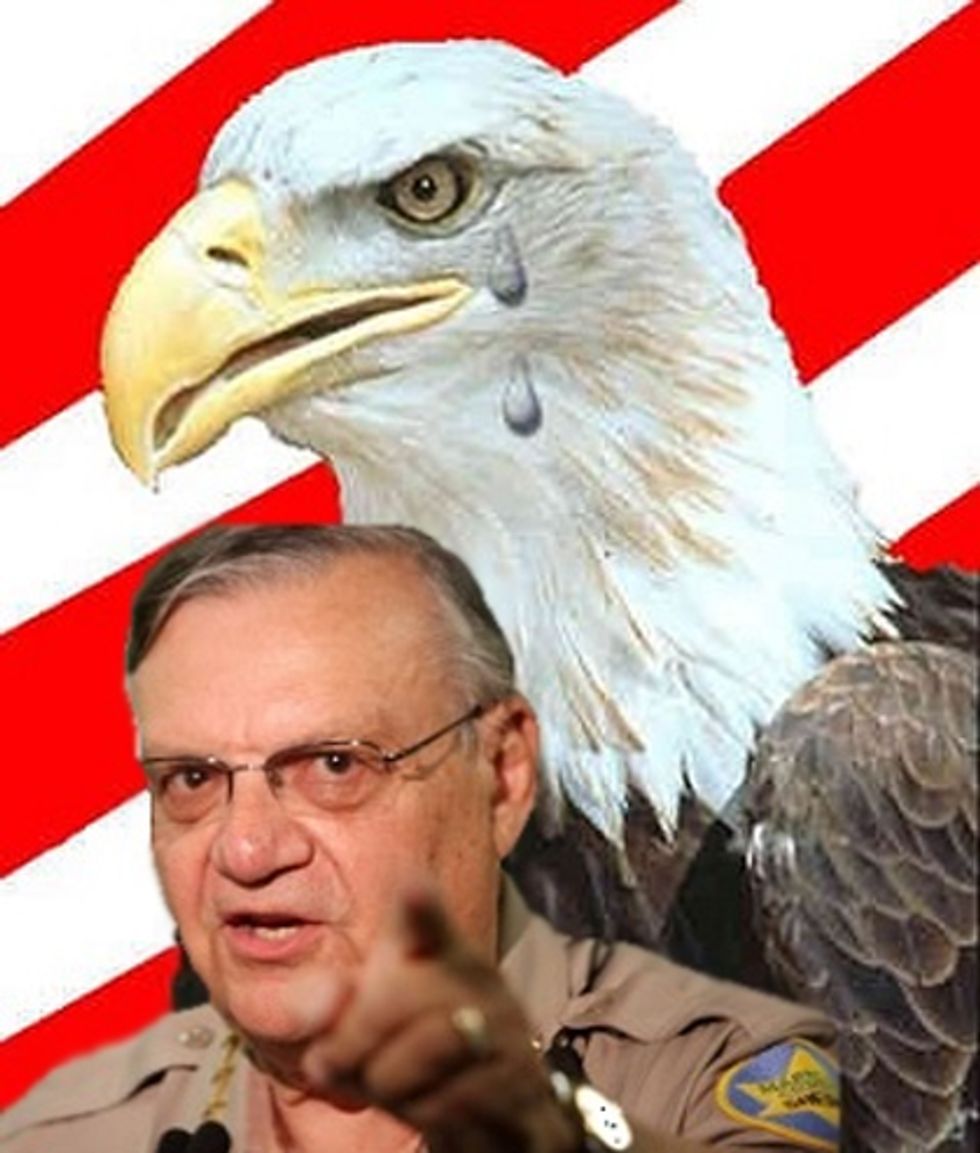 Who weeps for Joe Arpaio?

Former Maricopa County Sheriff Joe Arpaio's career as a self-promoting rightwing stain on the justice system came to an ignominious end today as he was convicted on federal charges of criminal contempt of court. Arpaio had been charged with contempt for refusing to follow a federal judge's 2013 order to stop racially profiling Latinos as part of his personal crusade against illegal immigration. The conviction is a fitting coda to the end of Arpaio's formal career as Maricopa County Sheriff; he was whupped soundly in last fall's election by retired Phoenix Police sergeant Paul Penzone, whose chief qualitication for office was being Not Joe Arpaio.

The sentencing portion of the trial will begin October 5; at most, the former sheriff faces 6 months in prison on the misdemeanor charge. Arpaio was tried before U.S. District Judge Susan Bolton over five days in late June and early July. After Bolton delivered her verdict, Arpaio issued a statement saying he will appeal. Bolton didn't buy Arpaio's defense that the 2013 order was unclear and that he didn't really intend to discriminate or anything while his deputies kept arresting people who really, really looked like illegal immigrants to them. And besides, if they did all that now, they could be White House Chief of Staff.

"The evidence at trial proves beyond a reasonable doubt and the Court finds that Judge (G. Murray) Snow issued a clear and definite order enjoining Defendant from detaining persons for further investigation without reasonable suspicion that a crime has been or is being committed; that Defendant knew of the order; and that Defendant willfully violated the order by failing to do anything to ensure his subordinates’ compliance and by directing them to continue to detain persons for whom no criminal charges could be filed," Bolton wrote in the ruling. "Because the Court finds that Defendant willfully violated an order of the court, it finds Defendant guilty of criminal contempt."

Get ready now for outraged wingnuts to declare Joe Arpaio a martyr on the altar of Political Correctness since all he did was to try and protect America from scary immigrant hordes. When Arpaio's department was running its profiling operations, sheriffs performed traffic stops of Latinos to check their immigration status as well as "sweeps" of businesses and Hispanic neighborhoods. Arpaio was so fixated on the immigration raids that sheriff's department resources were diverted from actual law enforcement, leading to slower response times and no investigation at all of some crimes, including multiple sexual assaults.

Many of those taken into custody were not accused of violating a state crime, but only of living in the country illegally. Once they were detained, deputies would turn over the individuals to Immigrations and Customs Enforcement or Border Patrol officials, who would initiate deportation proceedings.

Couldn't happen to a nicer guy.

Arpaio was sued by the American Civil Liberties Union for violating the arrestees' rights; the contempt charges grew from Arpaio's department continuing to perform immigration-related arrests even after Judge Snow had made it clear that immigration enforcement is the federal government's job, yes, really, even if you have a reputation and trademark as "America's Toughest Sheriff." After finding Arpaio and three aides guilty of civil contempt last year, Judge Snow added a charge of criminal contempt, which involves deliberately, not inadvertently, ignoring the court order.

Arpaio did his own part to provide evidence against himself with several media clips of the former sheriff insisting that he would enforce the law as he saw fit, including video of Arpaio telling a Maricopa County Jail inmate, "Nobody is higher than me. I am the elected sheriff by the people. I don’t serve any governor or the president.”

It's not yet clear whether Arpaio intends to argue that his conviction be vacated because the flag in the courtroom had gold fringe on it, or because he is a free man, not the corporate entity called "Joe Arpaio" by the illegitimate federal government.

Yr Wonkette is supported by reader donations, please click the "Donate" linky below! No gold or BitCoin, please.