Jerry Brown Will Drown All Your Children 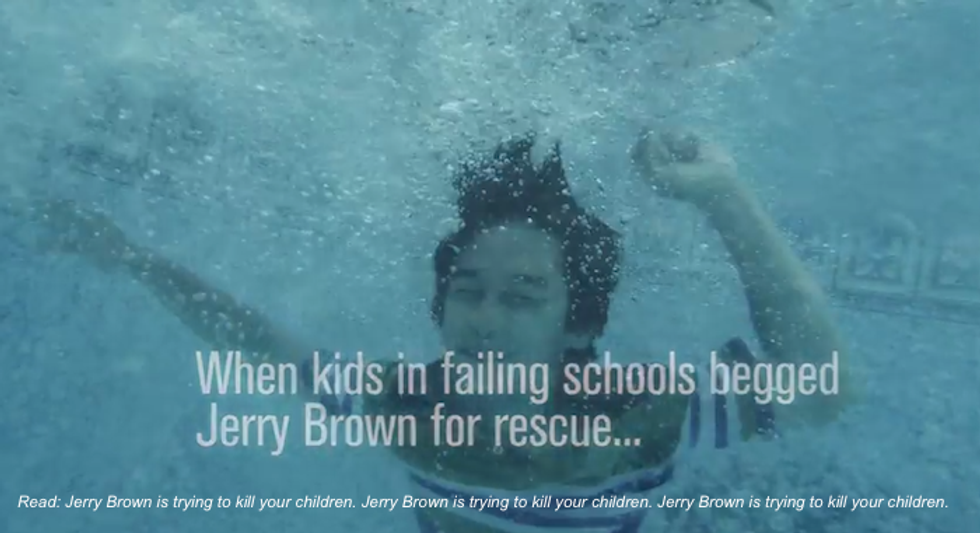 Because it is exactly three weeks to Election Day, it is also the time for desperate candidates who are going to be very sad on Election Day night to whip out the Hail Mary ads because why not?

Clearly overcome with the Because Why Not? spirit, Republican millionaire -- his nickname is The $700 Billion Man, from his days at the U.S. Treasury when he helped bail out all those too-big-to fail banks in 2008 -- Neel Kashkari is going all in in his race against California Gov. Jerry Brown, who is, and has been, beating him so hard in the polls, his new nickname should be Flatline Neel. You'd almost feel sorry for poor Neel except that he is not poor, and he's kind of a schmuck. Actually, given his new ad, we are changing his rating to Definitely A Schmuck.

This ad is so very nuanced that we're not entirely sure what the message is, but we think Kashkari is subtly suggesting JERRY BROWN IS DROWNING YOUR CHILDREN AND ONLY NEEL WILL RESCUE THEM BEFORE THEY DIE!!!!!!!!

We think. Hard to say because of how subtle it is.

We can't say it's the absolute worst political ad we've ever seen, but that's because there are just so many to choose from. Like Minnesota's Jeff Wagner, who was pretty sure the best way to convince the people of Minneapolis to elect him mayor was to emerge from a lake with a coffee cup, which was just plain weird. Although not nearly as weird as Carly Fiorina's forever infamous Demon Sheep ad, which probably wins the Weirdest Political Ad EVER! Award, forever. Which didn't stop Texas Lieutenant Gov. David Dewhurst from trying to top it this year with a "parody" of a song from some popular kids' movie called Frozen.

There was the sad attempt to be elected California senator from expert conspiracy theorist and realtor Orly Taitz DDS Esq., and yet somehow Sen. Dianne Feinstein managed to beat her anyway. Then there was Newt Gingrich in 2012, telling all the Mexican Hispanic Latino brown whatevers how grateful they should be that Newt was going to save them from Obama and also because America, you're welcome, and thanks, Newt Presidente.

In 2012, Mark Oxner, Republican congressional candidate from Florida, ran what might well be the weirdest AND most offensive ad, in which President Obama is the captain of a cartoon slave ship, there's a couple in matching bathtubs like a Viagra ad, and all the children have to row row row to pay for Obama's tax cuts. It is ... it is quite something. Watch it. We are not making this up.

We also remember an ad from former Alaska Sen. Mike Gravel, who ran for president in 2008, and made PROLONGED EYE CONTACT with the camera, then skipped a rock across a lake, which would have been weirder if he'd emerged from the lake with a coffee cup, obviously. In comparison, that ad barely even counts as weird. It's sort of soothing, really.

So we are not sure exactly where to rank Kashkari's SUPER SUBTLE ad in the entire weird and/or offensive political ad spectrum. But here's something a little less subtle:

Too bad Neel doesn't have a big strong rich Republican to pull him from the deep end, huh?