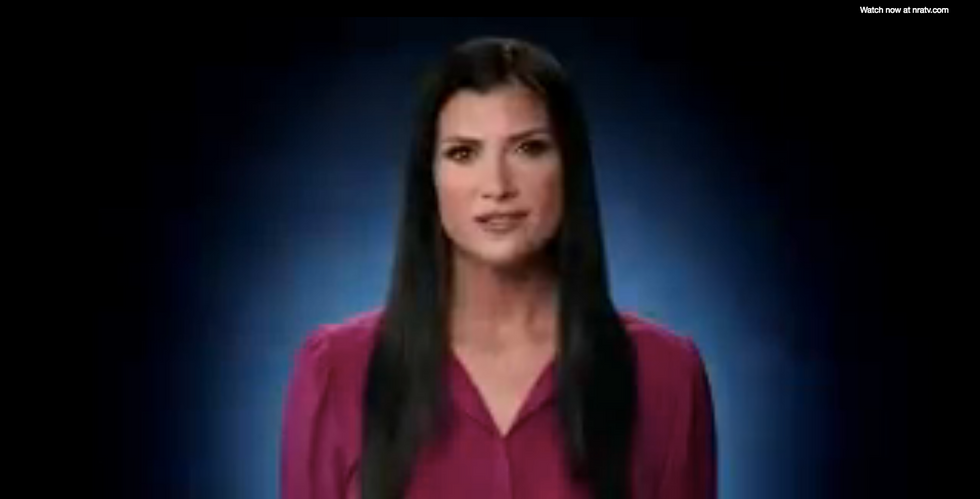 On Friday, the NRA released another one of Dana Loesch's charming video missives, and perhaps the most ridiculous one so far. If you have not seen it, pretty much nothing I can say will prepare you for the experience.

“We are witnesses to the most ruthless attack on a president & the people who voted for him...in American history." -@DLoesch#NRApic.twitter.com/rcPAKMVJI0

“We are witnesses to the most ruthless attack on a president and the people who voted for him, and the free system that allowed it to happen, in American history," she begins.

I will leave this here.

This, of course, is not even the most dramatic part. What any of this has to do with guns, I'm not even sure. The only weapon she even mentioned were the daggers that we are apparently driving through the heart of Dana Loesch's future? Also that we are "poisoning" their belief that "honest custody of our institutions will ever again be possible" so we can build a utopia? But really Dana Loesch is going to make sure we perish in the flames?

There are a whole lot of mixed metaphors here! We're stabbing, we're poisoning, we're perishing in flames. Clearly, we are the disorganized serial killer of AMERICA.

She just kept repeating that FEMINISM IS DEAD, as if saying it enough times could make it so. She then went on a Twitter rant about how feminists don't even care that she has to move because she is receiving threats from people who believe in gun control and want to shoot her because of it? To be fair to us, I think it's probably more that feminists didn't know she was receiving threats because we don't have access to her Gmail and are not psychic? And also because the only time we pay attention to her is when someone is like "Hey! Did you see that freaky shit Dana Loesch was saying?"

But, after declaring feminism dead, Loesch very much wanted to know why all the (zombie?) feminists never come to her defense.

Though why she thinks she would need our defense, I cannot imagine! Especially since she's been going around hollering "What rights do men have that women do not have?" forever. If feminism is dead, and equality is 100% achieved, then how on earth can Dana Loesch feel she is experiencing sexism? IT IS A PARADOX!

Dana is just so, so confused. I don't think she even knows what she is mad at, at this point. She is just mad at all the things and Loesching out in every direction. Frankly, my suggestion--as a feminist--is that Loesch go down to Lush, get a nice bath bomb and take some time for quiet reflection and self-care and get her thoughts together before the next time she decides to step into that NRATV studio and make a video.

Help fund the utopia we are trying to bring about by being mean to Donald Trump! Donate to Wonkette!