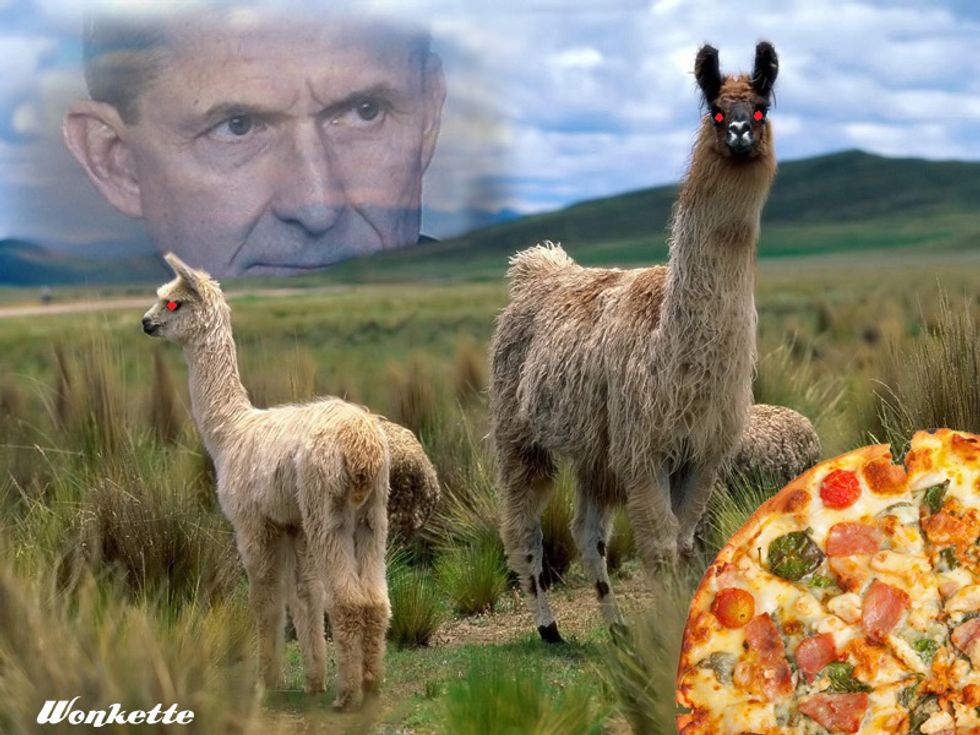 Dear Wonkers: We like to think we're fairly imaginative writers here at Yr Wonkette. We come up with some pretty silly stuff about which to make our little news-related japes. But we must confess: There's virtually no way we'd have dreamed of spinning out a scenario about the real reason Gen. Mike Flynn got shitcanned by the Trump administration that could possibly equal the sheer creative insanity of fundagelical radio preacher Rick Wiles, who explained Tuesday that Flynn was forced to resign by a cabal of demon-possessed child molesters, led by Hillary Clinton and John Podesta, working out of a Washington DC pizzeria. Yes, kids, according to this great prophet, Mike Flynn was brought low by Satan Himself because Flynn dared to speak the truth about #Pizzagate.

What's Hillary up to? Oh, just screwing with Trump and Mike Flynn on Twitter.

You see, not only is Wiles quite certain #Pizzagate is real, he also knows Hillary Clinton and aide Rhillippe Reines's tweets making fun of Flynn and suggesting he look for work at Domino's were not jokes! They were in fact an acknowledgement that the conspiracy is real, and now Hillary is gloating that she and her cabal of "devil-worshiping, Luciferian, demon-possessed maniacs" have defeated Mike Flynn. You betcha!

As you'll recall, Hillz and Phillz had tweeted:

Jokes? There are no jokes in Rick Wiles's demon-haunted world, where, as Wiles explained to Jim Bakker in 2015, Satanists also run secret demon-worshiping baby murder temples at Planned Parenthood, where they literally are invited in to help with abortions so they can use aborted babies in Satanic rituals. That's the one where Wiles exclaimed of these Planned Parenthood Satanists, "They're natal Nazis!" which we still need to get on a coffee mug, probably.

So of course Hillary Clinton is bragging about the success of her coven in bringing down Mike Flynn, a good Christian general who simply thinks it makes perfect sense to be afraid of all Muslims:

Hillary Clinton is telling up front what this is all about, guys. She's telling us [...] She’s bragging it’s about Pizzagate. She’s telling them, "We took you down, you dared to talk about our filthy child molestation ring and we took you down." That’s what she’s saying.

Uh, guys? This could be a problem.

See? And you thought maybe Flynn's weirdo son was forced out of the Trump transition team because his obsession with conspiracy theories was embarrassing and distracting. That's what Hillary and her minions want you to believe!

This is about Gen. Flynn and others who are aware that there is a criminal cabal running this nation and much of the world. And I don't know whether Gen. Flynn comprehends that they are devil-worshiping, Luciferian, demon-possessed maniacs, but he does know they're child molesters. He does know that they're criminals, that they're involved in child trafficking, child molestation, child rape, child murder. He knows it. He knows it! You can't be in that position of power and not have information about these people.

Obviously! Which is why all the real news comes out on Twitter and the Alex Jones show, at least until Jones takes it down after some nut goes and shoots up a pizza place. Exposing the truth ain't easy, and the Luciferian demon-possessed maniacs are all over the place, many of them engaged in psychological warfare by calling highly-placed insiders like Mike Flynn and Rick Wiles complete kooks, muahahaha.

Wiles went on to predict that when the real truth about all this finally comes out, the nation will be shocked -- since clearly it's being suppressed now, what with people openly dismissing it on the interwebs and pointing out inconvenient details like the complete lack of any evidence of missing children, victims who've survived, forensic evidence, or anything more than some internet loons decoding pizza menus. But once the TRUTH is finally known, he says,

there will be mass vomiting in the society when people find out what these demon-possessed rulers have been doing for decades with children, the children who are kidnapped and disappear.

Why no rash of missing persons reports in Washington? Simple! The children are being disappeared from "third-world nations" and brought to the nonexistent dungeons under Comet Ping Pong, which doesn't actually have a basement, but only if you believe the media and not Rick Wiles, who added that "Christians don't even understand that for years they've been voting for child molesters. They've been voting for devil-worshiping, Luciferian, demon-possessed men and women."

He doesn't mean everyone in politics, of course, probably just the Democrats, because we totally remember the fight over the "Luciferian demon-possession, child molestation, flag-burning, and capital gains tax increase" plank of the 1988 platform. But LOTS of world leaders have somehow managed to hide all the evidence:

Many of the key officials, elected and appointed, and in corporate board rooms and in Hollywood and in New York City, they are part of a global child molestation ring. And this must be dealt with. This is the dark cancer that's killing the country.

Weirdly, while the Clinton-Podesta Satanist ring has forced Mike Flynn out of a job, his first act after resigning was not to rush to Fox News and spill the beans about the cabal. Maybe because he fears for his life! And Rick Wiles, who knows all this, is still walking around free, completely untouched by the nefarious, world-ruling plot, probably thanks to your generous love offerings, which have kept him safe under the Shield of the Lord.

Guy ought to try writing political dick jokes. We bet he could come up with some whoppers.

You know who never gives Yr Wonkette any money to keep us ad-free? Rick Wiles. And neither does SATAN! Think about that connection while you send us money, won't you? Thanks loads -- with extra cheese!