Jesus Pals Disagree On Which Whores To Stone, Just Kidding No They Don't 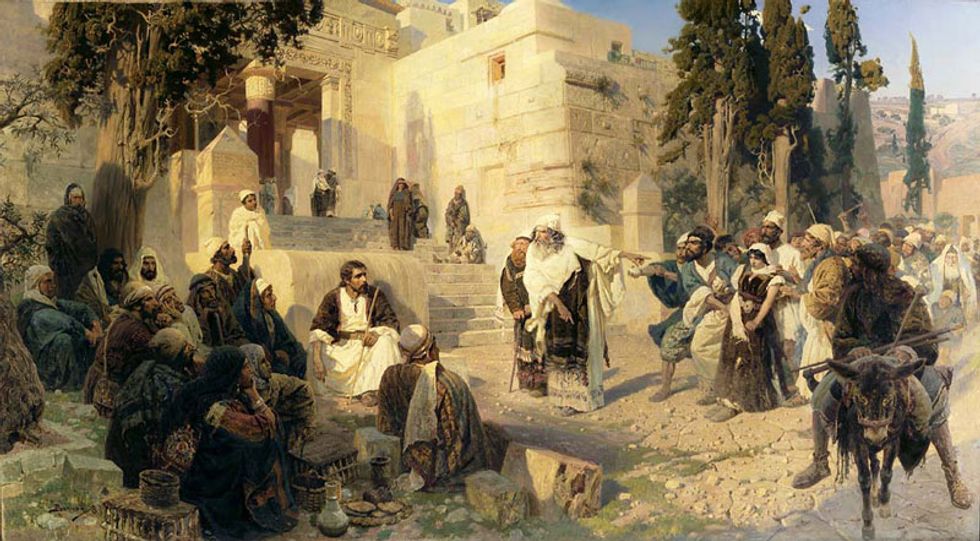 Everybody Must Get Stoned

Donald Trump's suggestion last week that of course there have to be criminal penalties for women who have abortions -- even after he tried to walk it back -- has caused no small amount of consternation among the Religious Right. For one thing, he had to go and spill the beans by saying the thing they don't want to say publicly: criminalizing abortion will make women criminals. But for some reason, when they put it like that, suddenly their "pro life" position seems a whole lot less appealing to people who don't quite buy the assertion that abortion is literally murder. Once Trump walked back to the more respectable position -- we'll only put doctors in jail -- many fundies clucked approvingly and went back to pretending they didn't want to turn roughly a third of women into jailbirds. Just their doctors, who might as well be charged with first degree murder.

But other fundies figured they had to Biblesplain things a little further, like poor old Pat Robertson, who seemed downright uncomfortable having to confront what passes for the logic of the "pro-life" stance, especially since Trump had to go and state it so openly:

You know, it’s interesting, what Trump says, it shocks people, but at the same time the old adage was that abortion is illegal, that it was murder, and consequently if it’s illegal and it’s murder then there had to be some penalty attached to it.

You can almost hear the gears grinding as Robertson realizes the "abortion = murder = execute the woman who killed her babby" position simply doesn't have the support it should have, what with people being reluctant to send quite that many ladies to the lethal injection gurney. So maybe it would be more acceptable to only treat the clinician as the real bad guy:

That's why it was so very, very hard to get any kind of legislation against this sort of thing. And now they say it should punish the provider who does the abortion, not the woman who is having it, which sounds more reasonable. In any event, if somebody says abortion is murder, then what do you do to somebody who commits murder? It’s a dilemma that people have been wrestling with and I’m certainly not going to get into it. But that does seem a bit draconian, but at the same time we’ve slaughtered close to 50 million unborn babies in America since Roe v. Wade. It's been a slaughter that's been unprecedented, and these are innocent human beings that are being slaughtered, and we have the scandal of Planned Parenthood auctioning off or selling off the various body parts of unborn babies, I mean it makes you sick to your stomach. These are human beings!

But golly darn it, people simply don't seem to have the moral fortitude to actually follow through on the abortion is mass murder rhetoric, except for the crazies who actually go and murder some doctors in the belief that they're literally killing Dr. Mengele. But the official position of "pro-lifers" is that you can call it murder and genocide all you want, as long as you don't actually follow through and start killing people, because even if it makes God happy, it's bad optics for your fundraising. Thank goodness Robertson remembered to throw in yet another reference to the non-existent Planned Parenthood auctions of fetus parts on e-BayBee, or he might have accidentally blurted out "Stone the whores like the Bible says to!" People might think that seems "draconian" for some reason.

Other "pro-life" zealots had less trouble embracing Trump's original, unrevised opinion that women must be punished. Jay Sekulow, the chief counsel for a legal group founded by Robertson, the "American Center for Law and Justice," was perfectly open to putting some filthy hoors in jail, if not the execution chamber, once Roe v Wade is overturned. Addressing the federal ban on "partial birth abortions" on his radio show Thursday, Sekulow was quite happy to spin out the logic of declaring fetuses to be "persons" and making abortion illegal. After first noting that in the current wimpy political climate, the law only penalizes doctors who perform the procedure, Sekulow looked forward to at least the possibility that some women could start getting jailed for baby-murdering:

That’s a different question from whether you legally could have statutes, if Roe v. Wade was overturned, that criminalized the abortion activity, including anybody that voluntarily -- not coercion, not life of the mother, not rape or incest, because those would all be defenses -- but could a state say if a woman voluntarily had a partial-birth abortion that that act could be criminalized, could a state say that? Sure, a state could say that. And if you believe that the child’s a person, well, I’m not so sure that that’s contradictory. Politically, we've got a very consistent position on that; we always focus on the abortion provider, not the woman, but that's a different question than legally [...]

Legally, yeah, a state could say anyone involved in the process in committing a crime.

Sekulow's cohost, his son Jordan, popped in to add, "We’re talking hypotheticals here, I think it’s a long road until we get to that point where those kind of abortion laws would be potentially in place." But that doesn't mean it's not a bad idea to start building a good-sized pile of stones the minute President Cruz makes a few Supreme Court appointments.

As the conversation progressed, Sekulow lamented that all this focus on only punishing doctors really is a regrettable half-measure, and that if Americans really agreed that every fertilized egg is a human being, it would be a lot easier to start putting women in jail for having abortions, the way we really should:

Because if you really believe that the unborn child’s a person ... you would say, if somebody voluntarily did this for the purposes of birth control -- which is generally what it is, is an inconvenience, not medically necessary ... you think to yourself, if it’s really a person, what’s so, what’s so -- but we aren’t there yet politically and we’re not there maybe even legally or morally, and that may be shame on us in one sense.

We like that uncomfortable trailing off after "what's so..." It's almost as if he didn't want to finish that thought in public. Sekulow emphasized he's just spitballing here, because for now at least, the Christian Right has to "win hearts and minds" before the mass jailings of women (and presumably anyone involved in an abortion, like a parent or spouse who pays for one) can really get rolling. Ultimately, he admitted, that's where the logic really needs to go in the Republic of Gilead:

But the problem is, if you really logically look at this, the fact of the matter is, if it’s a person for goodness sake, and I believe it is, the rules would be different. For any other person that somebody killed, they’d be held culpable, either as the primary person or the accessory to the crime. So this is not, it’s not craziness what’s being said here

But again, he says, for the sake of politics, it's too soon to be too open about that, so just hush up, Mr. Trump.

Finally, Wingnut's Wingnut Bryan Fischer weighed in on the matter Thursday, explaining to a caller on his radio show that Donald Trump merely made a little mistake in speaking too soon, because right now, the official position of the "Pro Life" movement is that while doctors are brutal baby-killing murderers, women who have abortions are merely innocent victims who've been led astray by propaganda from evil feminists and progressives:

The problem, Fischer explains, is that right now our culture is so polluted by liberalism that haven't yet reached "the place where everybody understands that it's a baby," so for the time being, we have to focus on closing down clinics, punishing doctors, and making legal abortions harder to get. Then, in some glorious future age when everyone realizes fetuses are people, we can start talking about punishing women, too, because they'll finally know it's sinful, HOORAY! But right now, women who have abortions simply

do not realize how morally culpable they are for what happened until later, and then the reality of what they have done kind of crashes in on them and then it just devastates them when they realize what they've done. They didn't know better. Nobody told them, nobody tried to talk them out of it, nobody explained the humanity of the baby in the womb, so they did not know what they were doing.

Which would be a pretty effective critique, apart from being almost completely bogus, at least if you believe mere science, like the 2015 study which found only a tiny percentage of women were overwhelmed with guilt after an abortion:

According to a new study that tracked hundreds of women who had abortions, more than 95 percent of participants reported that ending a pregnancy was the right decision for them. Feelings of relief outweighed any negative emotions, even three years after the procedure.

Fischer can handwave that away, of course, since it merely proves that 95 percent of slutty baby-killing women have been brainwashed by secularism, and don't yet realize how terribly damaged they should feel, the poor dumb things. In any case, that kind of thinking will be gone just as soon as everyone in America gets right with God and bans abortion, after which we can get on with the serious business of punishing women the way they deserve. For now, you know it's a pretty weird crowd when Bryan Fischer is the guy who sounds most compassionate on whether women should be punished for abortions -- for now.