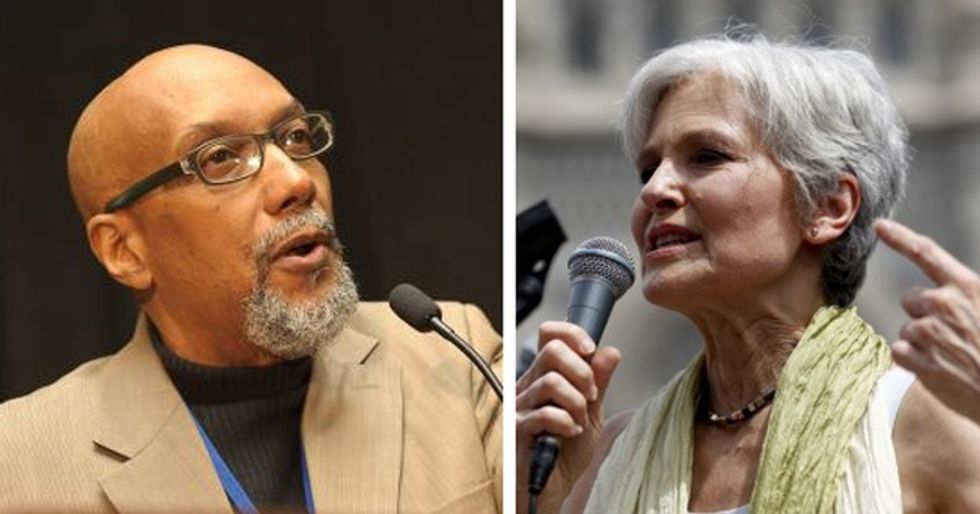 Some terrific news for die-hard Bernie-or-bust folks who simply can't bring themselves to vote for that warmonger Hillary Clinton, and are instead supporting the genuine leftist alternative, Green Party candidate Jill Stein: Stein this week announced that her running mate would be human rights activist Ajamu Baraka, who is so very left that he considers Bernie Sanders an imperialist tool and a borderline racist. As Fusion notes, Baraka has an impressive record as an activist:

Before hitching his political horse to Stein’s wagon, Baraka made a name for himself serving on boards for Amnesty International, coordinating the Black Left Unity Network’s Committee on International Affairs, and serving as the executive director of the U.S. Human Rights Network.

And he also has a personal blog where he looks at the world from a decidedly radical view, in which, for instance, Syrian leader Bashar al Assad is a pretty decent guy who was reelected by big margins, and no, he's not engaged in any war crimes against his people; the only war crimes are being perpetrated by western imperialists and their pawns in the Syrian opposition, and ISIS, which was originally another tool of western imperialism that took things into its own jihadist hands. In Baraka's world, Barack Obama is the worst sort of sellout, a representative of "the black petit-bourgeoisie who have become the living embodiments of the partial success of the state’s attempt to colonize the consciousness of Africans/black people."

As for Bernie Sanders and his supporters, Baraka only mentions them a few times in his blog, mostly as sadly disappointing liberal squishes. Sanders gets a brief mention in an essay decrying Beyonce's Super Bowl performance as a "commodified caricature of black opposition" in which "the imagery and symbols of authentic black radicalism [were] grotesquely transformed into a de-politicized spectacle by gyrating, light-skinned booty-short-clad sisters." Baraka dismisses Sanders as a mere distraction from the real work of radically transforming the world:

In this period of media-driven pseudo-opposition in the form of Ta-Nehisi Coates, Beyoncé or even Bernie Sanders, it is increasingly difficult to make the distinction between image and reality, especially when the production of images and symbols is controlled by dominant forces with an interest in keeping us all stupid.

In other pieces, Baraka implicates Bernie Sanders supporters in western indifference toward victims of our "allies" in the Middle East, especially in Saudi Arabia's air raids supporting what's left of the government of Yemen in its civil war against Houthi rebels (who are murderous bastards in their own right, too).

In short, said Baraka in the September 2015 piece, a President Bernie Sanders would simply be yet another imperialist warmonger who'd support "continued war crimes from the sky with drone strikes and Saudi led terror in support of the Western imperial project." And his supporters are -- at best -- willfully blind to Sanders's own racist warmongering:

In their desperate attempt to defend Sanders and paint his critics as dogmatists and purists, the Sanders supporters have not only fallen into the ideological trap of a form of narrow “left” nativism, but also the white supremacist ethical contradiction that reinforces racist cynicism in which some lives are disposable for the greater good of the West.

And as much as the ‘Sandernistas’ attempt to disarticulate Sanders “progressive” domestic policies from his documented support for empire (even the Obamaite aphorism “The perfect is the enemy of the good” is unashamedly deployed), it should be obvious that his campaign is an ideological prop -- albeit from a center/left position -- of the logic and interests of the capitalist-imperialist settler state.

Sorry, Bernie-or-Busters: you're a bunch of imperialist dupes and (at least since Bernie Sanders and his popular surrogate Nina Turner both turned her down) Jill Stein didn't really want your votes anyway.

Update: Alert Wonkette Operative "C-L" advises us that the URLs for the linked blog pieces were all borked when Ajamu Baraka updated the front page of his website; we have updated this article with corrected links. He didn't delete anything as far as we can tell, just moved them to new locations on his site, rendering all the old URLS inoperative.

[Fusion / A Voice From The Margins]