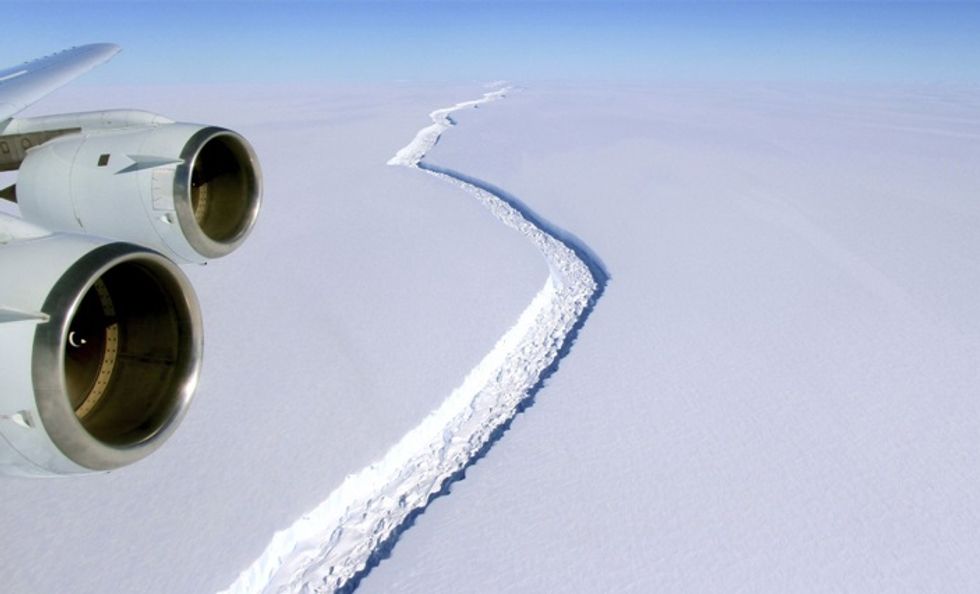 The crack in February. Big, huh? (Image by NASA)

Scientists announced yesterday that an enormous chunk of the Larsen C ice shelf in Antarctica roughly the size of Delaware has broken off from the rest of the ice sheet, becoming one of the largest icebergs in recorded history. It's over 2,200 square miles in area, weighs a trillion tons, and has a volume double that of Lake Erie, if you want some other "How Goddamn Big Is This" measures. One more comparison: it "consists of almost four times as much ice as the fast melting ice sheet of Greenland loses in a year," according to the Washington Post.

We're talking big. Like, probably too big for global warming-denying Senator Jim Inhofe to drag onto the Senate floor like he did with that snowball.

If this one berg, to be named "A68," were to melt all at once (which it won't, thank Boreas), it would raise the global sea level by almost 3 millimeters worldwide. As things stand, it won't have any immediate effect since the ice shelf was already floating. And hey, while climate scientists virtually all agree that global warming is causing glaciers to melt and polar ice to thin, the usual cautious statements from scientists have led climate change deniers to proclaim that this iceberg is definitely unrelated to global warming, which is a hoax. That has to really frost the scientists at Project MIDAS, based at Swansea University and Aberystwyth University in Wales, which made the announcement Wednesday, where the "about" page says pretty damn clearly that MIDAS is about

Let's see what those funtimes science deniers at PJ Media say in their story about this:

The PJ Media story links to, and selectively quotes from, an AP story about the announcement which doesn't say scientists "admit" any such thing. As with most phenomena, it's difficult to pin a particular event to a single cause, as the AP piece makes clear:

Scientists say global warming has caused a thinning of such shelves, but they differ on whether the latest event can be blamed on climate change.

That's perfectly accurate, but it's a far cry from scientists confessing that global warming is a hoax. But by golly, the folks at PJ Media try to spin it that way. Their version:

Swansea glaciologist Martin O'Leary emphasized that this was a natural event, not caused by man-made climate change. Even so, the event "puts the ice shelf in a very vulnerable position."

The AP's version puts O'Leary in dialogue with another scientist:

Eric Rignot, a glaciologist at the University of California, Irvine, said the breaking off of the iceberg "is part of a long-term major loss of the ice shelves in the peninsula, progressing southbound and resulting from climate warming."

But Swansea University glaciologist Martin O'Leary, a member of the MIDAS project, called it "a natural event, and we're not aware of any link to human-induced climate change."

And a spokeswoman for the British Antarctic survey said there's not enough information to say whether the calving is an effect of climate change, though there's good evidence global warming has caused thinning of the ice shelf.

Obviously, "not enough information" means "It's a hoax by socialists." The New York Times and the Washington Post offer more nuanced discussions of what's at work here. Yes, icebergs, sometimes huge ones, have always calved off the Antarctic sea ice shelves, which are fed by glaciers moving down the continent. But while scientists who study the Antarctic ice may disagree about whether this particular iceberg's breakaway was hastened by climate change, not one of them says global warming isn't happening.

MIDAS's lead researcher, Swansea University glaciologist Adrian Luckman, wrote a fine piece Wednesday explaining why he believes any link between the calving of the Larsen C iceberg and climate change is "far from straightforward." But Luckman also takes global warming as a given, noting that

In a warming world, ice shelves are of particular scientific interest because they are susceptible both to atmospheric warming from above and ocean warming from below.

So yes, even though this particular iceberg may only be indirectly related to global warming, none of the scientists studying it thinks global warming is no biggie. And while the iceberg itself won't have any effect on sea level, the loss of all that mass from the Larsen C ice shelf could lead to the eventual breakup of the entire  shelf, much like the breakup of the Larsen A and Larsen B ice shelves in 1995 and 2002. It's not yet clear how unstable the ice shelf may be, or whether if it is, a breakup would be years or decades away. But the collapse of the Larsen C ice shelf would have a slow-motion effect like a dam breaking -- with less ice holding them back, Antarctic glaciers will move more quickly to the sea, dropping more ice in and contributing to sea level rise. And yes, even if that happens you'll hear wingnuts insisting it's impossible for humans to change the climate.

Even so, it's important to put all this in perspective: It has no bearing on Hillary Clinton's emails.

Yr Wonkette is supported by reader donations. Please click the "Donate" clicky! And to reduce your carbon footprint, look into greening up your own energy usage with a wind or solar energy plan from our partners at Arcadia Energy. Wonkette even gets a cut!