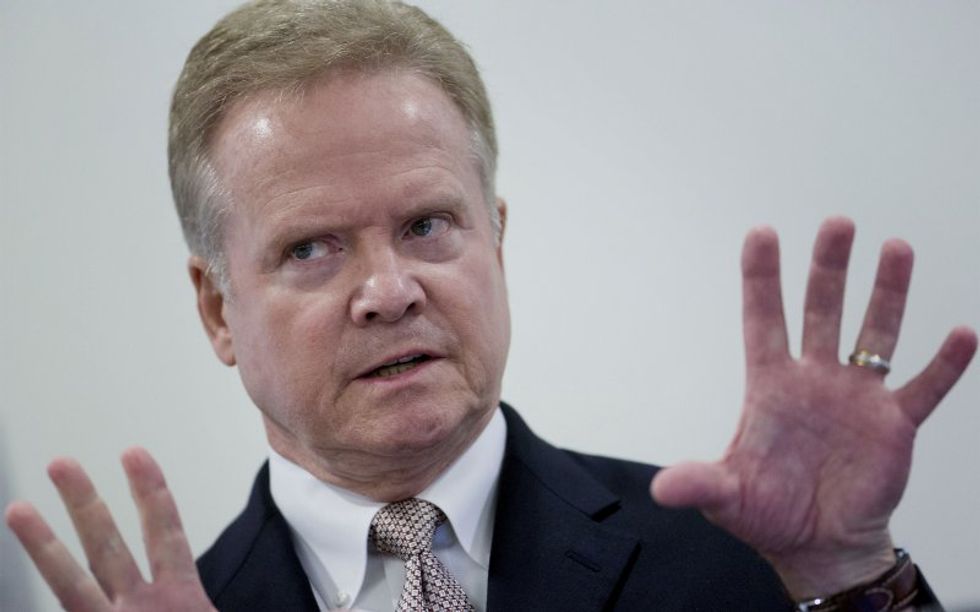 Dead-eyed failed "Democratic" presidential candidate Jim Webb, who killed a guy one time, is very upset about the way kids today are treading all over President Andrew Jackson, just because he genocided a bunch of Native Americans one time.

In a treacly love letter to our Seventh President in the Washington Post, Webb ponders aloud why people can't just say that Harriet Tubman was good without mentioning that Andrew Jackson was kind of a jackass, and expresses his disdain for the way "political correctness" has "invaded our educational system."

"One would think," he writes, "we could celebrate the recognition that Harriet Tubman will be given on future $20 bills without demeaning former president Andrew Jackson as a 'monster,' as a recent Huffington Post headline did. And summarizing his legendary tenure as being 'known primarily for a brutal genocidal campaign against native Americans,' as reported in The Post, offers an indication of how far political correctness has invaded our educational system and skewed our national consciousness."

Yes. Either that or people who were taught in school to see significant historical figures and former presidents as saintly figures were disappointed to discover that they'd been lied to throughout their young lives, and now have little interest in continuing that charade. Thus, the pendulum has swung over and they are now pushing the evil "politically correct" agenda of teaching "actually correct" facts. How ghastly!

Next thing you know, they'll stop referring to the Civil War as the War of Northern Aggression! Or teaching children history so that they can learn from past mistakes, rather than teaching it for the specific purpose of inspiring the kind of "patriotism" that makes them more willing to die for their country in the event that we decide we need more oil at some point in the future.

This tendency towards "political correctness" is a slippery, slippery slope, Webb warns.

"This dismissive characterization of one of our great presidents is not occurring in a vacuum. Any white person whose ancestral relations trace to the American South now risks being characterized as having roots based on bigotry and undeserved privilege. Meanwhile, race relations are at their worst point in decades."

Quelle horreur! Certainly, no one in their right mind would suggest that! I mean, just because they were white people who owned human beings as slaves doesn't mean they had "undeserved" privileges. Maybe they deserved to have slaves! Did you ever think of that? Clearly, Jim Webb has.

Plus, think of how much "race relations" could improve if black people would just stop suggesting that maybe centuries of institutional racism has maybe given white people a bit of a leg up, or annoyingly pointing out that institutional racism still exists, or you know, getting all mad just because a white cop shoots and kills an unarmed black man who wasn't actually doing anything illegal?

"Far too many of our most important discussions are being debated emotionally, without full regard for historical facts. The myth of universal white privilege and universal disadvantage among racial minorities has become a mantra, even though white and minority cultures alike vary greatly in their ethnic and geographic origins, in their experiences in the United States and in their educational and financial well-being."

Ugh, why do people have to get all emotional over a little genocide, huh? Why can't we talk about history in a factual way, by insisting that everyone who is dead now was super great, and acting like human beings other than Hitler only started being imperfect at whatever point your American history textbook ends? Also white privilege -- the idea that things are easier for white people because, whatever their problems are, they don't have to deal with systemic racism on top of them -- is totally a myth because there are poor white people in this world.

But wait? How did this get to be all about how black people are annoying Jim Webb today? I thought this op-ed was supposed to be about how super great Andrew Jackson was! Oh, here we are! It looks like Jim Webb's whole argument is mostly that he is not that bad, because also other presidents did bad stuff.

"Self-made and aggressive, he found wealth in the wilds of Tennessee and, like other plantation owners such as George Washington, Thomas Jefferson and James Madison, owned slaves."

And certainly no one has ever criticized them, Jefferson in particular, for owning slaves.

As president, Jackson ordered the removal of Indian tribes east of the Mississippi to lands west of the river. This approach, supported by a string of presidents, including Jefferson and John Quincy Adams, was a disaster, resulting in the Trail of Tears where thousands died. But was its motivation genocidal?

OH. I see! All that genocide was purely incidental! He didn't mean to genocide anyone, so it doesn't matter that it was the end result of his actions! All Jackson wanted, he says, "was to end the increasingly bloody Indian Wars and to protect the Indians from certain annihilation at the hands of an ever-expanding frontier population." Don't you see? He was trying to protect them. By wiping out most of their entire population. As one does. Also, as Jim Webb points out, clearly he didn't like, hate indigenous people because one time he "brought an orphaned Native American baby from the battlefield to his home in Tennessee and raised him as his son."

Also the other presidents did it too, so pick on them, why don't you? LEAVE ANDREW JACKSON ALONE! He didn't intend to murder all the Native Americans! Or anyone! Except for that one time he murdered a dude for maybe having insulted his wife while drunk in a bar! But other than that he was super great and why can't the kids learn about that, huh?

Webb ends his moving tribute to Jackson by quoting Mark Twain, by saying that “to arrive at a just estimate of a renowned man’s character one must judge it by the standards of his time, not ours.” The problem with that, however, is that it assumes that the Indian Removal Act was hailed as a great idea all around, when it was actually pretty darn controversial. There were many people who opposed it, including Davy, Davy Crockett, king of the wild frontier. If there were other people around at that time who managed to figure out that something was a bad idea, then yes, those who didn't should be absolutely be judged for having been on the wrong side of history. Including Andrew Jackson, all those folks in the "ancestral South," and Jim Webb.