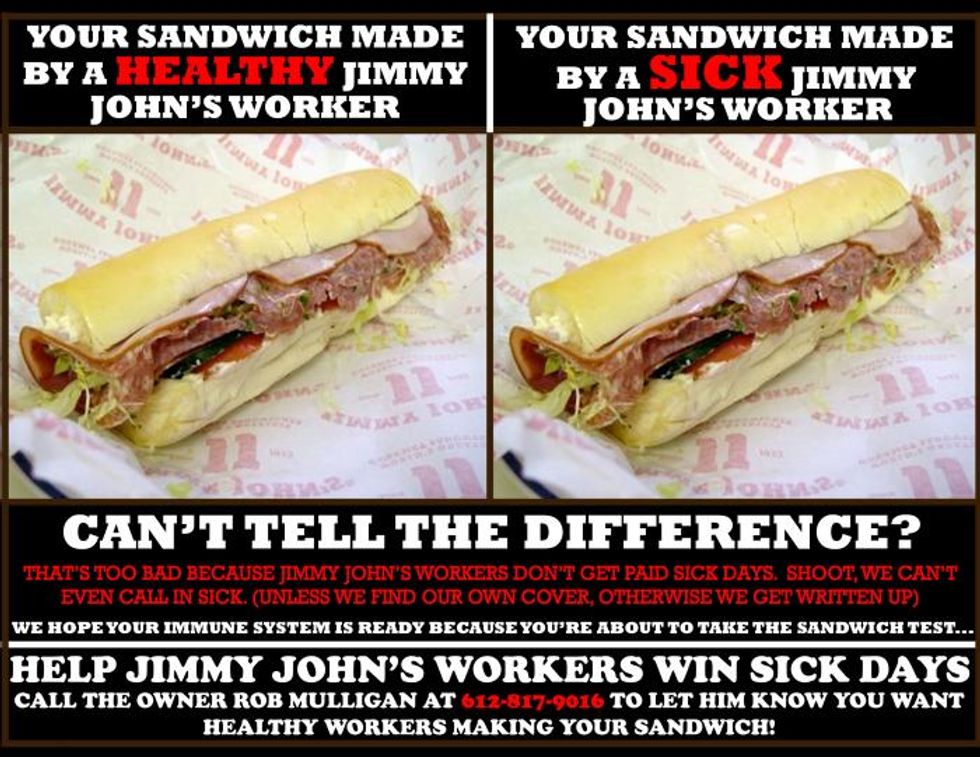 Nobody's especially surprised to learn that working fast food is, at most places, pretty freaking awful. Low wages, no job security, no benefits, not enough hours, no union, terrible bosses, and all the job satisfaction of working a food assembly line, plus smelling like the fryer when you get home. But at least if you can find a better offer, you can move on, in accord with the best tenets of capitalism.

Unless you work at Jimmy John's sammich shops, where not only do their employees get treated to low wages and the other usual crap of fast-food work, they also are required to sign a non-compete agreement in which they promise not to work at any "competitor" for two years. And what is a competitor? Any business within three miles of any Jimmy John's -- and not just restaurants, but ANY business that makes 10 percent or more of its money from sammiches. As Kitchenette's C.A. Pinkham puts it:

Basically, any former Jimmy John's employee can't work at ANY restaurant that serves sandwiches or even any business that provides sandwiches as a side service (10% of their revenue, remember) within three miles of any existing Jimmy John's. A company spokeswoman refused to comment, because Jimmy John's doesn't give even a semblance of a fuck about basic human decency, and they're scared that if they have to publicly comment on this issue, that'll become blatantly obvious.

Normally, non-compete agreements are reserved for executives, so they won't spill company secrets like Coca-Cola's secret recipe or what kind of animals, if any, are actually used to make Taco Bell's "ground beef." But there aren't a lot of secrets that an ordinary sammich slinger would be likely to give up to the competition -- "we use four pickles arranged in a ziggurat" -- and so the more likely explanation is just plain keeping workers under the corporate thumb:

Obviously, this has nothing to do with the divestment of company secrets and everything to do with putting workers in as desperate a situation as possible where they're terrified to lose or leave their jobs. Jimmy John's seeks to control its employees lives, treat them as crappily as they feel like, and prevent them from seeking out any better situation. To say it's an actively, heinously evil practice would be a profound understatement.

Let's also make it abundantly clear that any conservative who expounds upon the importance of free market capitalism and who isn't up in arms over this bullshit is a fucking hypocrite. The entire purpose of that economic system is supposed to be that one rises to the level of one's ability (even if that's not how it usually works in practice) — this includes the notion that a competitor can lure you over with a better job offer if they so choose. But if you are prevented from taking any better job by a ludicrously restrictive agreement you have to sign if you want the first job, we at least need to stop calling it the "free" market, because that's become a total misnomer.

The noncompete agreement is part of a possible class action lawsuit being pursued against the sandwich chain; the company has also been sued for wage theft. Not only does the noncompete clause apply to managers, it also applies to delivery drivers, one of whom is a party in the proposed lawsuit.

That decides us: No Jimmy Johns for us. They've got exactly the kinds of business practices that you'd expect from a company owned by a loathsome rightwing schmuck who, in addition to trying to snuff out unions, also delights in going on big game safaris and contributing buckets of money to Joe Goddamned Arpaio.

On the upside, we now find ourselves with a Socialisms Blog Crush on this Kitchenette place.