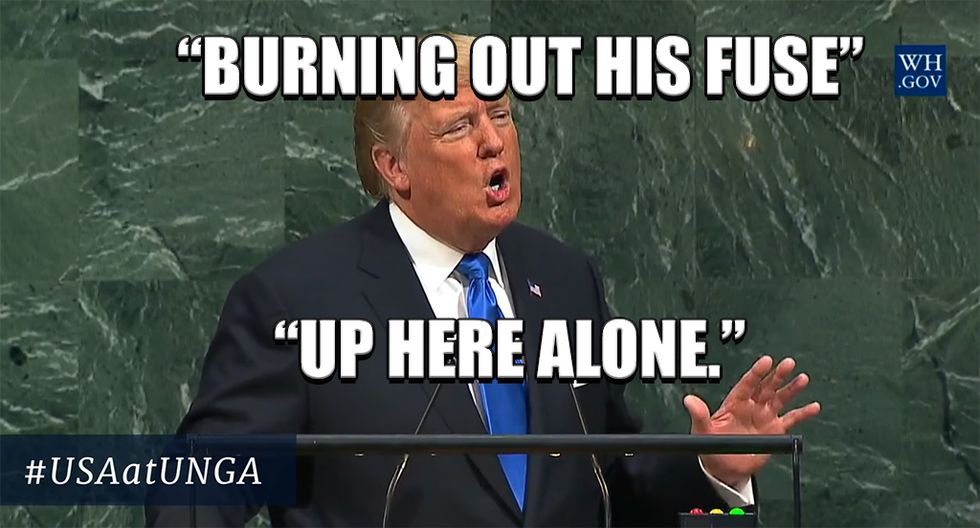 A massive earthquake in Mexico City has claimed the lives of at least 217 people, a death toll that continues to grow. Despite the dangers, people have taken to the streets to help rescuers pick apart the rubble in a desperate search for survivors.

Bob Mueller has already brought in Deputy AG Rod Rosenstein for a little chat with his League of Extraordinary Investigators. [Archive]

Mueller has also brought in Stephen Kelly, a very special kind of "asshole," to keep congressional investigators updated on his own Trump-Russia affairs.

Since Michael Cohen thought it was cute to mouth off about the Senate's Trump-Russia panel, they're dragging his ass in for a full public hearing, instead of an interview, and we can't wait for that shitshow!

The RNC has ALREADY spent about a cool quarter-million Ameros on Trump-Russia legal bills for the president himself, and we'll find out where the rest of that money is going later today. WOO, spreadsheets!

Poor-fucking Republicans are whining that Rand Paul isn't falling in line with the Cassidy-Graham bill, leading to all sorts of hilariously butthurt quotes. However, health advocates and governors are also dragging the bill down into the toilet with a sternly worded letter calling for a bipartisan fix. The GOP leadership responded last night by politely telling them to go and fuck themselves.

Senate Republicans have caved on a budget that adds to the deficit just so that they can get their $1.5 trillion tax cut for the super rich. TL;DR, their plan is to get a loan to pay for their own tax cuts.

The super hush-hush Republican plan to give responsibility for air traffic controllers to a non-profit isn't landing well with other committees who like having control and the ability to hold controllers accountable.

HHS Secretary Tom Price doesn't feel like he needs to explain why he keeps racking up bills for flights on private jets. You expected him to fly commercial like some common prole?

Trump is thinking about "You're Fired"-ing Fed Chair Janet Yellen and replacing her with the swampy son-in-law of his billionaire cosmetics company buddy.

American gun makers are undoubtedly salivating over a Trump administration plan to let Not America buy guns from US arms manufacturers that can't wait to facilitate small wars. After all, it's the American way.

Former President Bannon is coming out with guns blazing, and they're aimed at Luther Strange; he's telling Breitbart staff, "As of now, everyone is working on the Alabama race."

The Republican Governors Association is taking its message directly to the stupid people with a new media venture called "The Free Telegraph" whose entire purpose seems to be to wipe the santorum off Scott Walker.

Interior Secretary Ryan Zinke is honoring sportsmen, hunters, and mother frackers by installing a "Big Buck Hunter" arcade game in the employee cafeteria at the Interior Department. That's right, your tax dollars are turning America into one giant roadside dive bar. You would think we would be for that!

The US Coast Guard has set a new high score for drug seizures at sea; clearly we're going to need a bigger wall.

Historically black college and university presidents decided to skip the annual HBCU meeting for the first time in decades in protest of Trump's white power both sides speech at Charlottesville.

A San Diego suburb voted to privatize its public library despite a large vocal protest, and it's a growing trend in small towns across the country.

USA Today has unveiled a massive journalism project that explores Trump's Tortilla Curtain in great detail. CHECK IT OUT!

Turkish President Recep Tayyip Erdoğan says that Trump told him that "he was sorry" his security thugs are being indicted for getting their knuckles all bloody on American soil this summer, though the White House is denying the apology.

Not America is joining together in an attempt to convince Trump than the Iranian nuclear deal is actually a good thing, and not "an embarrassment to the U.S."

Major telecom companies are covering their asses with lobbyists who are paying bullshit minority groups to try and kill net neutrality with nonsense arguments.

The creator of the Pepe the Frog meme is suing "alt-right" douche nozzles Mike Cernovich and Baked Alaska, as well as Amazon, Reddit, Twitter, Google, and Youtube, for copyright infringement in an effort to kill his own shitpost. In a letter, Cernovich's "lawyer(s)" have responded by saying the creator won't see a dime from Mr. Cernovich, "and if Furie files a suit against Cernovich, [they], "will be delighted to embarrass the fuck out of [Furie]—and set up a malpractice claim..."

Anonymous teevee network sources are squawking that nobody wants to give Sean Spicer a job because of his "lack of credibility." HHAAAAAA.

Melon Trump doesn't like her face on all the highways of Not America, so she made a language school rip down billboards advertising English classes.

Tucker Carlson literally spent a five minute segment talking about witches on his show in an attempt to show that scruples and journalistic ethics are for pussies.

Before reading this rage-inducing profile with Tucker Carlson, make sure to hide all sharp and/or spillable objects. Seriously.

Milo Yiano-whatever doesn't think he needs to pay back the advance from his former book publisher that yanked his book deal.

STOP THE PRESSES! Hillary Clinton supported the super delicious pizza at the center of PizzaGate! #CONSPIRACY!

Jimmy Kimmel EVISCERATED the Cassidy-Graham bill, pointing out that it's worse than Zombie TrumpCare, and he's livid that Sen. Bill Cassidy had the balls to lie to his face. YOU, THIS, WATCH IT RIGHT NOW!

And here's your late night wrap-up! Stephen Colbert had talky time with Hillary Clinton and how SHE would have addressed the UN; Seth Meyers took A Closer Look at Trump's Rocketman crap; The Daily Show noticed Trump's ego might trigger a nuclear holocaust; James Corden says that picture of him kissing Sean Spicer is bullshit. PERIOD.

And here's your morning Nice Time! BABY GOATS in PJs!

We pay our bills the money from nice people like you! Help us out and we'll LURV you bunches!
Dominic Gwinn