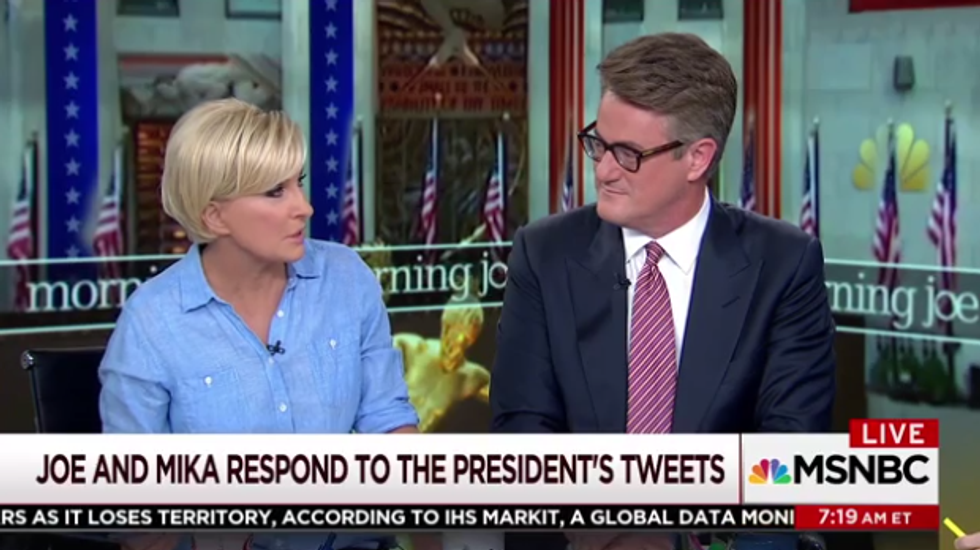 Trump's mortal enemies or something

OH BOY, there is more news about Donald Trump's prurient obsession with Mika Brzezinski's face blood (which is a very important story you should be following while you ALSO are paying attention to how Kris Kobach is spearheading a national voter suppression effort to soothe Donald Trump's deflated ego over his pathetic popular vote loss). Trump tweeted his bullshit lie about Mika B. getting facelift blood all over Mar-a-Lago during New Year's a few minutes after "Morning Joe" ended Thursday morning, so they didn't get to respond in real time. But good golly, they responded on the show Friday morning, and in an op-ed for the Washington Post, and they have a story to tell about just how creepy and disgusting Donald Trump actually is.

First of all, they need you to know they are personally fine. They were raised by their mamas to be Ford Tough, so don't you worry about them. They'd much rather you worry for America, because JESUS FUCK, Donald Trump has LOST HIS GODDAMN MIND. In case you don't understand what they are getting at, here is the hed for their WaPo piece:

They are just saying.

President Trump launched personal attacks against us Thursday, but our concerns about his unmoored behavior go far beyond the personal. America’s leaders and allies are asking themselves yet again whether this man is fit to be president. We have our doubts, but we are both certain that the man is not mentally equipped to continue watching our show, “Morning Joe.” [...]

The president’s unhealthy obsession with “Morning Joe” does not serve the best interests of either his mental state or the country he runs. Despite his constant claims that he no longer watches the show, the president’s closest advisers tell us otherwise. That is unfortunate. We believe it would be better for America and the rest of the world if he would keep his 60-inch-plus flat-screen TV tuned to “Fox & Friends.”

Better yet, he could turn his TV off and go be the president, but LOL he's fundamentally unqualified for that job.

They write that Trump's attack was just part and parcel of his inability to treat women with respect, and assert yet again (it's been a running theme lately) that they're worried Trump's brain has genital warts.

Now, you ready for the really creepy part? They allude to this in their WaPo piece, but it turns out that this year, Trump and his White House have been trying to blackmail them, to get them to stop criticizing Trump on TV. The National Enquirer, owned by Trump's pal David Pecker, was working on a SALACIOUS STORY about the lovebirds, and White House staffers were constantly harassing them, saying if they would just call President Fuckhead McClownFarts and say how sorry they were, he would kill the story. Joe and Mika told them all to eat a bag of dicks: