Joe And Mika HATE This One Chick 'Steve Bannon', Like OMG Becky 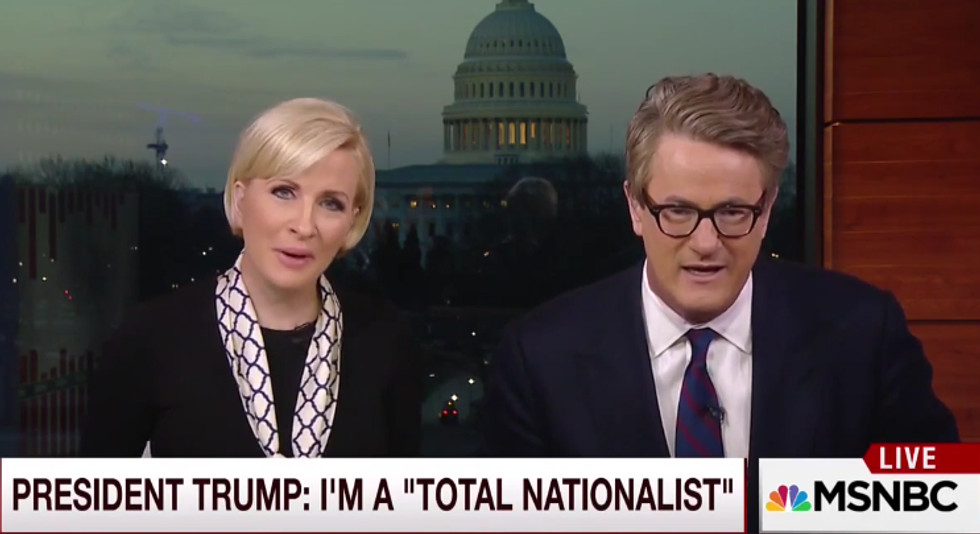 FIGHT FIGHT FIGHT FIGHT FIGHT! Joe and Mika, stars of the MSNBC cooking show "Morning Joe," continue to be GRRR MAD at the Trump regime, as they have recently noticed that Trump and his minions have more than a whiff of autocratic, dictatorial tendencies, and that is not what America is all about, now is it? They previously went after that one mean girl Kellyanne Conway for being a lying liar who constantly lies. And they lost their marbles over Trump adviser Stephen Miller, the unfuckable young twit who believes the president's power is NOT TO BE QUESTIONED.

Now they are fighting with Trump puppetmaster Steve Bannon, a drunk, pockmarked old white supremacist whose face resembles an untreated case of genital herpes, over whether Stephen Miller is beautiful and wonderful, or is he, as Scarborough memorably noted, a "Little Napoleon." It started in a Bloomberg article that labels the yucko Stephen Miller as Trump's "Minister Of Truth." Let's read some snarking!

Bannon says Miller is being targeted by the media to thwart Trump. “When Joe Scarborough and the mainstream media attack Stephen Miller,” says Bannon, “it’s just like any opposition party. They’ll try to take out some of the best young people in any organization. Stephen is a tough guy, I can tell you from the campaign. He’s used to being absolutely vilified.”

Um, yeah, Stephen Miller is 31 years old, and if he's been "absolutely vilified," it's because he treats Donald Trump like an infallible god-king, and also because he was that kid in high school and college who, for reasons only known to the therapist we doubt he has hired, was a total white supremacist. Also, we wonder if by "absolutely vilified," Bannon also means that nobody in high school would ever have human sexual intercourse with Miller, because PEE-YEW. Possible!

In a statement, Scarborough called Bannon and Miller “opposition party hacks [who] humiliate themselves by being so ignorant of American history and the Constitution that they declare in their big-boy voices that the president’s powers are not to be questioned.”

MEEEEEE-OW. Guess Scarborough doesn't want to be invited to Mar-A-Lago ever again, maybe because deep down in his ding-dong Republican brain, he has a soul. Whoa if true, but it might be true!

Tuesday, Mika and Joe doubled down on their hatred for Bannon, taking special aim at his status as a self-proclaimed "Leninist." Let's watch our "Morning Joe" together, and maybe we will transcribe some of the best lines for you, if we are in the mood?

JOE: Wait wait wait the same Vladimir Lenin who started the Soviet state that killed 50 million of its own people and enslaved 300 million?

MIKA: That's the one!

JOE: I'd be more comfortable if he had said George Washington.

Joe and Mika are talking about this article from The Daily Beast, that came out August 21, 2016. Way to stay on top of the breaking news, Joe 'n' Mika! But yes, it does say this, and Mika reads from it:

Shocked, I asked him what he meant.

“Lenin,” he answered, “wanted to destroy the state, and that’s my goal too. I want to bring everything crashing down, and destroy all of today’s establishment.”

Yeah, that's not creepy or anything! Anyway, Joe and Mika have just discovered this information, so let's watch as they catch up to the rest of us:

MIKA: All righty! HAVE A GOOD DAY, EVERYBODY!

JOE: This is so bizarre.

JOE: It would be hard to find a more villainous historical figure this side of Stalin or Adolf Hitler.

NO SHIT, Y'ALL! Even you, idiot boy Mark Halperin!

We should also note that both Mika and Joe referred to Bannon as "President Bannon" later in the segment, which is LOLOLOLOL.

God, Joe and Mika, we love you two, we really do. And we're sincerely happy that you seem to be really getting it through your heads that this Trump regime is scary and awful. Maybe you are secretly feeling bad for how you used to act as informal advisers to the "president." (Maybe you still are advising him! But if you are, he's not listening to you very much, now is he?)

We have very little else to say about this, except that Joe and Mika really should read their Wonkette every day, and maybe then they won't be like "OMG FOR SHOCKED" every time they learn something horrifying about Donald Trump that we first reported MONTHS ago.

Wonkette is fully reader-supported, and way ahead of the "Morning Joe" kids! If you liked this artlcle, please support us, with dollars!