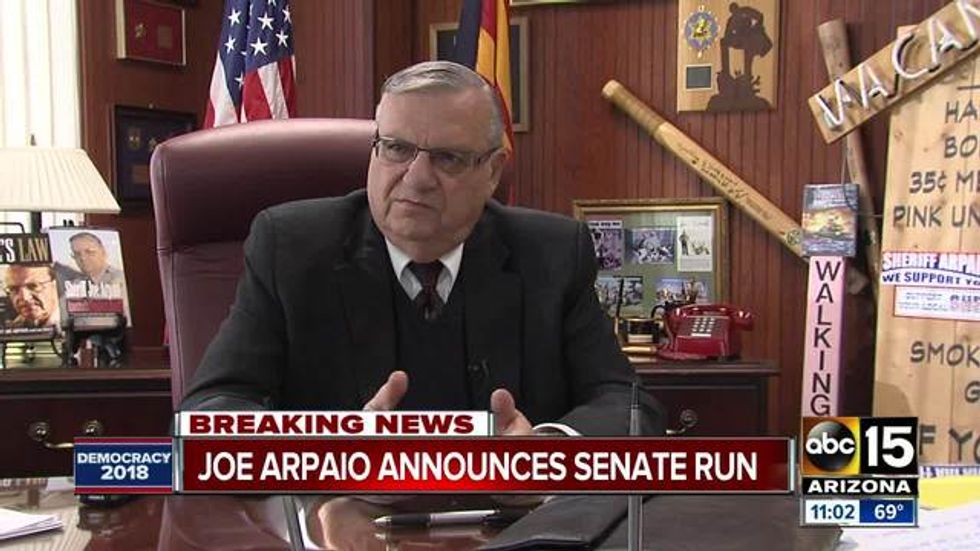 Also will introduce a bill to make Hillary Clinton live in a tent.

Disgraced former Maricopa County Sheriff Joe Arpaio, who's running for the US Senate seat Jeff Flake is giving up, promised a group of fans at the Western Conservative Conference in Phoenix last weekend that once he's a member of the World's Greatest Deliberative Body, he'll finally be able to address one of the most burning issues of our age: Barack Obama's phony birth certificate. And yes, he got applause for it. Look how coyly he brings up the subject in this snippet from a video originally posted to the rightwing Tru Conservative TV YouTube channel:

Arpaio reconstructed for the small crowd that glorious time when he introduced Donald Trump at a Phoenix rally in 2015, pointing out that he and the Great Man shared three things: the same birthday, the same (lawless) dedication to cracking down on Messicans (though Arpaio said "illegal immigration" because he has to be all statesmanlike and shit), and -- of course -- a deep and abiding belief that Barack Obama is a foreigner from Muslimland. And like Trump, Arpaio plays at not naming exactly what he means, at least for a few seconds, since some people might miss it:

Of course, I talked about another thing that made a little news. I don’t talk about it anymore -- until I become the US senator. [applause] The Tea Party got me hooked in something that's followed me around for five years. But it has something to do with a document. [laughter] If I ask you guys -- I’m a nothing now, but if I was still the sheriff I could ask for your birth certificate. [bigger LAUGHTER, because that shit's funny!]

So I’m kind of dropping that right now, but I’m going to tell you something: 100 percent we proved that’s a fake document. One hundred [applause].

He then muttered some stuff about how he didn't just mean computer stuff, but actual SCIENCE, and he had to go to ITALY to "get expert advice," after which he trailed off into claiming he'd also invented the phrase "the Silent Majority," which will be a hell of a surprise to Pat Buchanan, who took credit for getting Richard Nixon excited about the phrase (which was also used by George Meany in 1967, and before that, Warren G. Harding in 1920). Not that we'd begrudge Arpaio for wanting to identify with Nixon -- given the chance, he'd surely like to secretly bomb Cambodia too.

His audience seemed very appreciative of Arpaio's promise to finally nail down Barack Obama's birth certificate once he has real power, which makes perfect sense for the current crop of wingnuts. It's not enough, he seems to be saying, to simply reverse as many of Obama's policies as possible. The hardcore rightwing loonies genuinely dream of the great day when they can declare Obama's two terms in office null and void, finally removing him from history altogether. Only then will they have their country back -- a country that never, ever had a black president.