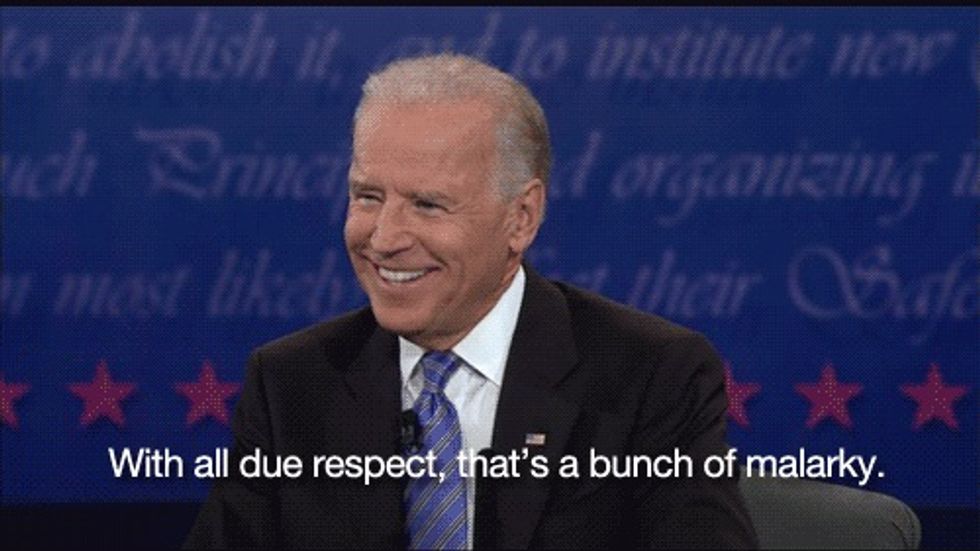 News from Overseas! Or a really long drive South, at least. The White House is categorically denying that Old Handsome Joe Biden tried to overthrow the government of Venezuela, no matter how many sad breakup songs Venezuelan President Nicolas Maduro requests the DJ to play.

U.S.-Venezuelan relations have been lousy ever since the George W. Bush administration actually did support a coup attempt against Hugo Chavez in 2002. More recently, Maduro and Biden shook hands about a month ago during a brief meeting at which "both leaders expressed an interest in warmer relations." Apparently, Maduro thought that was a declaration of undying love, and now he feels betrayed, claiming in a televised address that Biden had told Caribbean leaders at a recent energy summit in Washington to stop supporting Maduro and write mean things about him in their Burn Book.

"What Vice President Jose Biden did has no name," Maduro said. "Vice President Biden: Look me in the eyes. I saw you in Brazil, I gave you my hand. You, who said this is a new era for relations in Latin America, were going to conspire against Venezuela."

The AP reports that when Biden and Maduro met on January 1 at the inauguration of Brazil's new president, they briefly chatted and got along well:

A photograph of Biden and Maduro smiling warmly at each other became a meme in Venezuela, and Maduro described the meeting as "cordial." U.S. officials said after that meeting that Biden discussed ways Venezuela could pursue better relations with the U.S., including by releasing political prisoners.

The U.S. government, for its part, issued a cold denial that Biden and Maduro had ever been going steady and that the handshake in Brazil was just Joe being his usual lovable self, but that America and Venezuela can still be friends, just not that kind of friends:

"President Maduro's accusations are patently false and are clearly part of an effort to distract from the concerning situation in Venezuela, which includes repeated violations of freedom of speech, assembly, and due process," Biden's office said in a statement.

Maduro, on the other hand, has reportedly been staying in his room and listening to the Pet Shop Boys' "What Have I Done to Deserve This" all day on auto-repeat.