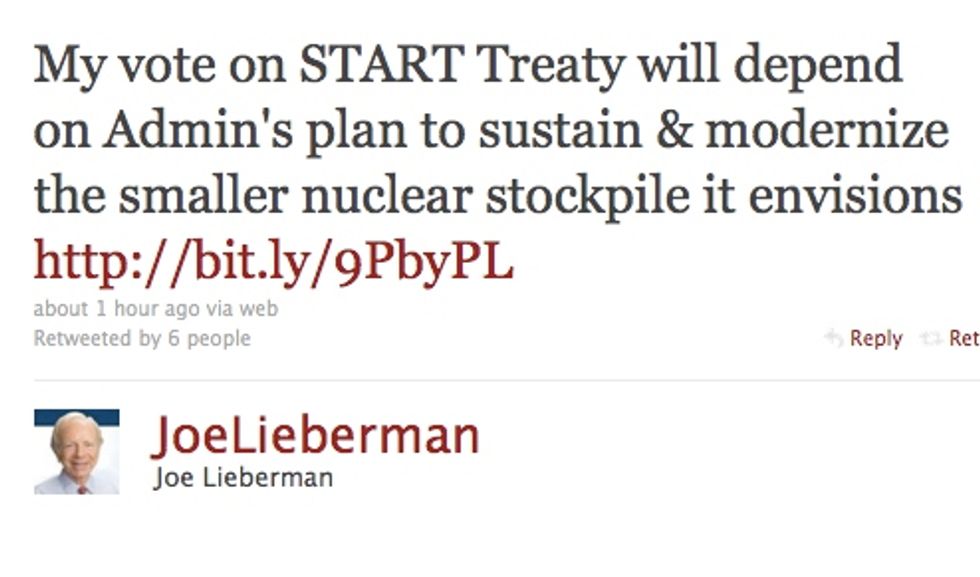 Oh crap, problem guy's making problems again, or at least a Modest Fuss. We've read his statement (WHY? WHY?) and can already envision the upcoming compromise that the White House will agree to immediately.

I have always supported the longstanding, bipartisan effort to reduce the number of nuclear weapons in the world. I believe, however, that any reductions in our nuclear stockpile must be accompanied by an appropriate modernization plan to bring our aging nuclear weapons complex, our warheads, and our delivery systems up to 21st century standards. My vote on the START Treaty will thus depend in large measure on whether I am convinced the Administration has put forward an appropriate and adequately-funded plan to sustain and modernize the smaller nuclear stockpile it envisions.

I also remain deeply concerned that -- regardless of the merits of the NPR and START on paper -- we are losing the real world fight to prevent rogue regimes like Iran from acquiring nuclear weapons. If Iran continues on its current trajectory and crosses the nuclear threshold, it will inflict irreparable harm on the global nonproliferation regime.

In other words, drop two (2) nukes on Iran, and he'll sign the damn Russian Bear's treaty. We need to look past our differences and forge compromises, you guys!