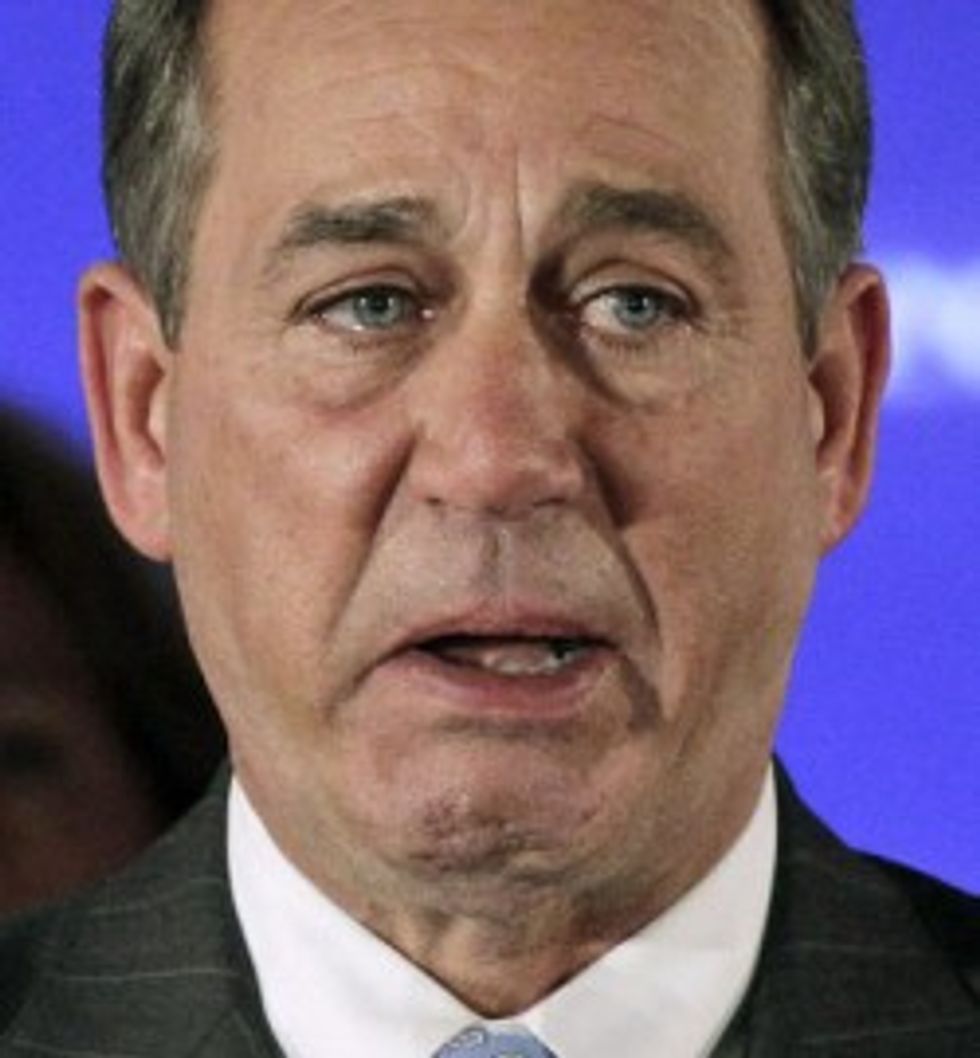 Look at President Obama, prancing around, putting forth “unserious” proposals to keep us from falling off the so-called “fiscal cliff.” What—did he win an election or something? Because that’s what he’s acting like, and John Boehner wants him to TAKE IT DOWN A NOTCH MR PRESIDENT SIR, and propose something that’s more like what the GOP would propose if they were going to bother to propose something, which they haven’t. John Boehner so SO MADhe cried and reminisced about when he used to get to hang out at children's gymshe wrote a letter about it patiently explaining to the president why he is wrong.

Dear Mr. President, he begins, we gerrymandered congressional districts so that we could get a majority in the House and if that doesn't mean Americans want us to personalize privatize Medicare and Social Security, I don't know what does. Because "regrettably,"

your proposal contains little in the way of common ground. The proposal calls for $1.6 trillion in tax revenue...[and] four times as much revenue as spending cuts, in stark contrast to the "balanced approach" on which you campaigned...We cannot in good conscience agree to this approach, which is neither balanced nor realistic. If we were going to take your Administration's proposal at face value, we would counter with House-passed Budget Resolution. It assumes an overhaul of our tax code with revenue remaining at historically normal levels proposes structural forms to preserve and protect the Nation's entitlement programs...

In other words: HOW DARE YOU DO WHAT YOU SAY YOU WERE GOING TO DO. Also, you are not savaging our nation's poor and elderly nearly enough. Here, look at this plan we drafted yesterday, it forces everyone to retire later, raises the age of Medicare eligibility, pushes care for Poors onto the states, takes food away from Poors' kids. Also it doesn't raise taxes on people like Mitt Romney (or coincidentally, John Boehner) that's how you know it's Serious.

Sadly, however, this proposal was not Serious enough, and now the Right is telling them it abandons their Core Principles. Is the joke on John Boehner?

No, as usual, it's probably on us, but as of yet we don't know how.