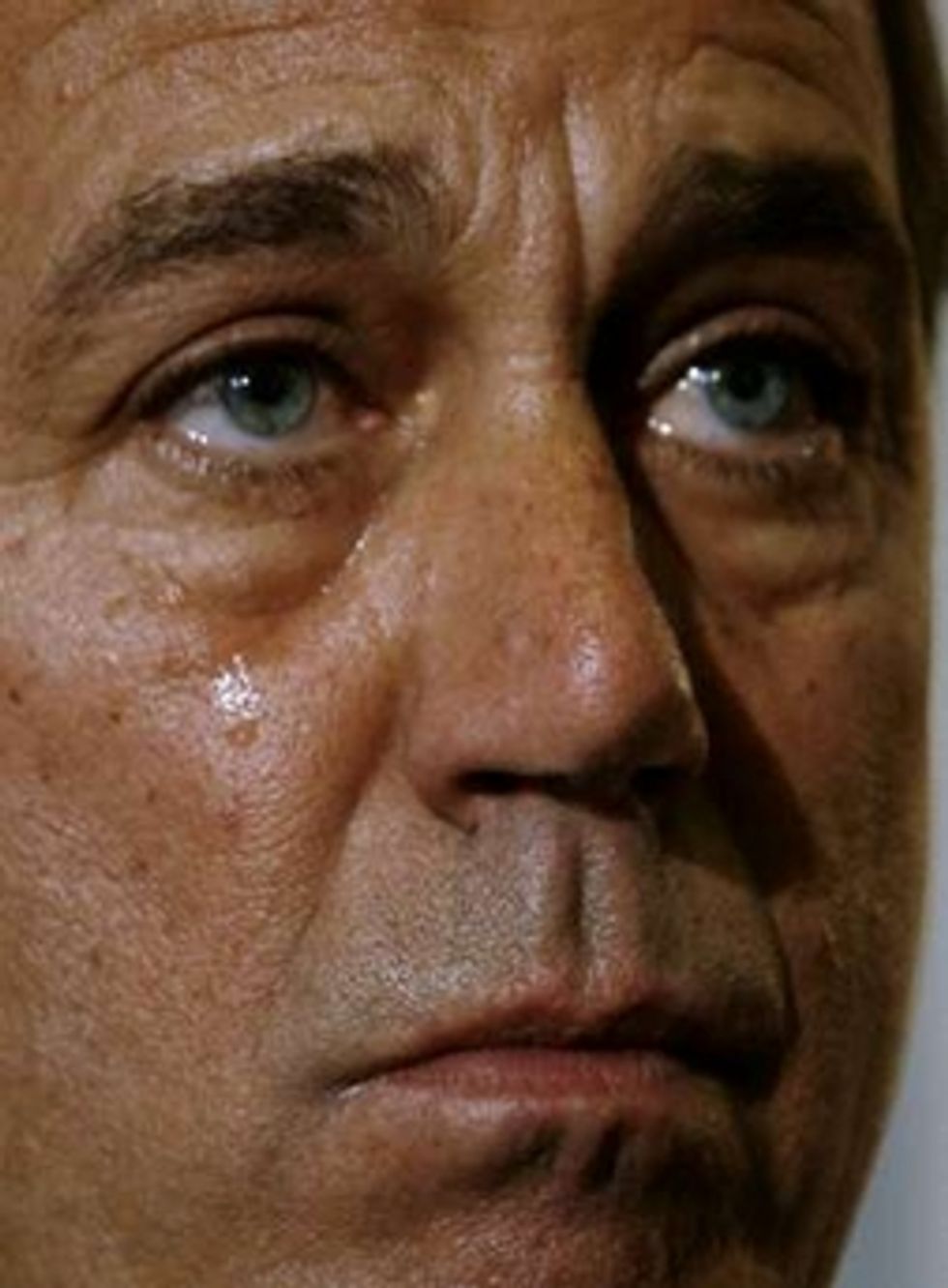 Pity poor Weeper of the House John Boehner. He only just got the memo that conservatives are ... how shall we put this delicately? ... completely bugfuck insane:

House Speaker John Boehner (R-OH) on Thursday held firm in his criticism of outside conservative groups after a war of words Wednesday, questioning their credibility and saying they've gone "over the line" for attacking a budget deal brokered by Rep. Paul Ryan (R-WI) and Sen. Patty Murray (D-WA).

"Frankly I think they're misleading their followers. I think they're pushing our members in places where they want to be. And frankly I just think they've lost all credibility," he told reporters at his weekly press conference Thursday.

Boehner is none too pleased that the tentative budget deal in which conservatives get basically everything they want -- more money for the military, no new taxes, plus some extra screwing of government workers, just for kicks, and a promise to maybe think about extending unemployment benefits at a later time maybe wink wink -- is still making the kamikaze wing of the Republican Party shake its tiny fists of rage just because the deal does not include making Obama impeach himself, making poors even poorer because that'll learn 'em to be poors, or drowning the government in a bathtub.

As soon as the deal was announced, and before anyone even knew what was in it, conservative deep-thinkers from the Club For Growth, Heritage Action, and FreedomWorks started getting all whiny and insisting it is a Bad Thing and John Boehner is a Bad Man who is trying to destroy the party and the Republic itself and other similar arglebargling sounds. And hoo boy does Boehner hate when unreasonable people get all kinds of critical about stuff they don't even understand:

"There comes a point when people step over the line. When you criticize something and you have no idea what you're criticizing, it undermines your credibility."

Like, Boehner would totally be annoyed with this asshole (spoiler: it is John Boehner), who was criticizing a thing he clearly did not understand.

But Boehner seems to have had a moment of clarity, or maybe just sobriety, and it has occurred to him all of a sudden that these conservative groups he loves very much when it is convenient to do so -- like when they endorse him, for example -- are maybe kind of terrible and are maybe kind of making his beloved party look crazy and maybe kind of everything is their fault.

"You know, they pushed us into this fight to defund Obamacare and shut down the government," he said. "It wasn't exactly the strategy I had in mind."